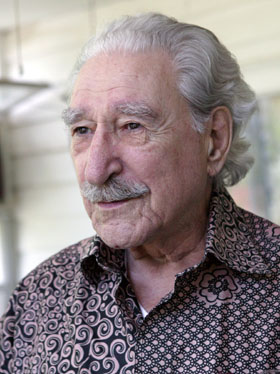 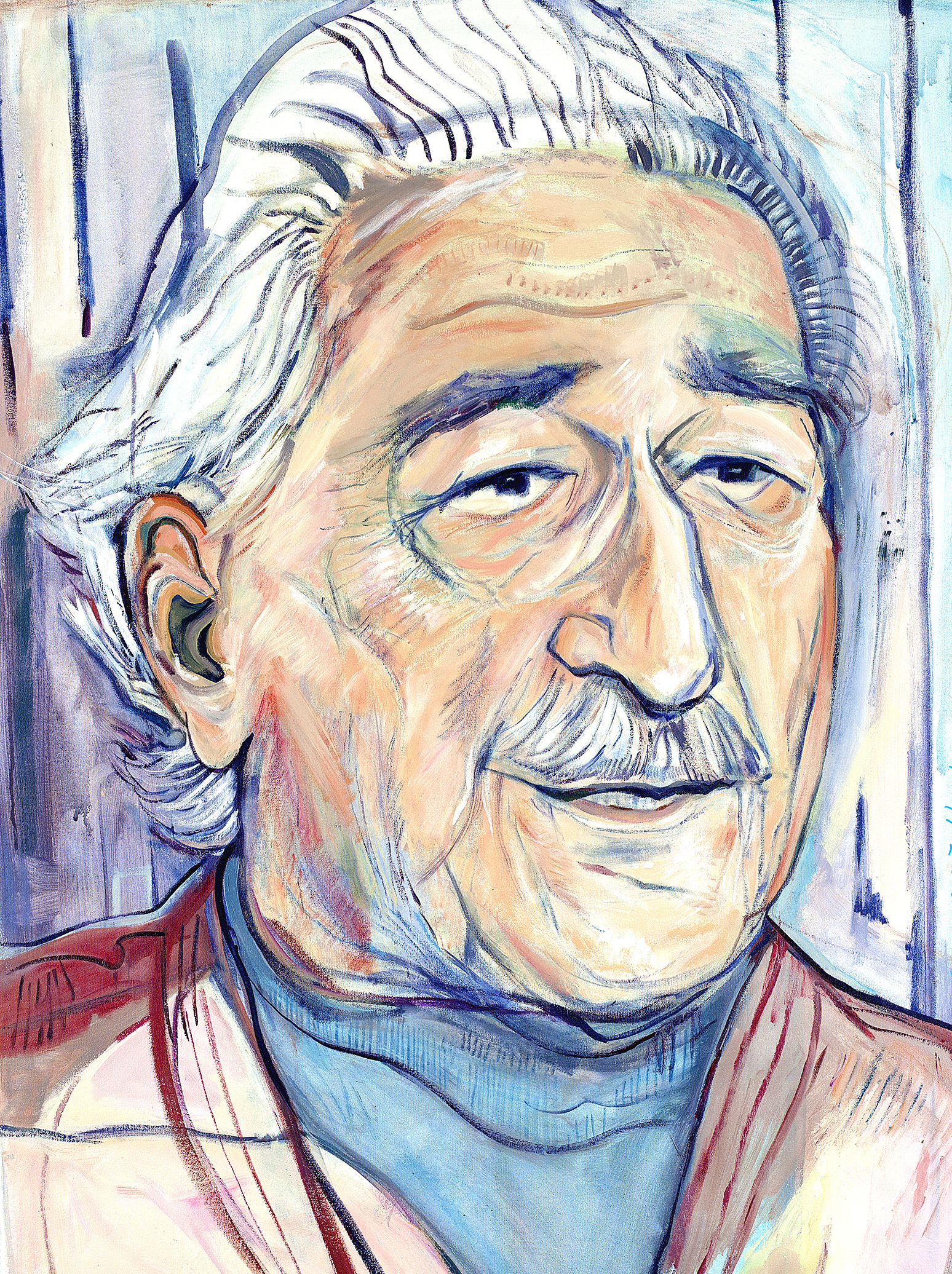 Michel Chartrand, union activist, printer and Québec politician (born 20 December 1916 in Outremont, QC; died 12 April 2010 in Montréal, QC). The 13th child in a family of seven boys and seven girls, Michel Chartrand attended primary school at the Académie Querbes, run by the Clerics of Saint-Viateur, began his classical studies (see Collège classique) at the Collège Jean-de-Brébeuf, and then continued his studies as a boarder at the Séminaire de Sainte-Thérèse. At 17 years of age, he became a Cistercian monk at the Oka Abbey, but he left two years later for health reasons.

While taking courses in typography at the Brothers of the Christian Schools, Chartrand volunteered with Jeunesse indépendante catholique (JIC), a movement of Catholic youth acting as lay evangelists. He also became secretary of the Jeunesse patriotes, a nationalist group whose aim was the creation of a French-Canadian corporatist state. However, Chartrand was opposed to the Jeunesse patriotes’ support of Maurice Duplessis during provincial elections. As a result, he joined the Action libérale nationale (ALN). This party had just been formed by Paul Gouin, a Union Nationale dissident, and Chartrand became a political organizer for the party in 1938.

While still active in the JIC and the Jeunesse patriotes, Chartrand enrolled in the faculty of social sciences, economics and political science at the Université de Montreal, attended history courses given by Abbé Lionel Groulx, and went to Father Georges-Henri Lévesque’s École des sciences sociales. After one month of military training in 1941, Chartrand was discharged from the Canadian Officer Training Corps after he refused to fill out forms that were written in English only.

Determined to work for social causes, Chartrand founded a clothing co-operative and became an activist in the co-operative movement “Maître chez nous.” It was at this point that he became friends with Alfred Rouleau (future president of the Desjardins Group). Together, they travelled to Lac Saint-Jean, where they tried to start up co-operative clothing factories. On 17 February 1942, Chartrand married Simonne Monet, public relations for the Jeunesse étudiante catholique, another Catholic youth evangelism movement. Chartrand and Monet had seven children together.

While he worked as a typographer at the Stella printing company, Chartrand was an activist with the Ligue pour la défense du Canada, which opposed conscription. He became a founding member of the Bloc populaire canadien and political organizer for Jean Drapeau, the candidate favoured by conscripts. Chartrand himself was a candidate for this party at the June 1945 election.

The beginning of the 1949 asbestos miners strike at Thetford Mines and Asbestos, Québec, marked a turning point in Chartrand’s life. At the invitation of representatives of the Federation of Catholic Workers of Canada (FCWC), he went to Asbestos to speak to the strikers. From then on, Chartrand was involved in the union movement (see Union Centrals, Québec). He became an organizer for the Fédération nationale du vêtement and business agent for three other union organizations: the Conseil central de Shawinigan, the Syndicat de Rubin in Sherbrooke, and the Syndicat du commerce.

Chartrand was arrested and faced trial a number of times during 1952 as a consequence of his involvement in the Alcan workers’ strike in Shawinigan, the mobilization of workers at Wabasso, and the strike by employees at Dupuis Frères. (See also Working Class History – Québec)

As founding member of the Staff Representatives Union of the FCWC, Chartrand was elected to the first executive of this union, which had hired him as an advocate in 1953. As technical advisor to the Conseil central de Shawinigan in 1955, he participated in numerous strikes in the area, was jailed seven times, and hosted a series of open line radio shows in the Mauricie region.

Chartrand was then put in charge of union education for steelworkers in the Fédération des travailleurs et travailleuses du Québec (FTQ) (Québec Federation of Labour) in Rouyn-Noranda. Despite being courted by Jean-Paul Geoffroy, Gérard Pelletier and Pierre Elliott Trudeau, Chartrand stayed with the Co-operative Commonwealth Federation (CCF), a socialist political coalition — Thérèse Casgrain was president of the Québec wing. Following the party’s national congress in 1956, the CCF became the Parti social-démocrate (PSD) in Québec, and Chartrand became its provincial leader.

While acting as business agent for the workers’ union at the Dupuis Frères store in Montréal, Chartrand used his vacation time to go to Murdochville and support strikers at the Gaspé Copper Mines (Noranda Inc.), who were members of the United Steelworkers (see Murdochville Strike). He spoke at numerous union gatherings and made a series of radio broadcasts in Matane and New Carlisle, but this involvement with a rival union resulted in Chartrand being fired by the FCWC when he returned from Murdochville.

Chartrand was a candidate for the PSD in Arvida in the 1958 federal election and won a moral, if not an actual, victory by receiving 7,042 votes. After being defeated again in a by-election in Lac Saint-Jean, Chartrand established a printing company, Les Presses sociales. He published collective agreements and volumes of poetry and essays, as well as the magazine Our Generation Against Nuclear War.

After a ten-year absence, Chartrand returned to union activism in 1968. He was hired as the head of trade union education programs and occupational health and safety by Florent Audette, the executive director of the Montreal Building and Trades Union.

The CCSNM had 60,000 members who were also affiliated with the Confederation of National Trade Unions. Chartrand was also elected as president of the Caisse populaire des syndicats nationaux, the credit union for the national unions.

As CCSNM president, Chartrand’s goal was to mobilize activists from both the trade union movement and grassroots organizations. He established an advisory service to help workers ensure that legislation concerning health insurance, social assistance, and work-related injuries was enforced in the workplace. The CCSNM also created an assistance and information service concerning tenants’ rights, which led to the creation of a standard lease agreement. Chartrand was personally involved in founding the Front d’action politique (Political Action Front), a municipal party in opposition to then-mayor Jean Drapeau. Chartrand also helped found the Front du Québec Français and traveled across the province making speeches denouncing Bill 63 on promotion of the French language.

With the invocation of the War Measures Act following the kidnapping of British trade commissioner James Richard Cross and Québec Labour Minister Pierre Laporte by the Front de libération du Québec (FLQ), Chartrand was arrested on 16 October 1970. Accused of sedition, he was imprisoned along with Charles Gagnon, Jacques Larue-Langlois, Pierre Vallières and lawyer Robert Lemieux. Chartrand and his fellow inmates represented themselves in the highly publicized Procès des cinq (trial of the five). After serving four months in prison, Chartrand was released on 17 February 1971. Following his release, Chartrand was invited to speak about the political situation in Québec at universities across Canada, from Fredericton to Vancouver.

In 1972, he participated in various protests staged by Québec public servants. The general strike organized by the Front commun intersyndical (inter-union common front) led to the imprisonment of trade union leaders Marcel Pépin of the CNTU, Louis Laberge of the QFL, and Yvon Charbonneau of the Québec Teachers Corporation. (See Common Front Strikes) Chartrand helped organize the major protest of 1 May 1972, during which 30,000 demonstrators demanded the union presidents’ release.

At the 15th annual congress of the CCSNM, Chartrand proposed that the Council help organize the Congrès international de solidarité ouvrière (International Congress for Workers’ Solidarity). His proposal passed, and that led to the establishment of the Centre international de solidarité ouvrière (international workers’ solidarity centre). In June 1975, hundreds of representatives from Québec, the United States, Arab nations, the Caribbean, and Africa attended this congress, which Chartrand chaired in Montréal. He then participated in another Common Front walkout, which was followed a few months later by a general strike against the wage freezes implemented by Prime Minister Pierre Trudeau.

At the 1978 congress, Chartrand did not stand for re-election as president of the CCSNM. Instead, he continued in his fight against Bill 17 on occupational health and safety, opposing Louis Laberge, president of the QFL and member of the board of directors for the Commission de la santé et de la sécurité du travail (CSST) (Québec occupational health and safety board).

In his campaign for a guaranteed citizenship income, Chartrand gave lectures to grassroots and labour groups as well as to student and professional associations. Describing himself as a trade unionist, anti-poverty activist, and lecturer, Chartrand jointly published the Manifeste pour un revenu de citoyenneté (1999) with Michel Bernard.

With his oratory talent and independent mind, Chartrand is recognized as a powerful opponent of capitalism and a fervent defender of social justice. An anti-establishment hero, his passionate and widely broadcasted views resonated not only with blue-collar workers but also with white-collar workers, intellectuals, and artists. Chartrand was an honest and generous man with a fighting spirit. He boldly proclaimed his opinions on freedom and equality, refusing to compromise in the pursuit of his ideals. He became a powerful symbol of courage and integrity for several generations of Québécois.

In 2011, Chartrand was posthumously awarded an honorary doctorate from the Université du Québec en Outaouais for his contributions to trade unionism and labour relations in Québec.