Representatives of the founding member countries of NATO, including Canada, meet in 1949.

Canada as a Middle Power

In the 1940s, as Canada developed a foreign policy that was increasingly independent from Britain’s, many Canadian diplomats began to see their country as a middle power on the international stage. Although Canada was not as prominent as Britain or the United States, Ottawa nonetheless felt that it could influence international events through moral leadership, peacekeeping and the mediation of international conflicts.

Many historians of Canadian foreign affairs have characterized the postwar period (from 1945 until approximately 1960) as the “golden age of Canadian diplomacy.” Against the backdrop of an escalating Cold War between the US and the Soviet Union, Canada occasionally pursued an agenda of de-escalation that contrasted with the more hawkish inclinations of London and Washington. As former ambassador to the US Allan Gotlieb has stated, Canada was “comfortable in our role as a middle power… trying to dull the edges of the instruments of the Cold War, seeking compromise and advocating moderation, yet with our roots firmly grounded in the Western camp.”

A centerpiece of Canadian diplomacy throughout these years was Ottawa’s close involvement with the United Nations (UN). In 1943, Canada had been invited to establish the UN alongside the United States and United Kingdom, and played a remarkably prominent role in this process.

Canada’s leading diplomats throughout these years included Humphrey Wrong, Lester B. Pearson and Norman Robertson, all of whom worked in the Department of External Affairs, as well as Paul Martin, Sr., who served as secretary of state at the end of the war. 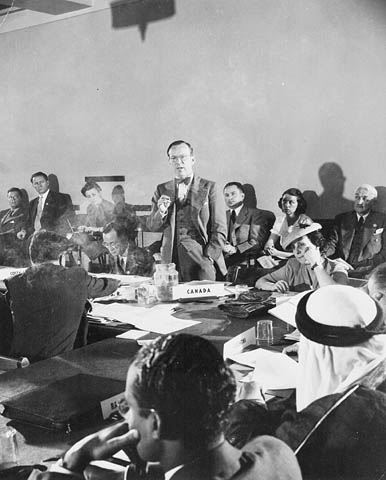 Whereas the US and Britain set the agenda for postwar planning, these diplomats advocated for Canada’s inclusion in ways that would ultimately benefit other small and middle powers. Wrong made an important contribution in this respect when he proposed what historians and political scientists dubbed “the functional principle.” He articulated the idea in a 1942 letter to Robertson suggesting that “the influence of the various countries should be greatest in connection with those matters with which they are most directly concerned.” Canada, he argued, should therefore have some influence on the Allied committees administering industrial policy during the Second World War, where Canada was making a significant contribution.

Some analysts, such as Paul Heinbecker, have argued that Wrong’s functional principle became a broadly accepted idea among the Allied governments as they constructed the UN, which paved the way for the inclusion of smaller powers in the organization’s decision-making bodies. Others, including historian Adam Chapnik, are skeptical that Wrong’s approach had much impact on the organization.

Historians do generally agree, however, that Ottawa’s pre-war foreign policy had been unambitious and mundane, but that in the final years of the Second World War, it suddenly became the leading representative of small and middle powers.

At the time of the UN’s formal establishment in 1945, Pearson was a leading candidate to be its first Secretary-General. He would be considered again in 1950 and 1953, but each time was vetoed by Soviet representatives who worried that he would favour American interests.

Nonetheless, Pearson remained closely involved in the UN. Following the war, he served as Canada’s minister of external affairs, and became president of the UN General Assembly in 1952 and 1953, during which time he assisted in the cessation of the Korean War. 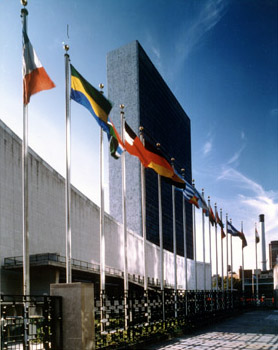 Four years later, he played a leading role in the UN’s peacekeeping mission during the Suez Crisis, for which he won a Nobel Peace Prize. This was the first time that Ottawa openly challenged London’s hostility toward another country — in this case Egypt — making it a major turning point in the history of Canadian foreign policy.

Throughout these years, Canadian diplomacy was also characterized by a remarkable degree of independence from Washington. One of the most notable developments in this respect was the Diefenbaker administration’s rejection of Washington’s request to station nuclear missiles in Canada (see Bomarc Missile Crisis).

But despite Canada’s achievements in the field of peacekeeping and conflict mediation, it was at the same time firmly aligned with the US, as Gotlieb suggests. This fact was reflected in Pearson’s career, given his active support of the North Atlantic Treaty Organization (NATO), and his decision — after succeeding Diefenbaker as prime minister — to accept the nuclear missiles on Canadian soil. 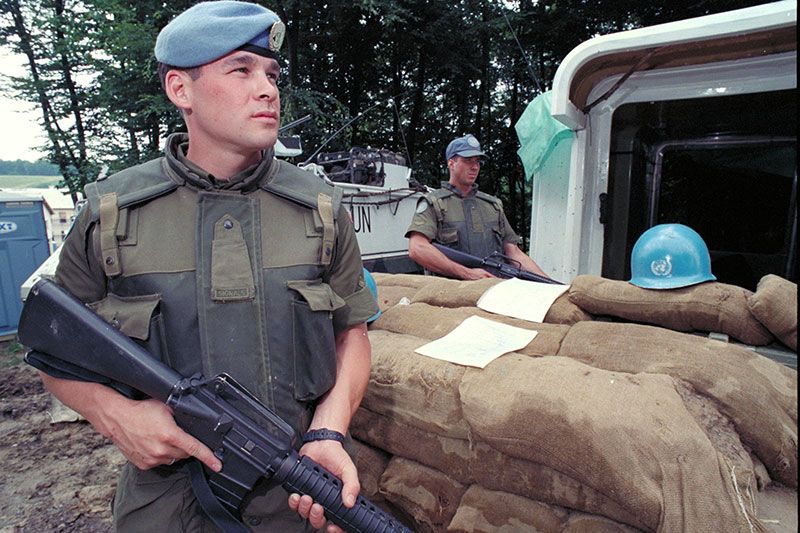 As a foreign policy doctrine, the idea of middle power has been interpreted in many ways. When the idea came to the fore among Canadian diplomats and journalists toward the end of the Second World War, some suggested that Canada might lead a new international coalition by defending the interests of medium-sized states. The Toronto Star published a column in 1945 stating, “As a ‘middle’ power, neither ‘great’ nor ‘small,’ [Canada] has influence among other countries of that general classification and will probably be one of their chief spokesmen… not selfishly but for the common good.”

A block of middle powers never fully materialized, however, as the majority of these states were pressured to align either with NATO or the Soviet-dominated Warsaw Pact. Canadian diplomats at the UN occasionally worked with mid-level states such as Egypt and Yugoslavia, which were closer to Moscow than Washington, but this typically occurred on a case-by-case basis.

Other proponents of the middle power idea in the postwar years suggested that Canada’s status situated it well to mediate international conflicts that could arise between the larger powers. This did occur, but not on a regular basis. In general, Ottawa’s ability to mediate conflict was compromised by its close ties to Washington, which at the very least generated distrust in its ability to mediate in an impartial manner.

The history of Canada’s involvement in the Vietnam War suggests that there was a root for such distrust. Whereas Ottawa postured as an impartial peacekeeper during the war, it in fact exclusively aided South Vietnam; contributed to espionage operations for the CIA; and facilitated the sale of weapons to the US.

Given Ottawa’s competing international allegiances during the Cold War — to the US on the one hand, and the international community on the other — many historians now view the concept of middle power as an oversimplification of Canada’s postwar stature. Adam Chapnik, for example, has argued that the “middle power idea was… rather vague, complicated, and insufficiently thought out. The expectations attached to Canada’s new status were unrealistic.”

In spite of this, it is clear that Canada set many important precedents in the postwar international order. It was one of the first non-great powers to be involved in the construction of the United Nations, and its diplomatic corps were earnestly committed to the objective of peacekeeping and international co-operation.