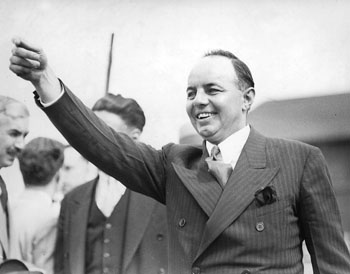 The Honourable Mitchell Frederick Hepburn, premier of Ontario 1934\u201342 (courtesy Archives of Ontario).\r\n 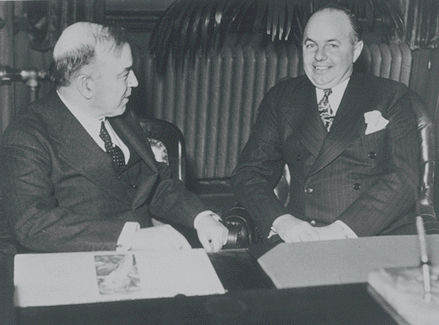 Mitchell Frederick Hepburn, politician, premier of Ontario 1934–42 (b at St Thomas, Ont 12 Aug 1896; d there 5 Jan 1953). Confident and affable, "Mitch" was a popular farmer who won a narrow victory in Elgin West in the 1926 federal election and was re-elected with a healthy majority in 1930. That year he was elected leader of the provincial Liberal Party and broadened its base by allying with the Progressives, conciliating the liberal and labour left, and trying to resolve the split over the Roman Catholic school question and prohibition. His speeches on behalf of Ontario farmers and for freer trade were noted more for their wit than for economic insight.

Aided by the Depression, the ineptness of Conservative Premier George HENRY, and funding from business and mining interests, Hepburn won an overwhelming victory in the 1934 provincial election. In office, Hepburn implemented a number of populist measures - the auction of government limousines and the closing of the lieutenant-governor's residence. He cancelled power contracts with 4 Québec companies, tried to bring order to provincial finances, improved labour legislation and aided the iron-ore industry. He regarded the compulsory pasteurization of milk as his greatest accomplishment. Less successful was his attempt to aid parochial schools.

The most celebrated event of his first administration was the strike at General Motors in Oshawa in 1937 (seeOSHAWA STRIKE). Hepburn, while sympathetic to the unemployed, was opposed to unionization and to letting the Committee for Industrial Organization (later the Congress of Industrial Organizations) into Canada. He supported GM in its refusal to negotiate with the CIO organizers, and when Ottawa refused to dispatch a unit of the RCMP, he organized his own volunteers - Hepburn's Hussars. Ultimately, the strike was settled with what amounted to an acceptance of the union. The strike ruptured Hepburn's relationship with Prime Minister KING (which had never been close), and in January 1940 he passed a resolution in the Ontario legislature critical of King's war effort. King thereupon called an election, which he won handily.

Mitch Hepburn's day was over; he helped to scuttle the 1941 federal-provincial conference and supported A. MEIGHEN in the South York by-election of 1942, but his struggle with King ruined his party and destroyed his health. In 1942 he resigned as premier and in 1943 as provincial treasurer. The Liberals asked him to lead the party in the 1945 election, but the party was routed and Hepburn lost his seat.