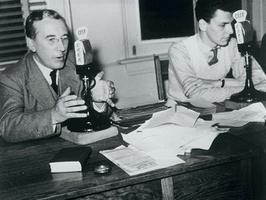 Speaking into a microphone from Regina on the night the CCF was elected as the government of Saskatchewan (courtesy Saskatchewan Archives Board/Michael West).

Major James William Coldwell, "M.J.," teacher, politician (b at Seaton, Eng 2 Dec 1888; d at Ottawa 25 Aug 1974). One of the founders of the CO-OPERATIVE COMMONWEALTH FEDERATION, he succeeded J.S. WOODSWORTH as national CCF leader, 1942-60. Coldwell came to Canada as a teacher in 1910; he stayed briefly in Alberta and then moved to Regina. He first achieved national prominence as a leader in teachers' organizations, 1924-34. Also a popular alderman in Regina, he developed strong links with socialist labour and farm organizations. When the Great Depression came, he was a natural choice for leader of the new Saskatchewan Farmer-Labour Party in 1932 (which became a part of the CCF) and fought a strenuous campaign in the Saskatchewan general election of 1934, attracting enormous crowds; but the party sent only 5 members to the legislature against 47 Liberals. Himself defeated, Coldwell moved to the national scene.

As MP for Rosetown-Biggar (Sask) 1935-58, he was a polished performer in the House of Commons from the first. He disagreed with Woodsworth (who was a pacifist) on the war in 1939, and Coldwell and the majority of the CCF supported Canada's participation in WWII. His support of collective security was reinforced and he was a member of the Canadian delegation to the founding of the United Nations in 1945. He presided over both the peak of CCF support in the mid-1940s and its slow decline throughout the 1950s, leading the party in 5 general elections. His views seemed to moderate as more of the CCF's social welfare program was implemented by other governments, but he remained convinced of the need for a democratic socialist party. He was named to the Privy Council of Canada in 1964 and made Companion of the Order of Canada in 1967.