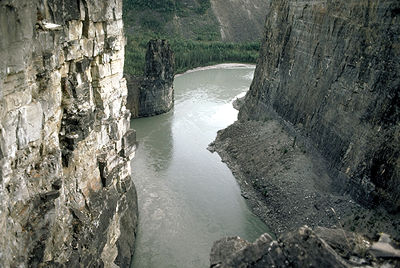 Nahanni National Park Reserve (est 1976, 4765.2 km2) is a wilderness of rugged mountains, wild rivers and luxurious hot springs stretched along the South Nahanni River in the southwest corner of the Northwest Territories. The park was recognized as a United Nations World Heritage Site in 1978.

Tales of lost gold mines and hidden tropical valleys lured prospectors in the early 1900s. Many disappeared without trace in the harsh land, and when 2 headless corpses were discovered, stories of fierce mountain men spread. No one found gold or tropical valleys, but prospectors did discover a land of incomparable beauty. The uniqueness of the area led the federal government to set aside part of it to be included in the national park system in 1972. Four years later Nahanni was formally established as a national park, but it has reserve status until the settlement of native land claims in the area.

The vegetation is characterized by boreal and alpine species. Frequent, extensive fires have marked much of the forest. The park's 32 mammal species include Dall sheep, moose, woodland caribou and grizzly bear. Peregrine falcons, trumpeter swans and golden eagles are among the 120 species of birds recorded.

The adventures experienced by the gold seekers can be recaptured by visitors in canoeing, hiking or wilderness camping. The South Nahanni River is considered to be one of the best canoe-tripping rivers in the world. There is no road access to the park. Essential services and facilities are available at Fort Simpson, NWT.