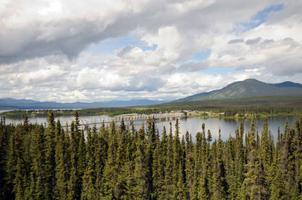 Nass River is 380 km long, rises in the northern interior of BC and flows generally southwest, draining approximately 20 700 km2, to reach the Pacific at Portland Inlet. Its major tributaries are the Bell-Irving, Meziadin and Cranberry rivers. The name comes from a Tlingit word meaning "food depot," referring to the biological productiveness of the river. Its annual eulachon run in particular attracted aboriginal peoples from afar who traded with the resident Nishga, today still the main inhabitants of the Nass Valley. While the lower valley is an important timber-production area, and many traditional resource-harvesting practices have altered as a result, the Nishga still adhere closely to a complex system of land ownership and title throughout the entire area (see Land Claims). There are 4 villages, all Nishga, along the river - New Aiyansh, Canyon City, Greenville and Kincolith. Recent lava flows are a feature of the valley near New Aiyansh and play an important role in Nishga history. According to Nishga sources, some 2000 people were killed by volcanic flows in the late 1700s.