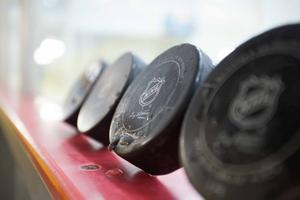 The National Hockey League (NHL) was established in Montréal, Québec, on 26 November 1917. The league succeeded the National Hockey Association (NHA), which had folded due to a dispute between Eddie Livingstone, the owner of the Toronto Blueshirts, and the owners of the other teams in the league (see The Birth of the National Hockey League). The original NHL teams were the Montreal Canadiens, Montreal Wanderers, Ottawa Senators and Toronto Arenas (forerunner of the Toronto Maple Leafs); Québec City held a franchise, but decided not to operate that season. At the time, the NHL was one of the professional leagues (e.g., the Pacific Coast Hockey Association) that competed for the Stanley Cup.

In the next 25 years, the league underwent numerous changes in composition, scheduling and playoff format. In 1924, the Boston Bruins became the first American club to join; and by 1926, six of the 10 teams were from the United States. The Ottawa Senators dominated the 1920s, with six league titles and four Stanley Cup victories; however, the team folded in 1934.

Some early exploits live on in hockey history: Joe Malone scored seven goals in one game in 1920; George Hainsworth won the Vézina Trophy in its first three years; and in February 1923, Foster Hewitt broadcast a game on the radio for the first time. Outstanding players of the era included Frank “King” Clancy, Charlie Conacher, Bill Cook, Aurèle Joliat, Lester Patrick and Nels Stewart. Howie Morenz was the flashiest player, and Eddie Shore the premier defenceman.

In 1942, there were six teams left in the NHL: the Montreal Canadiens, Toronto Maple Leafs, Boston Bruins, Chicago Black Hawks, Detroit Red Wings and New York Rangers. The league remained unchanged in this arrangement for 25 years. When six expansion teams were added to the league in 1967, the existing franchises became known as the “Original Six.”

The Toronto Maple Leafs, led by Walter “Turk” Broda, Syl Apps, Ted Kennedy and Max Bentley, were the dominant team of the 1940s, winning the Stanley Cup six times in 10 years. However, Maurice “Rocket” Richard of the Canadiens was clearly the outstanding offensive player, scoring 50 goals in 50 games in the 1944–45 season, including five goals and three assists in one game. In 1948, the colour barrier was broken when Larry Kwong played for the New York Rangers. Ten years later, in 1958, Willie O’Ree would become the first Black player in the league, when he took to the ice for the Boston Bruins.

The outstanding team of the early 1950s was the Detroit Red Wings, led by Gordie Howe (who won the scoring championship five times and the Hart Trophy four times in the decade), Red Kelly, Ted Lindsay and Terry Sawchuk. In the mid-1950s, the Montreal Canadiens built possibly the most powerful team in NHL history, with Maurice and Henri Richard, Bernie Geoffrion, Jean Béliveau, Jacques Plante, Dickie Moore, Doug Harvey and others. The Canadiens won the Stanley Cup six times, including a record five straight (1955–56 to 1959–60).

In 1967, six new US-based teams were added to the NHL: California (later Oakland) Seals, Los Angeles Kings, Minnesota North Stars, Philadelphia Flyers, Pittsburgh Penguins and St Louis Blues. The Buffalo Sabres and the Vancouver Canucks joined in 1970, and the Atlanta Flames and New York Islanders in 1972. In 1974, with the addition of the Kansas City Scouts and Washington Capitals, the number of teams had reached 18, of which only three were based in Canada. Montreal remained the dominant team, winning eight championships between 1967 and 1979.

In 1979, the NHL expanded again when it merged with the World Hockey Association (WHA). The WHA had been founded in 1971, breaking the NHL’s monopoly on professional hockey. In its first season, there were many players in the league with NHL experience, including such stars as Bobby Hull, Bernie Parent, John McKenzie and Brian Conacher. Hockey legend Gordie Howe would join his sons, Marty and Mark, in Houston the following season. The WHA began with 12 teams and grew to 14 before rising expenses and dwindling crowds reduced it to seven in 1978–79. In 1979, the WHA folded. The Winnipeg Jets, Edmonton Oilers, Québec Nordiques and Hartford Whalers were assimilated by the NHL.

In 1980, the Atlanta franchise moved to Calgary (see Calgary Flames), bringing the number of NHL teams in Canada to seven. In 1983–84, Edmonton became the first of the ex-WHA teams to win the Stanley Cup, ending a four-year reign by the New York Islanders. The high-scoring Oilers (with such stars as Mark Messier and Wayne Gretzky) captured the cup in four of the next six seasons. In the early 1990s, Mario Lemieux’s Pittsburgh Penguins became the dominant team, taking back-to-back Stanley Cups in 1990–91 and 1991–92, and winning a record-setting 17 games in a row in 1992–93 — a record that still stands today.

The sport increasingly emphasized scoring and offensive play. In the 1970s, Phil Esposito of the Boston Bruins set new records for goals (76) and points (152) in a season (1970–71), while defenceman Bobby Orr revolutionized his position, becoming the first defenceman to win the scoring championship (Orr won the Art Ross Trophy in 1970 and 1975). The offensive emphasis of the sport was typified in the 1980s by the incredible scoring feats of Mario Lemieux and of Wayne Gretzky, whose accomplishments are perhaps unmatched in any sport. Gretzky is the all-time leading scorer in the NHL with 2,857 points, and the only player to reach 2,000 career points; he holds or shares 61 NHL records, including most goals (894) and most assists (1963).

Expansion and Change in the NHL Since 1990

Further expansion in 1991 and 1992 increased the league to 26 teams, including another Canadian franchise, the Ottawa Senators. Franchises were also awarded to Tampa Bay (Lightning), Anaheim (Mighty Ducks), Miami (Florida Panthers) and San Jose (Sharks). The Quebec Nordiques, suffering financially from playing in the league’s smallest market, were sold in 1995 and relocated to Denver, where they became the Avalanche. The Winnipeg Jets were also relocated in 1996, after being sold to a group in Phoenix and renamed the Phoenix Coyotes (Arizona Coyotes since 2014); this left six franchises operating in Canada.

In the summer of 1997, the league announced that it would expand to four more American cities. By the year 2000, with the addition of the Nashville Predators (1998), Atlanta Thrashers (1999), Minnesota Wild and Columbus Blue Jackets (2000), the NHL had expanded to 30 teams. In 2011, the Atlanta Thrashers relocated to Winnipeg, and the Jets name was reinstated. In 2016, NHL commissioner Gary Bettman announced that a new franchise in Las Vegas, the Golden Knights, would join the league for the 2017–18 season, bringing the total number of clubs to 31.

The NHL Market in Canada

By 2000, Canadian teams were increasingly pressured to compete financially with American markets, and Toronto was the only Canadian team that consistently played to sell-out crowds. The NHL’s Canadian Assistance Program offered aid only when teams could demonstrate their viability, and for most teams in Canada, viability was threatened by declining attendance. In 1999, Rod Bryden, owner of the Ottawa Senators, announced that unless the federal government was willing to offer financial support, the Senators would be the next Canadian team sold to the US. In January 2000, the federal government announced that it would consider offering annual aid to Canadian NHL hockey teams until 2004. However, widespread criticism of the proposal was so severe that it brought about an immediate retraction. The Senators remained in Ottawa, and since 2005 attendance has remained steady for most Canadian franchises.

Overall, Canadian franchises have proven to be more financially viable than a number of American teams. In 2012, the Toronto Maple Leafs was the most profitable franchise in the NHL at $81.9 million. Believing that Canada could support another NHL franchise, ambitious Canadian businessman Jim Balsillie, founder of the wireless technological firm Research In Motion, did his best to bring another franchise north of the border. Balsillie made several bids to move American teams to Hamilton (in southern Ontario), trying to purchase Pittsburgh in 2006 and Nashville in 2007. In 2009, Balsillie tried once more to bring the Phoenix Coyotes to Hamilton, but the NHL and Arizona bankruptcy judge Redfield T. Baum rejected the bid.

Southern Ontario was not the only region in Canada that tried to acquire an NHL franchise. In 2009, True North Sports and Entertainment (TNSE) made a serious pitch for the Phoenix Coyotes (the same franchise that moved from Winnipeg in 1996), but a last-minute settlement was reached between the NHL and the City of Glendale to keep the Coyotes in Arizona. However, the Atlanta Thrashers were also experiencing problems, and TNSE finalized a deal to move the Thrashers to Winnipeg on 31 May 2011. The team was renamed the Jets, the same name Winnipeg’s hockey team had during their glory years in the World Hockey Association from 1972 to 1979 and in the NHL from 1979 to 1996. The return of NHL hockey to Winnipeg was extremely popular with Winnipeggers. According to the Winnipeg Free Press, 5,800 season tickets sold out in 17 minutes.

Labour Disputes in the NHL

In 2004, team owners enforced a lockout banning members of the NHL Players’ Association (hockey players) from play. The lockout, a result of the players’ resistance to a salary cap, lasted 310 days, from 16 September 2004 to 13 July 2005. The result was a salary cap of $39 million (US) per team for the 2005–06 season and a significant reduction in players’ salaries. It was the first time a major North American sports league had lost an entire season due to a labour dispute. It also resulted in cancellation of the Stanley Cup playoffs; for the second time in its history, the cup was not awarded (the first was in 1919 due to the influenza epidemic).

When the 2005 collective bargaining agreement expired in 2012, teams and players once again found themselves arguing about money. The major issue this time was the percentage of hockey-related revenues the players would receive in a season. According to the existing contract, players received 57 per cent of all hockey-related revenues, but the NHL wanted the percentage dropped significantly. Neither the players nor the NHL would budge, and the resulting lockout cancelled 510 regular season games (34 games per team), the NHL All-Star Game, and the 2013 Winter Classic between the Detroit Red Wings and the Toronto Maple Leafs. An agreement was finally reached on 12 January 2013, with players and owners sharing hockey-related revenues 50–50, among other terms.

Canadians in the NHL

The spread of hockey and growing proficiency of players in Sweden, Finland, the Czech Republic, Slovakia and the United States is reflected in the increasing number of players from these countries in the NHL, including many of the Russian, Swedish, Finnish, and Czech stars who emerged in the 1990s. In recent years, the number of NHL players recruited from Canadian junior hockey has dropped significantly. As of 2015, Canadians account for approximately half of the league’s players, a decrease of around 25 per cent from 1990. As in the past, Canadians continue to play crucial roles on and off the ice; for example, Jonathan Toews led the Chicago Blackhawks to victory in 2010, 2013 and 2015, while Sidney Crosby hoisted the Cup in 2009 and 2016 as captain of the Pittsburgh Penguins.

The Birth of the National Hockey League (NHL)