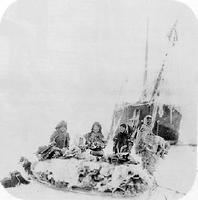 Netsilingmiut are one of several groups of Inuit who live on the Arctic coast of Canada west of Hudson Bay. When visited by the Greenlandic explorer Knud Rasmussen in 1923, the 259 Netsilingmiut were scattered throughout a territory of about 103 600 km2 between Committee Bay, Victoria Strait and Somerset Island. Their name means "people of the place where there is seal" and probably derives from the name of a lake, Netsilik (Seal), on Boothia Peninsula.

Until the latter half of the 20th century, the Netsilingmiut were nomadic hunters who lived in small shifting family groups with simple nonhierarchical social organization. They had no formal government and no institutionalized group relationships. They hunted seal, caribou, muskoxen and occasionally polar bear, and fished for salmon, trout and char. By ingenious technology, they converted the bones, skins and flesh of these animals, as well as stone, snow and ice, into all the necessary survival materials.

The Netsilingmiut speak a dialect of Inuktitut, the language spoken by Inuit from northern Alaska to eastern Greenland. They had a detailed knowledge of an enormous expanse of territory, and sometimes spent several years on journeys to the coast of Hudson Bay and to the Thelon River, where they obtained knives, needles, wood for sledges, kayaks, and, early in the 20th century, firearms.

European explorers first entered Netsilik territory early in the 19th century, some in search of a Northwest Passage from the Atlantic to the Pacific; others in search of the remains of the Franklin Expedition. Explorers were a second source of goods from the outside world. A third source appeared in 1923, when the first Hudson's Bay Co post was established on King William Island. The HBC was followed in the 1930s by missionaries, then by the RCMP, and in the 1950s the process of change accelerated with the establishment of schools and nursing stations.

Today, most Netsilingmiut live in or near the modern government-built settlements of Taloyoak, Kitikmeot Region and Kugaaruk (formerly Pelly Bay) on Boothia Peninsula, Taloyoak (formerly Spence Bay), Qikiqtaaluk Region on Baffin Island, and Gjoa Haven on King William Island. Inuit ways of living are thoroughly mixed in these communities, and socioeconomic homogeneity has given way to diversity regarding the languages spoken, education and work skills, income sources, and travel experience, both within and outside the Arctic. Values and social practices of all sorts are in flux. Community identity is beginning to replace the Netsilik group identity and people are experimenting actively with new ways of being Inuit. The National Film Board with Asen Balikci produced a series of nine films on this group, The Netsilik Eskimo, in 1967.