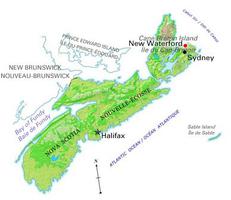 Formerly known as Barrachois (from barachois, meaning small port, lagoon or pond), its present name is likely derived from the Irish seaport and shire town of Waterford, from which many early settlers came. Coal mining in the vicinity began as early as 1854 at Lingan and later at Low Point in 1865. The giant Dominion Coal Company (later Dominion Steel and Coal Company) commenced operation at Barrachois in 1907; several other large mines opened before World War I. Over the years a total of 11 mines were in production. This expansion drew a largely Catholic but ethnically mixed society (Irish, Scottish, English and Eastern Europeans) to the many company houses of this single-enterprise community. Coal mining has long been known as a dangerous occupation, and one particular incident in New Waterford demonstrated this fact. At 7 a.m. on 25 July 1917 there were 270 men starting work in the No. 12 colliery. Thirty minutes later, a loud explosion was heard at the sixth, seventh and eighth levels of the pit. Sixty-five men and boys, ranging in age from 14 to 65, were killed. These casualties were added to a lengthy list of mine incidents totalling in the hundreds. (See also Disasters.)

The miners faced many additional hardships, including the great Cape Breton strikes of the 1920s and the initial round of mine closures during the 1960s and 1970s. The December 1999 closure of the Phalen Mine after 13 years of production and the termination of federal funding to the Cape Breton Development Corporation (DEVCO) have almost eliminated coal-mining activities. A regional industry that at its peak employed over 12 000 men now offers work for just several hundred miners at the Island's last remaining operation - the Prince Colliery. The long-term future of a privatized Prince mine remains uncertain.

Recent efforts to diversify the economy in the technology and service sectors show promise as industrial Cape Breton moves away from its reliance on coal and steel production.