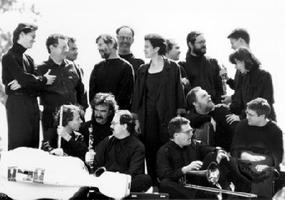 Nouvel Ensemble Moderne, founded in 1989 by conductor and artistic director Lorraine Vaillancourt, is a chamber orchestra dedicated to performing works of the 20th and 21st centuries. It is currently the ensemble-in-residence at UNIVERSITÉ DE MONTRÉAL's Faculty of Music. Comprising 15 musicians, NEM has often been praised for its impeccable ensemble playing, balance, and rhythmic precision. Since its inception the Nouvel Ensemble Moderne has toured Canada, the US, France, Belgium, Germany, the Netherlands, Spain, Italy, England, Japan, Australia, Singapore, and Mexico. To date, the ensemble has produced 14 albums under the labels UMMUS (Montréal), New World Records (New York), Composers Recording Inc (New York), and Montaigne-AUVIDIS1 (Paris). NEM has over 300 contemporary works in its repertoire, and has given world premieres of more than 60 compositions.

NEM has performed in several major international festivals, symposiums and concert halls, including the Scotia Festival of Music (1991), the New Music Symposium at Domaine Forget (since 1994), June in Buffalo (1995), New York City's Bang-on-a-Can Festival, the Festival Musica 97 in Strasbourg, Fondation Royaumont (1997, 2000, 2003, 2004), the International New Composers Biennale (presented in various countries worldwide), the Adelaide Festival of Arts, the Festival international de Lanaudière, and the Los Angeles County Museum of Art, where it inaugurated in 1998 that institution's 60th concert season.

In 1991 the NEM founded the International Forum of Young Composers, a four-week workshop held biennially at the Université de Montréal for young composers consisting of seminars, rehearsals, panel discussions, and concerts. In 2002 NEM launched MusMix, a biennial event featuring instrumental and electroacoustic music.