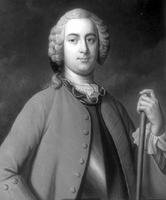 Confirmed as British by the Treaty of Utrecht in 1713, the peninsula of Nova Scotia was neglected until 1749 - a period of "phantom rule" and "counterfeit suzerainty." Since the only English inhabitants were the garrison and a few merchants at Annapolis, and fishermen and a handful of troops at Canso, the elective assembly prescribed by the governors' commissions was impracticable. The main body of inhabitants, the Acadians, had been given a year to take an unqualified oath of allegiance, but although they persistently refused, they were not forced to leave; instead they flourished, increasing from nearly 2000 in 1710 to more than 12 000 by 1750.

Determined to remove the danger posed by the presence of the French at Louisbourg on Ile Royale (Cape Breton Island), Gov William Shirley of Massachusetts and New England troops, with a British naval force, captured the fortress in 1745. Much to their chagrin, it was returned to the French by the Treaty of Aix-la-Chapelle in 1748. The British government decided, however, to establish a counterpoise to Louisbourg, and in June 1749 Edward Cornwallis with some 2500 settlers founded Halifax and made it the provincial capital. Over the next few years a considerable number of "foreign Protestants," largely German, also arrived, many of whom founded Lunenburg in 1753.

On the eve of the Seven Years' War Gov Charles Lawrence sought to remove the danger presented by the French at Fort Beauséjour and by the French missionary, Abbé Jean-Louis Le Loutre, who was promoting anti-British sentiment among Acadians and Mi'kmaq. Beauséjour fell to Lawrence's forces in June 1755, and within the next few months, after the Acadians had rejected a final ultimatum to take the oath, he deported 6000 on his own initiative. After the war some 2000 Acadians returned and resettled in the province, many in the new township of Clare. Cape Breton and Prince Edward Island were annexed to Nova Scotia after the war, but the latter was separated permanently in 1769 and the former temporarily 1784-1820.

Because New Englanders in Halifax kept insisting on the "rights of Englishmen," Lawrence, on instructions from Britain, reluctantly summoned an elective assembly which met in Halifax on 2 October 1758, the first in what is now Canada. To fill the lands formerly occupied by the Acadians, he also issued proclamations inviting settlers. Between 1760 and 1763 alone no fewer than 4500 New Englanders entered the province. About the same time 500 Ulstermen arrived, mostly under the auspices of the adventurer Col Alexander McNutt; they were followed in 1772 and 1773 by some 1000 Yorkshiremen who settled on the Isthmus of Chignecto and in 1773 by nearly 200 Scots who settled at Pictou (see Hector). But it was the New Englanders who laid the enduring foundations of Nova Scotia, making it, in a very real sense, a "new New England." A population of about 8000 in 1763 increased to more than 17 000 in 1775, well over half of them New Englanders.

Yet the New Englanders were unable to establish some of their customary modes of self-government. Instead of town meetings they were forced to accept the undemocratic English system of local government by courts of sessions and grand juries. These institutions remained until 1879 because the province was under the rule of a Halifax merchant-official oligarchy, which dominated the Council of Twelve and manipulated the Assembly to serve its own interests. For a dozen years prior to 1775 this group under the leadership of Joshua Mauger, latterly a British MP, plundered the province, secured the recall of 3 governors and defeated the well-intentioned, but inept, attempts of Gov Francis Legge to disclose their abuses.

During the American Revolution many of the province's New Englanders undoubtedly sympathized with the Americans; certainly they were as willing to trade with Massachusetts as with the British forces. But outside strongly British Halifax, Nova Scotians showed no desire to become involved, and John Bartlet Brebner's description of them as the "neutral Yankees of Nova Scotia" is exceedingly apt. If nothing else, their existence at scattered intervals along the edges of a narrow peninsula separated by rough terrain prevented concerted, united action on their part. Except for the short-lived, ineffectual "Eddy rebellion" at Fort Cumberland, Nova Scotia remained quiet. By 1782 Loyalists began to arrive, the first of a large influx, which affected the province markedly and led in 1784 to the creation of New Brunswick and Cape Breton as separate provinces.