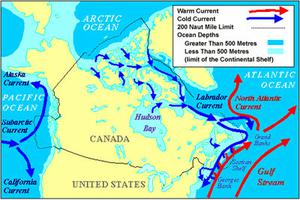 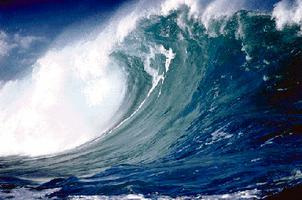 The world ocean and its marginal seas cover about 71% of the Earth's surface. Its division into individual oceans and seas is largely arbitrary and has varied through the years. Historically, people referred to 5 oceans: Atlantic, Pacific, Indian, Arctic and Antarctic (or Southern). Modern convention speaks of only the first 3: the Arctic is considered a marginal sea of the Atlantic; the Southern, the southern continuation of the Atlantic, Indian and Pacific oceans. Thus, Canada can be seen to be surrounded by 2 (Atlantic, Pacific) or 3 (Atlantic, Pacific, Arctic) oceans, depending on the scheme of division used.

The interplay of these ocean waters with freshwater runoff from land creates the conditions that support large biological production on Canada's continental shelves and embayments (see COASTAL LANDFORM; DRAINAGE BASIN). The COASTAL WATERS also affect shipping, offshore resource industries and maritime climate. OCEANOGRAPHY is the science that studies the physical, chemical, geological and biological properties of the oceans and analyzes the impacts resulting from the exploitation of their resources.

The average oceanic depth is nearly 4000 m; that of the marginal seas 1200 m. The continents generally extend under the ocean, forming continental shelves tens to hundreds of kilometres wide and up to 500 m deep. At their outer edge, the water depth increases rapidly to the ocean basin depths of 3000-6000 m. This region is called the continental slope.

The oceans are divided into several deep basins by mid-ocean ridges, where new oceanic crust is formed (seePLATE TECTONICS). Rising to depths of 2000 m or shallower and sometimes forming ISLANDS (eg, Iceland, the Azores), these ridges constrain the distribution of the deep waters and affect the upper-ocean circulation. Sea-floor spreading also creates transverse ridges perpendicular to the mid-ocean ridges (eg, the shallow ridges joining Greenland to Iceland and Scotland). These also separate ocean basins.

Island arcs and deep-sea trenches are formed where oceanic crust is moving under another tectonic plate. The deepest oceanic depths are found in such trenches, the greatest being over 11 000 m in the Mariana Trench, western North Pacific. Island arcs (eg, Antilles, Aleutians) frequently form the boundaries between marginal seas and the adjacent ocean. The deep basins also contain isolated sea-mounts rising several thousand metres from the sea-floor and often forming elongated chains. Some of these volcanic structures rise above the surface and form islands (eg, Hawaiian Islands).

In the ocean, water characteristics change with depth: the least dense water is at the surface; the most dense at the bottom. In tropical and temperate latitudes, density is largely controlled by temperature; temperature generally decreases with depth. In polar and subpolar regions, salinity plays a more important role; here cold, low-salinity surface layers overlie warmer, saltier deep layers.

In the upper few tens of metres of the ocean, the euphotic zone, one-celled planktonic organisms use sunlight to convert various nutrients (eg, inorganic carbon, nitrates, phosphates) into organic molecules through photosynthesis. By this means they multiply to form a food source for larger organisms, thus forming the basis for marine food chains and webs.

The upper ocean usually consists of a "mixed layer" some tens of metres thick, which is homogenized through wind and wave action. At the bottom of the mixed layer the density of the water increases markedly; this region is called the seasonal pycnocline. It changes in depth and temperature from season to season.

During spring and summer in temperate latitudes, shallow mixed layers are formed because solar radiation absorbed in the surface layers makes them warmer and less dense. Biological productivity within the mixed layer depletes the nutrients and the seasonal pycnocline inhibits the transfer of nutrients from below; hence, after an initial spring bloom, biological productivity is limited by the rate at which nutrients can be regenerated from the recycling of the organic products of dead organisms.

In fall and winter, stronger winds and waves as well as convection caused by cooling at the surface cause the mixed layer to become denser and deeper, incorporating deeper nutrient-rich waters into the surface waters in preparation for the following spring. In subpolar regions, mixed layers deeper than 2000 m can form in late winter.

Any mechanism that causes mixing of ocean waters to increase nutrients in the euphotic zone contributes to an increase in biological productivity. Frontal mixing between lower salinity inshore waters and warmer offshore waters results in the injection of heat, salt and nutrients into the coastal waters. On Canada's East Coast the boundary or front between inshore and offshore waters generally lies beyond the edge of the Continental Shelf, making this an especially rich area for fishing (seeGRAND BANKS).

Other factors that can promote horizontal and vertical mixing include wind action and eddies spinning off major currents. Mixing between surface and bottom waters occurs more readily if the water is relatively shallow (up to 200 m). Hence, the continental shelves are more productive than open-ocean areas.

Below the seasonal pycnocline is found the main thermocline, where, from depths of 200 to 4000 m, the water temperature falls from as high as 18°C to 2.5°C. The main thermocline arises because water from the progressively colder, denser, winter-mixed layers of higher latitudes flows equatorward below the warmer, less dense layers. The deepest waters of the main thermocline are formed by winter convection in a few high-latitude locations, then spread to fill the deep basins of the world oceans. These deep waters are remarkably uniform in temperature and salinity. For example, fully 10% of the total volume of the ocean has temperatures of 0.6ºC to 1.6°C and salinities of 34.67 to 34.72.