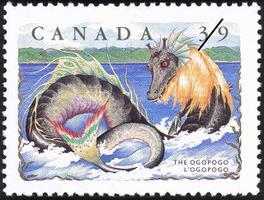 Ogopogo is a fabled aquatic monster which is said to inhabit Okanagan Lake. The Salish called it "snake in the lake"; the Chinook called it "wicked one" and "great beast in the lake." Representation appeared in precontact petroglyphs. Like "Nessie," the Orm of Loch Ness, Ogopogo is variously described as having the head of a sheep or a horse and a long serpentine neck, and is reported to swim with an undulating motion; it is generally "sighted" as several humps moving rapidly through the water. The name "Ogopogo" is a palindrome from a comic English music-hall song, "Ogopogo Song." Okanagan Lake has temperamental weather conditions, which might explain the apparition, and an ill-defined lake bottom, which gives rise to speculation about long-trapped dinosaur eggs released by movements of the Earth's crust.

In this episode of The Secret Life of Canada, Leah and Falen explore the truth behind two very old stories. Sasquatch and Ogopogo are legendary creatures of land and sea — but how exactly did they go from sacred figures in Indigenous oral histories to terrifying beasts and dopey-looking mascots?