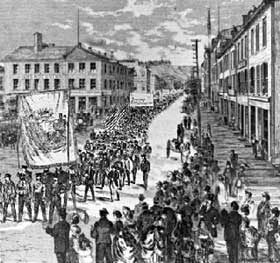 Labour Day has its roots in an 1872 printers’ strike in Toronto. Fighting for a nine-hour work day, the strikers’ victory was a major milestone in the changing relations between Canadian workers and their government.

In a time when the news of labour "strife" is dominated by disputes between millionaire athletes and billionaire owners, history provides a useful perspective on a period when working people had to fight to work less than 12 hours a day. The "Nine Hour Movement" began in Hamilton, Ontario, and then spread to Toronto, where its demands were taken up by the Toronto Typographical Union.

In 1869, the union sent a petition to its members' employers requesting a weekly reduction in hours per week to 58, placing itself among the leading advocates in the industrialized world for a shorter work week. Their request was refused outright by the owners of the printing shops, most vehemently by George Brown of The Globe.

By 1872, the union's stand had hardened from a request to a demand, to a threat to strike. The employers called the demand for a shorter work week "foolish," "absurd," and "unreasonable." As a result, on 25 March 1872 the printers went on strike.

On 15 April, a demonstration was held to show solidarity among the workers of Toronto. A parade of some 2,000 workers marched through the city, headed by marching bands. By the time the parade reached Queen's Park, the sympathetic crowd had grown to 10,000.

The employers fought the strikers by bringing in replacement workers from small towns. George Brown launched a counterattack by launching a legal action against the union for "conspiracy." Brown's action revealed the astonishing fact that according to the laws of Canada, union activity was indeed considered a criminal offense. Under the law, which dated back to 1792, police arrested and jailed the 24 members of the strike committee.

Brown, however, overplayed his hand. Prime Minister John A. Macdonald had been watching the Nine Hour Movement “with curious interest, his big nose sensitively keen," wrote historian Donald Creighton, "like an animal's for any scent of profit or danger." The scent of profit came from the fact that Macdonald's old Liberal rival George Brown had made himself a hated man among the workers of Canada.

Macdonald was quick to capitalize. In Ottawa, he spoke to a crowd at city hall, promising to wipe the "barbarous laws" restricting labour from the books. Macdonald then came to the rescue of the imprisoned men and on 14 June passed the Trade Unions Act, which legalized and protected union activity. Macdonald's move not only embarrassed his rival Brown but also earned him the enduring support of the working class.

Legacy of the Strike

For the strikers themselves, the short-term effects were very damaging. Many lost their jobs and were forced to leave Toronto. The long-term effects, however, were positive. After 1872, almost all union demands included the nine-hour day and the 54-hour week. Thus the Toronto printers were pioneers of the shorter work week in North America. Meanwhile, campaigns for an eight-hour day were already gaining in popularity, and would eventually take hold, in the United States.

The fight of the Toronto printers had a second, lasting legacy. The parades held in support of the Nine Hour Movement and the printers' strike led to an annual celebration. In 1882, American labour leader Peter J. McGuire witnessed one of these labour festivals in Toronto. Inspired, he returned to New York and organized the first American "labor day" on 5 September of the same year. Throughout the 1880s, pressure built in Canada to declare a national labour holiday and on 23 July 1894, the government of Prime Minister John Thompson passed a law making Labour Day official. A huge Labour Day parade took place in Winnipeg that year. It stretched some five kilometres. The tradition of a Labour Day celebration quickly spread across Canada and the continent. It had all begun in Toronto with the brave stand of the printers' union.