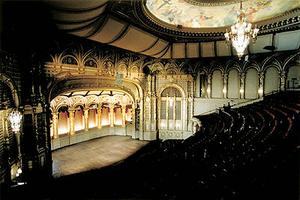 Opened in 1927 as a movie theatre palace and vaudeville house, Vancouver’s Orpheum Theatre was for many years Canada's largest and most opulent theatre. A much-loved concert space and architectural gem, the 2,688-seat venue located at 884 Granville Street was revitalized in the mid-1970s and recognized as a National Historic Site in 1979. Operated by Vancouver Civic Theatres, it remains one of Canada's premier concert halls and presents a wide variety of classical and contemporary performances. It is the permanent home of the Vancouver Symphony Orchestra (VSO) and has been the main venue for the Vancouver Bach Choir, the Vancouver Cantata Singers, the Vancouver Chamber Choir and the Vancouver Recital Society.

The Orpheum was designed by Seattle-based Scottish architect Benjamin Marcus Priteca in "conservative Spanish Renaissance" style and financed by Vancouver businessman Joseph Langer at a cost of $1.25 million. One of 17 similar theatres built throughout Canada and leased to the Chicago-based Orpheum Circuit, it was originally classified as a movie palace based on its 3,000-seat capacity, extravagant decor and full provisions for cinema projection.

It opened as a vaudeville house on 7 November 1927 (its first concert took place the following day), and went on to host performances by Charlie Chaplin, the Marx Brothers, Rudy Vallee and other performers affiliated with the Orpheum Circuit. The theatre’s regular vaudeville programming lasted only four years before the economic constraints of the Great Depression, the collapse of the Orpheum Circuit and its successors, and changing public taste led to its takeover by the Famous Players cinema chain in the early 1930s.

The Orpheum continued to host live shows and concerts occasionally, and remained one of two halls used by the Vancouver Symphony Orchestra between 1930 and 1959. The parade of stars who crossed its stage from the 1930s to the 1970s included Marian Anderson, Arthur Rubinstein, Louis Armstrong and Frank Sinatra. The memorable entertainment they provided, the participation of local talent, and the many attention-grabbing promotions launched by legendary theatre manager Ivan Ackery (1935–69) ensured a vital awareness and appreciation of the Orpheum in the Vancouver community, which strongly rallied to its defence in 1973 when the theatre was threatened with demolition.

By the early 1970s, the Orpheum had fallen into disrepair and redevelopment plans were made by its owner, Famous Players, to convert it into a multiplex. In 1973, a campaign to convert the theatre into a permanent concert hall was spearheaded by the Community Arts Council of Vancouver and the city’s mayor, Art Phillips. With federal, provincial and private support, the city purchased the theatre for $3.9 million in March 1974. After $3.2 million was raised for restoration and renovation, the work began in 1975 under Vancouver architects Thompson, Berwick, Pratt and Partners. The Orpheum reopened on 2 April 1977 as a civic concert hall and the official home of the Vancouver Symphony Orchestra, which performed the inaugural concert with Maureen Forrester under conductor Kazuyoshi Akiyama.

The vaulted oval ceiling, originally devoid of decoration, had been covered with acoustic tiles in 1928 following the introduction of talking pictures. The tiles were removed during the 1970s restoration and a stunning mural was painted in the dome, making it a focal point of the auditorium. Eighty-one-year-old Tony Heinsbergen, the theatre's original decorator, created a classical-based representation of Orpheus and an assembled throng enraptured by his music.

During restoration, the stage was extended into the first two rows of seats (reducing seating by about 100), and the fly system and stage curtains were removed to make way for a permanent orchestra shell. Other adjustments were made by acoustician Theodore J. Schultz (of Bolt, Beranek and Newman Inc., New York) to accommodate the sound of the orchestra, including a system of microphones and speakers (creating some controversy) to distribute the sound evenly throughout the hall. The new acoustics were praised by Gerald Jarvis, then concertmaster of the VSO, for "a European sound, a warm, generous sound quite different from the clinical sound of many North American concert halls" (Toronto Star, 4 April 1977).

The theatre’s mighty Wurlitzer organ, once used to accompany silent films and mounted on a hydraulic lift, was restored by volunteers from the American Theatre Organ Society. It has been used occasionally in recital and with the orchestra, and for a recording by Patrick Wedd (CBC MVCD-1019).

In 1983, a new entrance and foyer was created at 601 Smithe Street, something the original builders had also planned, and in 1995 the theatre underwent an acoustic upgrade. In 2008, the Orpheum Revitalization Project was initiated to restore and refurbish the theatre with new seating, interior signage, and sound and light locks in preparation for the Cultural Olympiad prior to the 2010 Olympic Winter Games, which included performances by Feist, K'Naan, Joel Plaskett and Stars.

In 2006, the City of Vancouver approved the construction of a condominium complex adjacent to the Orpheum on the site of the old Capitol Theatre and Capitol 6 multiplex, on the condition that the construction would also expand the Orpheum’s backstage area. Completed in 2011, the $23 million cultural investment project included an extension of the Orpheum’s stage, a 14,000 square-foot rehearsal room and the 24,000 square-foot space for the VSO School of Music.

The Orpheum displays much of its original splendour despite some loss of detail and some updating for acoustics and patron comfort. Its style is an exuberant and eclectic mix of Romanesque, Moorish, Gothic and Spanish Renaissance elements, making it Canada's best example of the exotic phase of cinema architecture which was the fashion in the larger North American cinemas in the late 1920s. Disparate elements are linked through the effective use of repetition. The overlapping arches that encircle the ceiling, for instance, visually link the oval dome to the curves of the organ screens on either side of the elliptical proscenium arch.

Leading to the auditorium from a fairly narrow main entrance on Granville Street was a series of long corridors, grand staircases and lobbies. This typical layout in movie theatres of the period was intended to minimize the expense of a broad street frontage, while taking advantage of the cheaper real estate for the building's main volume behind. The arrangement also functioned as a theatrical setting for patrons as they moved through the opulent spaces, as if players in an unfolding drama.

The theatre’s elegant and distinctive design has made it a popular location for films and TV series shot in Vancouver. It has been featured in The X Files, The L Word, Battlestar Galactica and The Twilight Saga: Breaking Dawn — Part 1, among many others.

In 1994, the BC Entertainment Hall of Fame incorporated a Starwalk into the Granville Street sidewalk outside the Orpheum Theatre. BC residents who have made outstanding contributions to the entertainment industry are honoured with plaques embedded into the walk of fame. Beginning in 1996, Hall of Fame inductees were also honoured with prominently displayed photos in the Starwall Gallery in the Orpheum lobby.