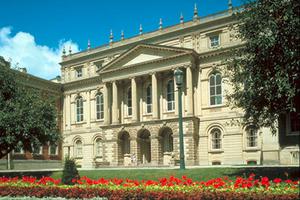 Designed by John Ewart and W.W. Baldwin, it is one of the best examples of Palladian architecture in Canada (Corel Professional Photos).

Osgoode Hall, named after William OSGOODE, was built 1829-32 as the headquarters of the Law Society of Upper Canada. It was later expanded to house law courts and the Osgoode Hall Law School. As originally designed by John Ewart and W.W. Baldwin, Osgoode Hall was a modest 2½ storey brick building. In 1844 and again 1855-57 it was extensively refurbished and enlarged, first by the Toronto architect Henry Bowyer Lane, and then by the local firm of Cumberland and Storm. The 1829 building became the east wing of a larger composition defined by a long central pavilion surmounted by a dome and flanked by 2 projecting wings fronted by a classical portico. Despite this gradual evolution, the building presents a unified appearance, and the design, with its classical porticos set on rusticated arcades, provides one of Canada's most important examples of a late Palladian style.