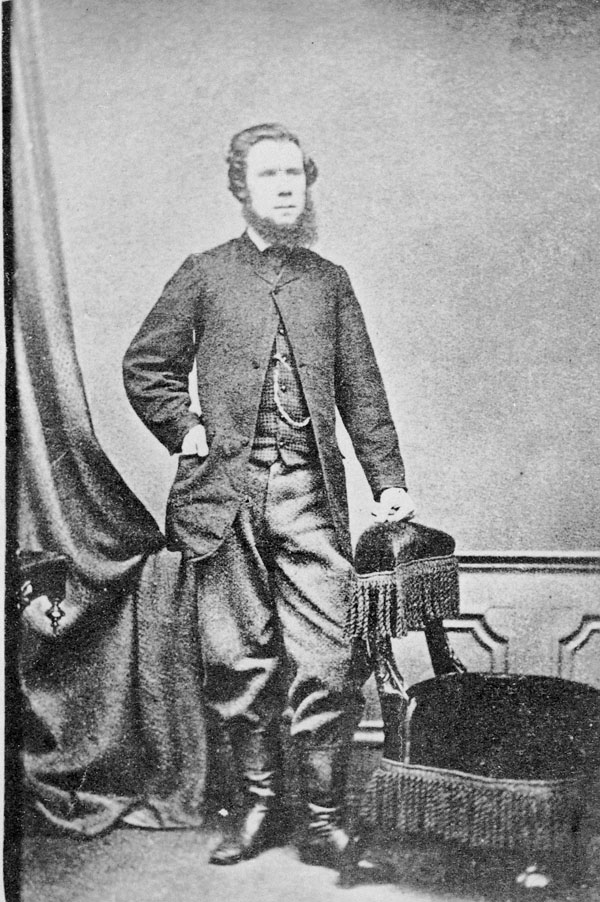 Patrick Whelan was born about 1840 just outside of Dublin, Ireland. When he was 14 years old, Whelan left school to pursue a trade, a common occurrence among Irish youth of the time. He found work as a tailor in Dublin and eventually completed his apprenticeship.

Ireland was still suffering from a blight on the potato crops that, beginning in 1845, had led to wide-spread famine, dislocations and nearly 2 million people leaving the country for Canada and the United States. The decade-long economic and humanitarian crisis that followed led to political upheaval in Ireland. A group of Irish nationalists called the Young Ireland movement sought to use peaceful, democratic means to win back Irish independence, which was lost to Great Britain in 1800. By the time Whelan arrived in Dublin, the group had failed to advance its agenda. Those frustrated by a lack of progress created a more radical group called the Fenian Brotherhood. Named after ancient Irish warriors called the Fianna Eirionn, the Fenians sought independence through revolution.

Whelan moved to England and again found work as a tailor. In 1865, the year of a violent but futile Fenian uprising, Whelan followed many of his countrymen and fled economic hardship and political upheaval for a better life in Canada. He arrived in Québec City and took up his trade there before moving to Montréal. He enjoyed horses, sport shooting, dancing and drinking and contributed to his new city by joining Montréal’s Volunteer Cavalry in early 1866.

Support of the Fenian Cause

Irish political troubles crossed the Atlantic with the Irish immigrants. The American Civil War (1861–65) saw a number of Irish-American regiments fight bravely. With the war’s end, Fenian leaders worked to use their military experience to their advantage. Approximately 10,000 Civil War veterans pledged allegiance to the Fenian cause and supported the idea that they would invade and capture the British North American colonies in exchange for Ireland’s independence. The 1866 Fenian border crossing in New Brunswick was a minor nuisance (see Fenian Raids), but there was a battle in June outside of Ridgeway, near Fort Erie, that resulted in many casualties (see Battle of Ridgeway).

Whelan’s cavalry unit was not involved in the Fenian Raids, but his sympathies were betrayed when he was arrested for trying to persuade a British soldier to join the Fenians. He was released when only the solicited soldier could testify about the conversation. At the time of the Fenian Raids, Whelan was reported to have been in Buffalo, New York, the center of American Fenian activity. He then worked as a tailor in Hamilton before moving to Montréal. It was there that he was married to a woman about 30 years older than himself named Bridget Boyle. He became involved with an Irish nationalist group called the St. Patrick’s Society. In the fall of 1867, he and his wife moved to Ottawa, where he worked for tailor Peter Eagleson, a well-known supporter of the Fenian cause.

Thomas D’Arcy McGee immigrated to Boston at age 17 and was the co-editor of a journal advocating Irish nationalism. Leaders of the Young Ireland movement asked McGee to return to Ireland and write about Irish emancipation, and he was among those who in 1848 tried to spark a revolution to establish an independent Irish republic. The effort’s failure took McGee back to the United States and then, in 1857, to Montréal. Months later, the journalist, poet, author and gifted public speaker was elected to the Canadian legislature. 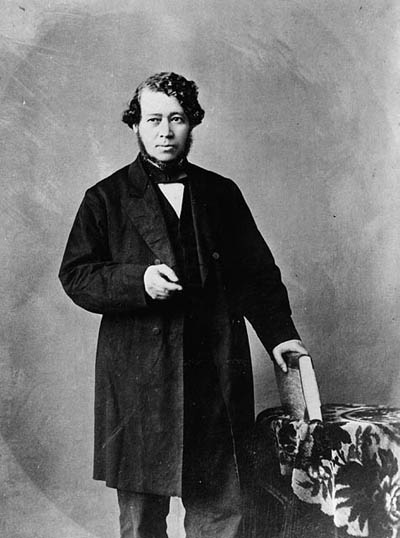 By 1864, McGee was an influential member of the Canadian cabinet and in the conferences in Charlottetown and Québec City, which led to Confederation in 1867. He had also changed his political views and begun to write and speak against Irish nationalism and the Fenian movement. By 1868, his close friend, Prime Minister Sir John A. Macdonald, was considering him a possible successor. However, McGee’s popularity and influence was waning, since many Irish Canadians saw him as a traitor.

On 7 April 1868, McGee’s late-evening House of Commons speech about Canada’s future was met with rousing applause. The House adjourned just after 2:00 a.m., after which McGee walked home. He crossed the Parliament Hill lawn and then the two blocks to his rooming house on Sparks Street. He was reaching for his key when an assassin crept behind him and fired a .32 calibre bullet through the back of his head. He died instantly (see also The Assassination of Thomas D’Arcy McGee). 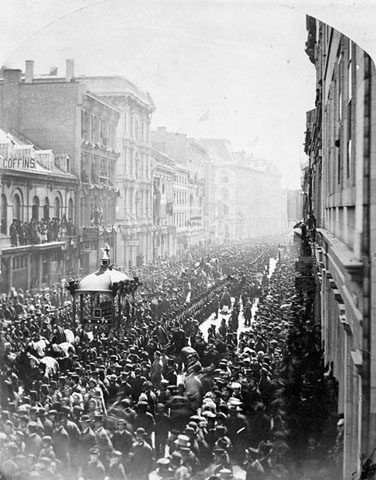 On April 13, 1868 thousands lines the streets to pay their respects to Thomas D'Arcy McGee, one of Canada's Fathers of Confederation. The nation witnessed an outpouring of grief, and in this photo his catafalque makes its way through the streets of Montreal (courtesy Library and Archives Canada/C-89689).

Within an hour, Police Detective Edward O’Neill was on the case, and it was suspected that the murderer was likely a Fenian. The House of Commons doorkeeper told O’Neill to arrest the “sandy whiskered tailor” at Eagleson’s tailor shop. O’Neill knew the Irish community well and understood the man described to be Whelan. 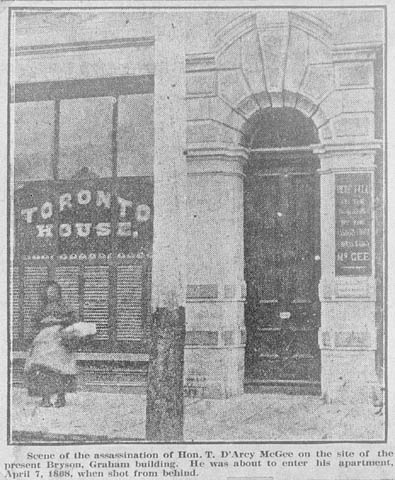 Whelan was arrested less than 20 hours from the time the murder was committed. His rooms at Michael Starr’s Hotel were searched and found to contain a great many Irish nationalist and Fenian publications. Police found several copies of the Irish American and several blank membership cards to Irish nationalist groups, which suggested that he was involved in distributing literature and soliciting memberships. Police also found Whelan’s .32-calibre Smith & Wesson revolver. One bullet had recently been reloaded, and there was evidence the gun had recently been fired. On 9 April, Whelan was charged with the murder of Thomas D’Arcy McGee. 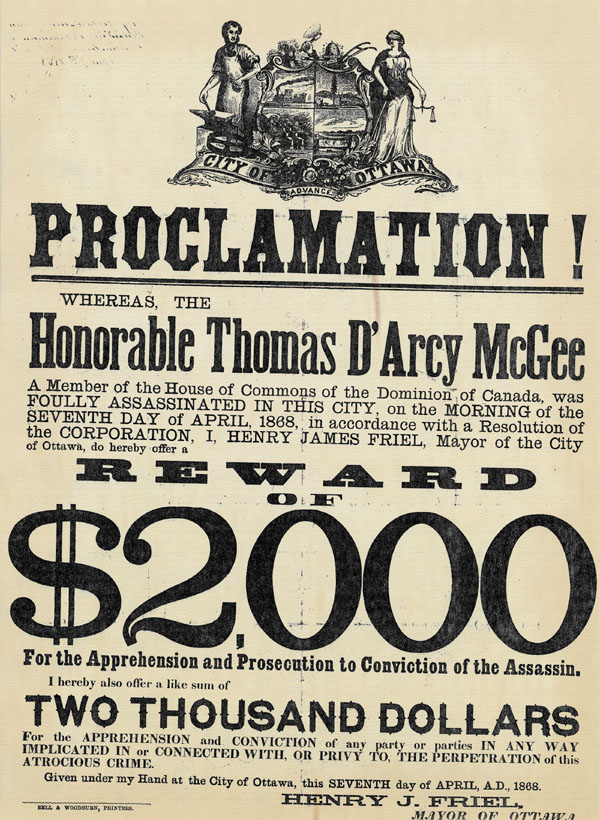 Wanted poster for the assassin of Thomas D'Arcy McGee, 7 April 1868.

Based on the suspicion that the murder was a Fenian conspiracy, 40 others believed to have been involved were also arrested. They included Whelan’s boss, his landlord, a number of his friends, as well as prominent Fenians in Toronto and Montréal. All were later acquitted.

Whelan’s trial began in September. It garnered a great deal of publicity in Canada and abroad, with newspapers referring to Whelan as “the tailor with the red whiskers.”He appeared in court wearing a green suit and white vest.

Testimony revealed that Whelan had been seen outside McGee’s boarding house twice in the days before the murder. He had been seen looking anxious and jittery on Parliament Hill on the night before, and, with his pistol in his pocket, in the House of Commons gallery watching McGee’s final speech. It was stated that Whelan had spoken many times about wanting to kill McGee. A man who was incarcerated in the jail cell across from Whelan testified that Whelan had confessed to feeling remorse about having shot McGee. Another gentleman testified that he had seen the murder take place, and, while his testimony was confused in places, he was sure Whelan was the assassin.

The defense poked holes in the eyewitness testimony and much of that presented by others. But the circumstantial evidence was clearly stacked against Whelan, who took the stand on the final day of the trial. Dressed all in black, he said that he was not a Fenian and had great admiration for McGee. He concluded, “Now I am held to be a black assassin. And my blood runs cold. But I am innocent. I never took that man’s blood.”

After several hours of deliberation, the jury found Patrick James Whelan guilty of the murder of Thomas D’Arcy McGee. He was sentenced to be hanged (see Capital Punishment). The conviction was appealed to the Court of Queen’s Bench of Ontario, but to no avail. A second appeal was rejected by the Ontario Court of Appeal in January 1869.

Whelan languished in cell number 4 in Ottawa’s Carleton County Jail for 10 months. On the day before he was scheduled to be hanged, he composed a three-page letter to Sir John A. Macdonald. As he had in court, he claimed to be a loyal British subject, never to have been a Fenian and that he had not shot McGee. The letter went unanswered.

Whelan ate his last meal on the morning of 11 February 1869. The gallows were ready. Whelan’s hands were lashed behind his back and he was slowly led up the wooden steps of the gallows. A hushed crowd of 5,000 watched intently. Some report that before he was hanged, Whelan admitted that he knew the person who murdered McGee but that he had not fired the shot himself. Whelan’s last words, uttered a moment before a hood was lowered over his head, were “I am innocent.”

The pistol that killed McGee is now on display at the Canadian Museum of History. It had been lost for over 100 years before it was found in October 1973 and sold at auction to the museum in 2005. Ballistics experts in the 1970s were unable to connect the gun to the crime (the bullet that killed McGee was found lodged in the door frame to his home).

Ottawa’s Carleton County Jail has become a hostel where people spend the night and hear of ghost stories — including that of Whelan’s ghost, reportedly seen in his old cell, writing his letter to Macdonald. In August 2002, descendants of Whelan’s family came to the spot near the hostel where Whelan was buried and proclaimed his innocence. A priest said a short prayer. A mound of earth was scooped into a box and taken to Montréal, where it was interred next to Whelan’s widow, Bridget, at Notre-Dame-des-Neiges Cemetery. The remains of Thomas D'Arcy McGee rest in the same cemetery.