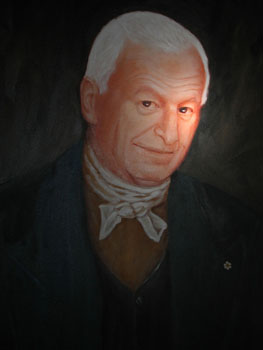 A portrait of Patrick Watson, painted by his wife in the 2000s (painting by Caroline Furey Bamford).

Patrick Watson, television producer and host, filmmaker, author, actor, and communicator (b at Toronto 23 Dec 1929). After receiving an MA from U of T, he abandoned his plans for an academic career and accepted a number of CBC assignments before joining the production staff of "Close-Up" in 1957. From 1960 to 1964 he produced the weekly "Inquiry" from Ottawa. This was followed by 2 years as co-producer (with Douglas Leiterman) and co-host (with John Drainie and Laurier LaPierre) of the popular This Hour Has Seven Days (1964-66), which firmly established his status as national celebrity. 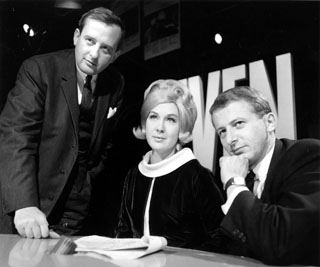 In 1988 Patrick Watson was appointed creative director and principal writer of the CRB Foundation's "Heritage Minutes" project. Comprising more than 60 one-minute movies depicting moments from Canada's past, the "Heritage Minutes" have appeared on television and in movie theatres across the country.

In 1989 he was made chairman of the CBC, with Gérard Veilleux, a former secretary of the federal treasury board, as president and chief executive officer. In late 1990 Watson attracted a storm of controversy when, in an effort to get the corporation budget under control, 1100 CBC jobs were eliminated and several stations closed. Watson shepherded the CBC through the initial phases of its giant restructuring program. He resigned as chairman in 1994.

Since 1999 Patrick Watson has been creative director, media projects, of Historica, the foundation that took over the Heritage Project ("Heritage Minutes") from the CRB Foundation. He is commissioning editor, documentaries, for History Television (Canada), and program development consultant to AAC Fact.

His published works include the psychological thriller Alter Ego (1978); The Struggle for Democracy (1988), which was later produced as a 10-part television series; and the 3-volume print edition of his History Television series The Canadians: Biographies of a Nation (2004).

Watson was named an Officer in the Order of Canada in 1981 and promoted to Companion in 2001.