Martin finally achieved his destiny only to be defeated by his own accidents and the accidents of history. 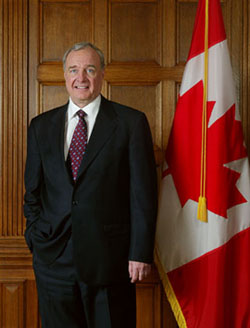 Paul Martin grew up in Windsor until 1946, when the family moved to Ottawa. His influential father, Paul Joseph James Martin, appointed to the Mackenzie King cabinet the previous year, would become one of the architects of Canada's social safety net. In Ottawa the younger Martin was educated at a French elementary and bilingual high school. In 1962, he graduated with an Honours degree in philosophy from St Michael's College at the University of Toronto. In 1965, he graduated from University of Toronto law school and was called to the Ontario bar the next year.

In 1966, Martin moved his new family to Montréal, where he joined Power Corporation of Canada as executive assistant to mentor and president Maurice Strong (and later, Paul Desmarais). Although there was no business experience in the family, Martin displayed a natural entrepreneurial skill. By 1969 he had been appointed vice-president of Power Corp, by 1973, president of Canada Steamship Lines, and two years later, CEO. In August 1981 Martin and a business partner bought the company (renamed CSL Group) for $180 million, and by 1988 Martin was sole owner. His creation of an ocean-going fleet equipped with self-unloading technology was highly successful, but other profit-making strategies later became the subject of criticism. They included decisions to build new ships overseas, set up operations in foreign countries, employ low-wage foreign workers, and have his ships operate under so-called "flags of convenience." Although these were standard procedures in the world of maritime commerce, Martin's connections with CSL were used against him when he entered political life.

The elder Martin had often counselled his son, eager to enter politics, to wait until he was well established in business. In 1988, when Martin was 50, he ran in the federal election in the Montréal-area riding of LaSalle-Émard. That year, the Progressive Conservative Party under Brian Mulroney swept to its second majority victory, but Martin was one of a strong contingent of Liberals elected to Parliament that year. After Liberal leader John Turner resigned, Martin ran against Jean Chrétien in 1990 to become Liberal party chief. One of the major issues of the leadership campaign was the Meech Lake Accord, which Martin supported and Chrétien opposed. At the Calgary convention that chose a new leader, Martin lost on the first ballot — taking 25% of the vote to Chrétien's 57%. The bitter fight for the leadership marked the beginning of a long and complex rivalry between the two men that eventually tore the fabric of the Liberal Party itself.

Chrétien recognized the talent of his rival, asking Martin to co-author the party's 1993 election platform, usually known as the "Red Book." After the 1993 election that brought the Liberals to power with a majority government, Martin was appointed finance minister. During his nine-year tenure in that portfolio, he presented a series of widely watched budgets, but it was those of the mid-1990s that brought him new supporters and critics.

By 1994 the Canadian economy was in a deep recession, and in February of that year Martin slashed funding for unemployment insurance and closed several military bases. In 1995, he presented a landmark Canadian budget. Determined to reduce the Canadian deficit, he cut the spending of virtually every federal department, reducing government expenditures by more than $25 billion (spread over three years) and eliminating 45,000 public service jobs. Federal transfer payments to the provinces for health and education were chopped by $7 billion. Though he was criticized for cutting social programs, his popularity was undiminished. The Chrétien government won a second majority in 1997, in no small part on account of Martin's record.

By 1998, Martin had erased the $42 billion deficit he had inherited, establishing a reputation at home and abroad as a fearless "deficit cutter." He achieved a balanced budget for the fiscal year 1997-98, and was later able to present consecutive budget surpluses, expand government spending, and cut income tax rates. The Liberals won again in the election of 2000, another victory that had much to do with Martin's success as the most influential finance minister in decades.

During his years as finance minister, Martin's relationship with Chrétien was strained, but the tensions were usually kept from public view. The two worked closely together, despite having conflicting ideas on some sensitive files, including Québec, the home base of both politicians. Martin was ambivalent in his support for the Clarity Act, one of Chrétien's key pieces of legislation, privately favouring a less confrontational approach to Québec separatism. By 2002, anticipating Chrétien's retirement, Martin and others had begun campaigning for the Liberal leadership. In the winter and spring of that year, the Liberal government was besieged by accusations of incompetence and corruption, particularly related to the misuse of government funds to sponsor events in Québec. Believing that damaging leaks were being orchestrated from within Cabinet, Chrétien ordered leadership campaigning to stop.

A leadership review, which Liberal Party rules required after each general election, was set for March 2003. By late May 2002, the controversies within the Liberal Party dominated Canadian politics. Martin was on the verge of resigning, when, on 2 June 2002, Chrétien fired him. Martin announced that he would continue to sit in the House of Commons as an ordinary MP. In August, Chrétien, no doubt fearing repudiation at the upcoming party convention, announced he would resign from office, but not for another 18 months.

In November 2003, following a campaign in which Martin's victory was never in serious question, he won the leadership by a massive majority (3,242 to 211 votes, or 95% to 5%) over his only remaining opponent, Sheila Copps. In taking the mantle of Liberal leader, he had succeeded where his father, who had tried three times for the leadership over four decades, had failed. Chrétien left earlier than expected and on 12 December 2003, Martin became Canada's 21st prime minister. He rewarded some but not all of his key supporters; Chrétien loyalists were mostly shut out of the top jobs.

Initially, public approval of the new prime minister was stunningly positive (64%). Yet, despite 15 years in Parliament, more than half of them as a high-profile finance minister, Martin was still largely an unknown quantity. To some observers he was an enigma, a politician without fixed policy priorities. To others, including colleagues and friends, he was a man full of intellectual curiosity whose ambition was to transform the government and the country. Although he was accused during his long run for the leadership and after becoming prime minister of being vague on specifics, he articulated an ambitious number of priorities for his government, promising to create improved ties with the US, a stronger military, and a skilled workforce. He also pledged to reduce health care wait lists and poverty among Indigenous peoples, and to repair what he called "the democratic deficit" in Parliament, expanding the role of backbenchers in government decision making. All this would be done as he cut taxes and reduced the national debt.

Whatever Canadians' expectations and Martin's own ambitions, Canada's new prime minister inherited a party suffering from the wounds of protracted internecine battles .

As Martin struggled to set a new agenda, the auditor-general revived the so-called sponsorship scandal in a report outlining the misspending of $100 million in federal funds, some of which had been diverted through government agencies and advertising companies to Liberal supporters in Québec. As the Liberals sank dramatically in the polls, Martin went on the offensive, denying knowledge or involvement and promising to resign if he was proved untruthful. He appointed the Commission of Inquiry into the Sponsorship Program and Advertising Activities (Gomery Inquiry) to look into what he called "the disgusting mess" and attempted to ally himself with an outraged Canadian public, going on national talk shows and announcing he would punish those responsible.

In February 2004, the prime minister fired ambassador Alfonso Gagliano, who was implicated in the scandal as a former public works minister, and suspended the presidents of the Business Development Bank, VIA Rail, and Canada Post. The scandal and Martin's forceful actions to meet it exacerbated tensions between his supporters and those of former prime minister Chrétien. At the same time, the scandal presented Martin with an opportunity to act on promises to reform the government structure and end the concentration of power in the Prime Minister's Office. Martin pledged that in the future all senior appointments, including those to Crown Corporations and the Supreme Court, would be vetted by Parliament.

The sponsorship affair severely diminished the popularity of Martin's government. In the election of 28 June 2004, the Liberals were reduced to a minority in the Commons, winning 135 of 308 seats. Martin continued to pursue an active agenda but found that much of his attention was now focussed on saving his beleaguered government. The bold businessman and finance minister was now seen as cautious and indecisive, both in Ottawa and internationally.

The first report of the Gomery Commission, released 1 November 2005, exonerated Martin, but his government was damaged by the report, which pointed to the misuse of sponsorship funds and corruption within the Québec wing of the federal Liberal Party. Sensing an opportunity, the opposition parties combined on 28 November to bring down the government and force an election. On 23 January 2006, the Liberals won 103 seats, 21 fewer than Stephen Harper’s Conservatives. That night, Martin conceded defeat and announced that he would step down as Liberal leader.

Martin had floundered on international issues, having trouble producing a statement of Canadian foreign policy and deciding whether Canada should take part in the US ballistic missile defence system. But he was extraordinarily active on several other fronts during his two years in office. The government legalized same-sex marriage, created a national child care program, negotiated a $41 billion health care accord with the provinces, and forged the Kelowna Accord with the provinces and territories to improve the quality of life for Indigenous peoples.

Although Martin resigned as party leader in 2006, he remained as Member of Parliament for the riding of LaSalle–Émard. He did not run for re-election in the 2008 federal election.

Since retiring from politics, Martin and his family have established the Capital for Aboriginal Prosperity and Entrepreneurship (CAPE) Fund and the Martin Family Initiative (MFI). The MFI works with Indigenous leaders, governments and the private sector “to support K-12 education for Indigenous children, and the wider determinants that influence their educational outcomes,” such as health. Martin was also founding co-chair of the Congo Basin Forest Fund and works with the Advisory Council of the Coalition for Dialogue on Africa. Martin was also a member of the Global Ocean Commission (2013–16).