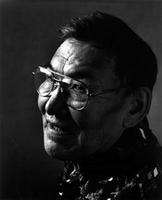 Pauta Saila, sculptor (b at a hunting camp on the W coast S Baffin I, NWT Dec 1917; d at Cape Dorset 9 June 2009). Technically skilful in stone or on paper, Pauta was known particularly for his "dancing bears," powerful, somewhat abstract sculptures of upright polar bears. The son of Saila, an important Inuit leader, Pauta grew up on his father's immense southwestern Baffin hunting territory and knew the habits of polar bears from close observation. He lived with his second wife, well-known graphic artist Pitaloosie, at Cape Dorset, and some 40 of his own drawings were published as prints. Widely exhibited and in many public collections, an important work is his massive Bear, executed in 1967 during the International Sculpture Symposium in High Park, Toronto, and now at the McMichael Collection at Kleinburg, Ontario. In the 1960s, Pauta carved various arctic creatures as well as bears, but in the 1980s bears balancing on one foot became his principal theme.
×