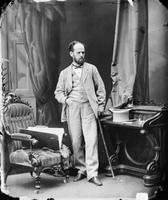 Peter Mitchell, premier of New Brunswick (1866–67), lawyer, shipbuilder (born 4 January 1824 in Newcastle, New Brunswick; died 25 October 1899 in Montréal, QC). Premier of New Brunswick in 1867, Peter Mitchell was instrumental in bringing the colony into Confederation. A colourful swashbuckler, Mitchell was best known for the international incident with which he was embroiled while acting as Canada's minister of fisheries in Sir John A. Macdonald’s first Cabinet.

Peter Mitchell was the son of Peter Mitchell and Barbara Grant, who immigrated to New Brunswick from Scotland in 1818 and settled on the Miramichi River. The elder Peter Mitchell was a hotel and tavern keeper, and the young Mitchell grew up to be a fierce opponent of prohibition. He was educated at the Newcastle Grammar School before he apprenticed with the law office of George Kerr. From 1847 to 1852, he practised law in Newcastle in partnership with John Mercer Johnson of Chatham, New Brunswick.

In 1853, Mitchell married Isabella Gough, with whom he had one daughter. The marriage brought Mitchell new connections that furthered his business interests in the shipbuilding and lumber trades. From 1853 to 1861, he ran a shipbuilding business with his wife’s brother-in-law John Haws that produced more than a dozen vessels. After the partnership ended, Mitchell continued to expand his business endeavours. By 1864, he employed 250 people in his shipyards and another 100 to load ships with lumber for transatlantic trade. Despite the booming maritime economy in mid-19th-century New Brunswick, Mitchell had frequent business difficulties and often had trouble paying his bills on time.

Peter Mitchell entered politics in an 1852 by-election, advocating for responsible government and reduced salaries for public officials. He was defeated at the polls. In his 1856 campaign, he emphasized his opposition to prohibition legislation, while distributing rum to electors on the campaign trail. He was elected as an independent for Northumberland and became a member of the legislative Council in 1861, serving as a minister in the governments of Charles Fisher and Samuel Leonard Tilley. As a politician, Mitchell became known for his headstrong personality and unwillingness to compromise with his opponents. Later is his political career, he recalled a conflict with Tilley over the planned route for the Intercolonial Railway and concluded, “We had some very angry words over it, but my force of character settled the matter.”

A strong supporter of Confederation, Peter Mitchell attended the Charlottetown and Québec Conferences in 1864. By 1865, Premier Samuel Leonard Tilley, who supported Confederation, found that a majority of the New Brunswick legislature had swung against it. Lieutenant-Governor Arthur Gordon believed that the issue of Confederation should “be put ‘squarely’ before the people” and pressured Tilley to dissolve his government, which had not been elected, it was argued, on a Confederation platform. After Tilley acquiesced and called a snap election, Mitchell criticized the lieutenant-governor for anti-Confederation bias and took his grievances to the British Home Office.

During the 1865 elections, politicians who supported Confederation, including Tilley and Mitchell, were defeated at the polls. After the anti-Confederation administration of Albert J. Smith collapsed in this political climate — popular opinion had shifted toward Confederation in New Brunswick, and the Smith administration could agree on little more than their dislike of federal union — Tilley turned down the premiership, and Gordon asked Mitchell to form a Conservative government.

Although Mitchell and Tilley had opposite views on prohibition and very different personalities, they shared a common commitment to Confederation and the building of the Intercolonial Railway. As a well-known businessman and director of the Merchants’ Marine Insurance Company of Canada, Mitchell was in the ideal position to counter arguments from New Brunswick merchants that Confederation would undermine their economic interests. Mitchell attended the London Conference of 1866 but resented the fact that Sir John A. Macdonald treated Tilley, now provincial secretary, as the real leader of New Brunswick. Macdonald and Mitchell clashed over numerous points of policy, beginning an acrimonious relationship between the two men that lasted for decades.

In mid-1867, Peter Mitchell was appointed to the Senate and to Sir John A. Macdonald’s Cabinet as minister of Marine and Fisheries, where he proved himself both innovative and aggressive. The Marine and Fisheries portfolio was diverse, including navigational issues, fishing regulations and assistance for sick and disabled sailors. As minister, Mitchell added six ships to Canada’s two-vessel navy. The new ships were built to resemble American fishing boats, save the fact that they were armed. In 1870, the fleet created an international incident when it seized American fishermen in Canadian waters. After months in which Canadian–United States relations were strained, Mitchell challenged American President Ulysses S. Grant over American fishing rights in Canadian waters. Mitchell insisted that Cabinet request a joint commission on the matter. The commission resulted in the Treaty of Washington — negotiated the following year — in which the US was admitted to the Canadian inshore fishery for 12 years. In return, the US paid $5.5 million, and Canadian fish were allowed on the American market free of tariffs.

In 1872, Mitchell resigned his seat in the Senate to run for the Northumberland, New Brunswick, seat and won. The following year, the Pacific Scandal toppled the Macdonald government. Mitchell, not involved in the scandal, left the Conservatives and continued to sit in Commons as an independent. This ended Mitchell's political influence, as he was distrusted by both the Liberals and the Conservatives.

Mitchell remained in politics for several years after his re-election in 1874. He resigned his seat briefly in January 1878 following a conflict of interest scandal he was involved with, but was returned to his seat that February. However, he lost his seat in the general election in September 1878.

In 1885, Mitchell purchased the Montreal Herald, which printed criticism of Macdonald’s administration. Mitchell’s self-esteem increased as a result, as did his unreliability. He drifted to the Liberals, nursing grievances against Macdonald and others. He regained his Northumberland seat in 1882 and 1887 as an Independent Liberal, but lost in both the 1891 and 1896 general elections.

After Mitchell’s wife, Isabella, died in 1889, he lived an increasingly lonely life in the 1890s. Mitchell suffered a seizure in 1899 and was found dead in his room at the Windsor Hotel, Montréal, where he lived during his last years.

As Premier of New Brunswick in 1867, Mitchell was instrumental to bringing the colony into Confederation. As minister of Marine and Fisheries, he established Canada’s first fleet of cruisers to protect Canadian fisheries, in addition to lighthouses on the sea coast and on the Great Lakes. His dealings with the United States concerning fishing rights demonstrated Canadian sovereignty over Canadian waters. His nephew, Charles Richmond Mitchell, became leader of the Liberal Party of Alberta in 1924 and served as Leader of the Official Opposition for two years before being appointed to Alberta’s Supreme Court.