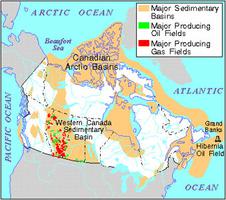 Since its first commercial exploitation in the 1850s, petroleum has become the major energy source of Canada and the industrial world. Petroleum is the mixture of complex hydrogen and carbon compounds, known as hydrocarbons, found in the Earth's crust. Most of these compounds are the fossil remains of prehistoric forests and seabeds and can be thought of as fossilized biomass. If fossil hydrocarbons are very high in carbon content and in solid form, they are classified as coal. Petroleum, however, can occur in a solid or viscous-liquid form, known as bitumen, or in liquid and gaseous forms, crude oil and natural gas, respectively. The main hydrocarbon groups in petroleum are paraffins, naphthenes and aromatics, with minor amounts of oxygen, nitrogen and sulphur compounds. Except for rare deposits of exceptionally pure natural gas or crude oil, most petroleum requires processing to make it useful.

Although petroleum is occasionally found seeping out of surface rocks, most is recovered by drilling deep wells. Crude oil, the unrefined liquid found in underground reservoirs, can vary in appearance from a thin, colourless liquid composed primarily of naphtha, to a heavy, black, gummy substance with a high asphalt content. These forms require relatively complex processing. Most oil is intermediate between these extremes and can be industrially refined and distilled into a wide range of combustible fuels, petrochemical feedstocks and lubricants.

Natural gas, a colourless, odourless, combustible mixture of methane, ethane, butane and propane, is often found associated with crude-oil deposits, as well as in separate commercial deposits or "fields." Much of the natural gas found in the foothills of the Rocky Mts in Alberta contains a significant proportion of hydrogen sulphide and is called "sour" gas. This poisonous, colourless, foul-smelling, corrosive gas necessitates extra precaution in drilling, and the hydrogen sulphide must be removed to make the natural gas suitable for domestic or industrial use. The removal yields elemental sulphur. Bitumen, also known as asphalt or tar, is a dark brown-to-black mixture of oil, asphaltine and resin, which has lost its more volatile compounds through evaporation and oxidation. When found mixed with sedimentary particles, as in the vast Athabasca oil-sand deposits in Alberta, it is called tar sand or oil sand. Complex processing is required to produce usable oil from bitumen.

Most oil or gas does not form within the reservoir in which it is found. It migrates, often over great distances, from a "source rock," a sediment rich in organic matter, to the petroleum reservoir, usually a porous sedimentary rock. Oil can be generated from any organic material, eg, fish, marine plants, terrestrial plants and animals. A primary source of organic material is marine algae. These minute, one-celled organisms form the bulk of plant life in the world's oceans. They are ideally situated for preservation in deep oceans because of their planktonic (ie, free-floating) existence. When they die, algae sink to the seafloor where they are buried within silts and clays. Since burrowing organisms are not present, the algal material builds up to form an appreciable part (1-2%) of the total sediment. Bacterial action releases oxygen from this material, further concentrating the hydrogen and carbon molecules required to produce petroleum.

Petroleum formation can begin almost as soon as the organic-laden silt becomes buried. Carbon-14 datings of such silts in the Gulf of Mexico have yielded ages of as little as 500 years. Conversely, investigations of certain types of oil fields have shown oil and gas accumulating millions of years after the deposition of the source rock. Alberta's Leduc oil field is found in carbonate rocks of Devonian age, deposited 350 million years ago, yet the formation of oil in Devonian source rocks did not occur until they were buried to a sufficient depth in the Cretaceous period, more than 250 million years later.

A sedimentary basin is a large downwarp of the Earth's crust in which sediment (weathered rock debris and chemical precipitates) has accumulated. Oil and gas accumulations are always found in, or associated with, sedimentary basins. Canada possesses 40 basins, covering 47% of the land surface and continental slopes, that are capable of containing hydrocarbons. Only a few of these basins, situated on land, now actually produce oil or gas. Canada's greatest potential for future sources of hydrocarbons lies offshore in the Arctic and off the East Coast. The major producing basin in Canada is the Western Canada Sedimentary Basin, situated beneath Alberta, northeastern BC, southern Saskatchewan, southwestern Manitoba and the western NWT. It extends from the Arctic Ocean southeastwards across the North American continent to the Gulf of Mexico. It is a virtual textbook of natural history, recording the geological, environmental and biological events that have occurred on the North American continent over the last 600 million years. The Canadian part of the basin covers 1 815 000 km2.

Other major Canadian sedimentary basins include the Hudson Bay Basin (970 000 km2), beneath Hudson Bay; the Mackenzie and Banks basins, beneath the Beaufort Sea (131 000 km2); the Canadian Arctic Basin, covering most of the arctic islands but excluding Baffin I (1 721 000 km2); the Baffin Bay and Labrador Sea shelves, off the East Coast (780 000 km2); the Scotian Shelf and the Grand Banks, south of Nova Scotia and Newfoundland (900 000 km2); and the Anticosti and Maritimes basins in the Gulf of St Lawrence (340 000 km2). Programs by private industry and government are under way to discover and exploit the vast resources in the Beaufort Sea, the arctic islands, the Scotian Shelf and the East Coast off Labrador and Newfoundland.

Oil was first discovered in southwestern Ontario in 1857. Early explorers used the presence of oil seeps on the surface to locate their targets. In Alberta, Canada's largest oil-producing province, gas was discovered in Medicine Hat in 1904 and oil at Turner Valley in 1914. Major discoveries in western Canada were sporadic until after WWII, when renewed activity led to the discovery of the Leduc oil field in 1947. Since then the industry has played a major role in Canada's development. Some of Canada's major petroleum deposits include the Cretaceous Pembina oil field, the Devonian Bonnie Glen, Leduc, Norman Wells, Redwater and Wizard Lake oil fields, the Cretaceous Athabasca oil sands, the Cretaceous Suffield gas field and the Cretaceous and Triassic Deep Basin gas fields, all in Alberta. In 1998, Canadian production of crude oil and equivalent was approximately 345 900 m3, or 2.2 million barrels, per day. The Hibernia oil field's first full year of production added 10 300 m3, or 64 800 barrels, per day. Operations were resumed at the Cohasset platform, offshore Nova Scotia, increasing production levels, and in western Canada, production records were set for bitumen and synthetic crude oil at Syncrude Canada Ltd and Suncor Energy Inc. Suncor's daily output was remarkable, jumping by approximately 50% following the opening of its fixed plant expansion in July and the Steepbank Mine in September.

To regulate and control the exploration and development of petroleum resources in Canada, the disposition of all oil and gas rights is controlled by various levels of government. Natural Resources Canada is responsible for all federal crown acreage, which is primarily situated north of the 60th parallel and in offshore waters. Each provincial government also has a separate energy resources ministry to regulate all provincial crown acreage. Aboriginal Affairs and Northern Development Canada acts on behalf of status Aboriginal People for all reservation land. Each government department periodically posts land sales in parts of the area for which it is responsible. The rights to explore and develop oil and gas on leases or licences are purchased by sealed bid in an open auction. The highest bidder purchases the exclusive rights to lease the land for a given period (usually 3-10 years) during which time it is allowed to explore for oil and gas in an approved manner.

The federal government also maintains the right to establish exploration agreements on federal crown lands without public notice if it feels that it is in the public interest (eg, in expensive frontier exploration) or that there is a need to act quickly. Freehold lands are lands in which the mineral and surface rights were granted to individuals or large companies (eg, the Hudson's Bay Company). In the late 19th century, large tracts of freehold land were distributed to pioneers in western Canada and to the Canadian Pacific Railway. The oil and gas rights to freehold lands can be bought and sold privately by the individual or company, but the province or federal government regulates their exploitation.

The petroleum industry plays an important role in the energy sector of the Canadian economy. Because Canada only produces part of the oil necessary to meet its consumption requirements, large amounts must be imported. Price and supply fluctuations of imported oil affect the stability of the Canadian economy. One step taken to reduce this dependence on foreign oil was a comprehensive package of legislation, the National Energy Program, announced by the Liberal federal government in 1980. The NEP established a price structure and revenue-sharing agreement and was intended to ensure petroleum-industry stability and to redistribute the costs of petroleum consumption throughout Canada. It also established incentives to conserve energy, to increase Canadian ownership of the petroleum industry, expand exploration in Canadian frontier areas and to develop alternatives to oil consumption. The intended outcome of the program was to establish eventual total energy self-sufficiency in Canada. Ottawa, the provinces and the petroleum industry were engaged in heated, sometimes acrimonious, debate over the NEP.

After the federal election of 1984, in which the Conservatives replaced the Liberals in government, most of the NEP's policies were gradually eliminated. The price of oil and natural gas was to move in concert with the world prices and more exports were allowed. The effectiveness of this move was blurred, however, by the 50% drop in world oil prices in 1986. Energy investments were cancelled across the country and the western economy was once again battered. The oil industry's prospects have improved since, caused by modest rebounds in world oil prices and by the industry's expectation that the free trade agreement with the US negotiated in late 1987 would do much to stabilize continental energy development.

Notwithstanding the Canada-US free trade agreement and then NAFTA, oil prices continue to rise and fall. In 1998, economic problems in Asia dampened world demand for oil, weakening the global oil market. At the same time, non-OPEC countries produced more oil while production cuts from OPEC, and some non-OPEC countries, failed to balance the market. Oil prices fell dramatically from the highs achieved in 1991 after the Gulf War, reaching 12-year lows.