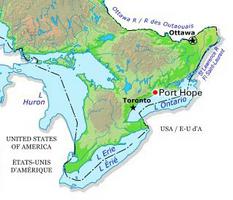 Port Hope, Ont, incorporated as a municipality in 2001, population 16 214 (2011c), 16 390 (2006c). The Municipality of Port Hope is the result of a merger between the town of Port Hope (incorporated in 1834) and the township of Hope (incorporated in 1792). Port Hope is located on Lake Ontario at the mouth of the Ganaraska Ruver, 100 km east of Toronto. The site originally was a Mississauga village named Cochingomink. It was a fur-trade post from 1778, and was named for a time Smith's Creek after Peter Smith, a trader. In the early 1790s after governor Simcoe established the township of Hope, LOYALISTS arrived to settle the area. The township was named to honour Colonel Henry Hope, former lieutenant-governor of Quebec. From 1817-19 Port Hope was known as Toronto but the citizens then decided on the name Port Hope.

Long a manufacturing and regional commercial centre, Port Hope's main street is one of the best preserved from late 19th-century Ontario. It is now a centre for uranium refining and the manufacture of machinery, tools, plastics and rubber. Trinity College School, founded 1865, is one of the oldest private schools in Canada. The town is home to author Farley MOWAT and artist David BLACKWOOD.