Portrait of a Negro Slave 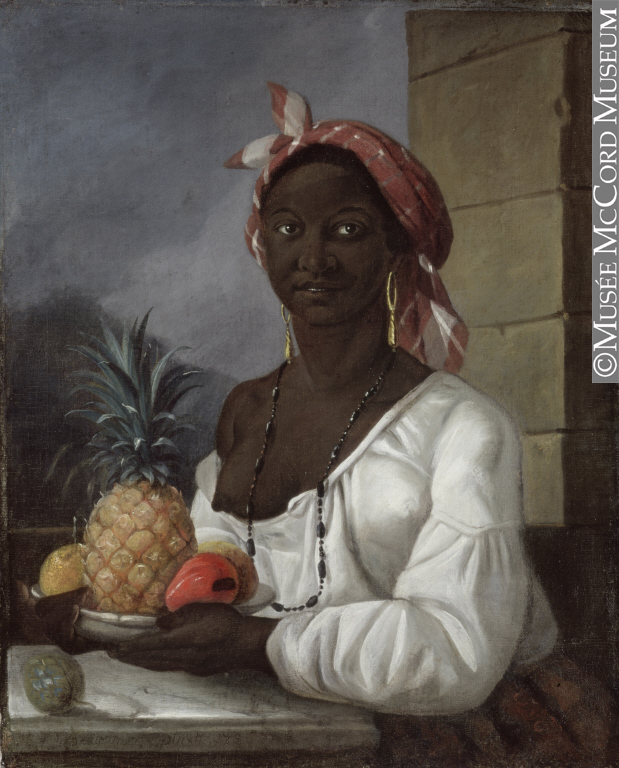 The 18th century realm of “high art” portraiture was as exclusive a domain in New France as in Europe. Within the commissioning process, the art patron exerted power over the artist to ensure the production of a flattering likeness, which customarily came to bear the sitter’s name as its title. Such access to cultural capital was a privilege largely unattainable by the masses of disenfranchised people of colour and poor whites. However, in the unique case of Portrait of a Negro Slave or Negress (1786), the title indicates the social status and race of the sitter. The context in which this famous Canadian portrait was created, as well as its meanings, was a dramatic departure from Western oil portraiture: the sitter was an enslaved Black woman and the painter was most likely her owner.

Now known as Portrait of a Haitian Woman (1786) and painted by the French Canadian artist François Malépart de Beaucourt, this work is the most thorough and professionally rendered representation of a Black slave in the context of Québec and Canada at this historical juncture. It offers unparalleled opportunity to explore the specific colonial context of enslavement in 18th-century Montréal and Québec. Individual representations of slaves were a rarity.Since slave portraits were usually commissioned and owned by the slave owner, they functioned as a testament to the white owner’s status and colonial reach. Slaves generally lacked the funds to commission such portraits or have private residences in which to display them, and they were less likely to receive compensation for their work as models. As the sitter but not the patron, they wielded no power over the portraitist.

The sexually charged nature of Portrait of a Haitian Woman— the deliberate juxtaposition of the breast with the tropical fruit — is indicative of the precarious status of Black female slaves and their vulnerability to sexual exploitation. Upper class, white female sitters simply would not have been represented in this fashion. Due to the practice of “breeding,”all aspects of female slave life came under invasive scrutiny from slave owners, including their sexuality, marital status, workload and diet. Therefore, the exposed breast of the enslaved Black female in Portrait of a Haitian Woman indicates her sexuality and “breeding” potential as active considerations in her economic value. Beaucourt’s portrait participated in the creation of sexual stereotypes through which Black women were viewed as sexually lascivious and deviant, which served to justify their sexual exploitation within the Atlantic Slave Trade.

The pioneering research of Marcel Trudel has determined that by 1759 slaves of both Indigenous (panis) and Black origin — numbering 3,604 — lived in New France, with 52.3 per cent residing in or near Montréal. Of these slaves, 1,132 were classified as Negroes. The merchant class owned more than a quarter (1,068); however, the gentry, governors, notaries, doctors, military and clergy also held slaves. Black female slaves were the minority, making them highly visible, “exotic” commodities.

Beaucourt, the son of a French soldier and amateur painter, was born on 25 February 1740 in La Prairie, Québec. While studying abroad in Bordeaux, France, under the instruction of Joseph-Gaétant Camagne, François met and married his instructor’s daughter, Benoite Gaétant. Although mystery surrounded the couple’s whereabouts between 1784 and 1792, they reappeared in Philadelphia and then Montréal. Recent findings have placed the couple in Saint-Domingue (what is now Haiti) on the eve of the Haitian Revolution. Comprising the western third of the island of Hispaniola, Saint-Domingue was nicknamed “the pearl of the Antilles” due to its status as France’s richest colony.

The Dominguan slave system was particularly brutal, with 50 per cent of newly arriving African slaves dying within their first three to five years on the island. As such, more than other sites of slavery, a large portion of the Dominguan slave population was African-born and unmixed with Europeans. At the time the painting was made, the Dominguan population comprised 31,000 whites (5.92 per cent), 28,000 free-coloureds (5.34 per cent) and 465,000 slaves (88.74 per cent). Known as affranchis, the free-coloureds were largely of mixed African and European ancestry; mainly the product of white slave owing fathers and enslaved Black mothers. The visual signs of their racial hybridity — such as complexion, hair texture, facial features, and eye colour — often made them distinct in appearance. Given these racial and demographic facts alone, it is likely that any Black Dominguan woman that Beaucourt painted at this time was enslaved. But when one considers that the Black female sitter’s dark complexion placed her outside of the typical racial description of the affranchis, the likelihood of her enslavement further increases.

Since the result of the Haitian Revolution (1791–1804) was the liberation of African slaves in Haiti and the founding of the first universally democratic nation in the Western hemisphere — a nation without slavery — this Black woman’s possible forced migration to Québec holds multiple tragedies. The first is her forced exile from family, friends, community and environment and her movement from a familiar life (however harrowing) to another, unfamiliar and foreign place. And the second is that given the dates of François and Benoite’s departure from Haiti, had this Black woman been left behind and survived the revolution, she would have lived out the rest of her life a free woman. In the majority of the British Empire — including Québec — slavery was not abolished until 1833.

The most likely sitter is Marie-Thérèse-Zémire, one of two Black slaves documented as the property of the artist’s white wife.As corresponds with her complexion in the portrait, Marie was identified as négresse. Marie was said to be 29 at her death on 15 December 1800, making her 15 when the portrait was painted in 1786. After François died in Montréal on 24 June 1794, Benoite outlived him by 50 years, continuing in her role as slave mistress.Over the next few years, she owned several other slaves, including, in 1801, a 12 year old named Catherine.