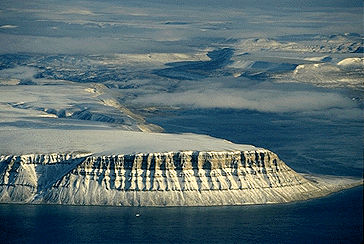 Because most of Devon Island is a plateau, it is a barren landscape, dominated by frost-shattered rocks (Corel Professional Photos). 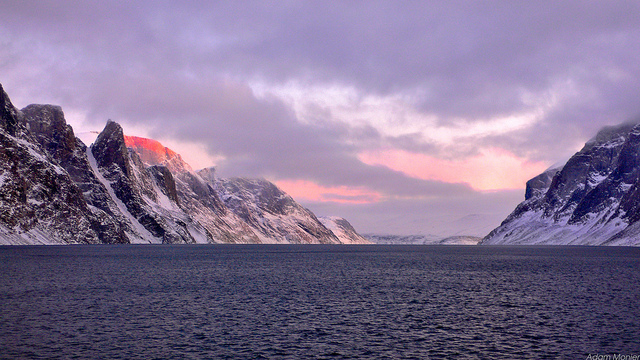 Qitdlarssuaq (also known as Qillarsuaq or Qillaq), Inuit leader and angakkuq (shaman) (born in southeastern Baffin Island, NT; died in 1875 near Cape Herschel, NT). During the mid-1800s, he led a small band of approximately 50 North Baffin Inuit to northwestern Greenland as he escaped vengeance for murder. Details about this polar migration have been obscured by inconsistencies in historical and ethnological accounts. Despite these issues, the story of Qitdlarssuaq is preserved in local history and Inuit oral tradition.

Little is known of Qitdlarssuaq’s early life apart from that he spent it in Cumberland Sound, in what is now the Qikiqtaaluk Region of Nunavut. Like Inuit of his time, he lived in small camps of a few families each, in snowhouses on the sea ice or sealskin tents, or qammaqs (sod-houses) on the land, according to the season. Each camp was led by a man who had earned the confidence of the group. An angakkuq (shaman), Qitdlarssuaq was a respected and feared leader among his people.

Still seeking vengeance, Ikieraping’s family found and attacked Qitdlarssuaq’s group around 1850 near Pond Inlet. While they were able to fend off their assailants, Qitdlarssuaq was determined to put as much distance between himself and his enemies as possible, and moved northward. He and 50 of his followers crossed Lancaster Sound by dogsled and spent several years on Devon Island, located on Baffin Bay in present-day Nunavut.

On Devon Island in the summer of 1853, Qitdlarssuaq’s group encountered British naval officer Captain Edward Inglefield and his Greenlandic interpreter. Both were on the island in search of missing Arctic explorer John Franklin. During their interaction with Qitdlarssuaq, Inglefield’s interpreter likely informed Qitdlarssuaq about the existence and approximate whereabouts of the Inughuit (Polar Inuit) of northern Greenland. New-found knowledge about the land of the Inughuit likely prompted Qitdlarssuaq’s migration to Greenland. There, he could finally escape his enemies and start anew. Inuit legend, however, maintains that Qitdlarssuaq learned of the Inughuit from spiritual flights and visions, not from Inglefield and his interpreter. Whatever the source of his inspiration, Qitdlarssuaq began a great journey from Devon Island to Greenland in the spring of 1859 with his followers.

Laden with all their equipment, including their kayaks, the Baffin Island Inuit began the long journey to Greenland, travelling north-eastwards along the coast of Ellesmere Island. Their trek was a difficult one. The group travelled by dog team through rough and broken ice, as they waited for the right ice conditions to cross deep bays and other large bodies of water. They endured treacherous terrain, climbing and descending glaciers, while also hunting along the way, to provide food and skins for clothing. The journey took several years. Legend says that Qitdlarssuaq navigated partly by means of his shamanic powers, leaving his body in spiritual flights and examining the terrain ahead.

In 1861–62, at the island of Ingirsarvik, off the east coast of Ellesmere Island, Uqi had second thoughts about following Qitdlarssuaq into the unknown. He questioned Qitdlarssuaq’s leadership, and convinced at least 24 other people to turn back towards Devon Island with him. With his remaining followers, Qitdlarssuaq continued to Greenland. Around 1863, his group encountered an Inuk named Arrutak near Etah, in northern Greenland. Following Arrutak’s direction, the Baffin Islanders moved approximately 30 km south to an Inughuit hunting camp in Pitorarvik, Greenland. Their journey was finally over. Qitdlarssuaq and his people had found the land that they travelled so far to see.

Their arrival in Greenland was a welcome event for the Inughuit. They were a small and isolated group struggling to survive without hunting tools and equipment used by most other Inuit at the time, such as kayaks, fish spears, and bows and arrows. Qitdlarssuaq’s group re-introduced these tools to the Inughuit, and shared knowledge about hunting and surviving in the Arctic. Through the exchange of technology and intermarriage, the two groups eventually integrated. The Inughuit also came to highly respect Qitdlarssuaq, whom they referred to as “The Great One.”

After spending approximately seven years living with the Inughuit in Greenland (between about 1862–63 and 1869–70), an aging Qitdlarssuaq began to feel a strong desire to return to his homeland. Some accounts maintain that the real reason Qitdlarssauq sought to return home was because he wanted to escape vengeance for murder a second time. He and two of his accomplices allegedly killed the friend of a powerful sorcerer, Avatannguaq. Whatever the reason for his departure, Qitdlarssuaq and about 21 of his followers set out for a return to Baffin Island in 1873. Content in their new home, the rest of his followers stayed behind in Greenland.

In the first year of his journey home, the old leader died along the way, somewhere between Cape Sabine and Cape Herschel on eastern Ellesmere Island. Continuing on without Qitdlarssuaq, his followers made it as far as Makinson Inlet on southeastern Ellesmere Island, where they camped for the winter. In the spring, the group struggled to find a location with enough game and fish to feed everyone. Many starved along the way, and some resorted to murder and cannibalism. Only five of the original band of 21 survived. The survivors returned to Greenland two years later, around 1875, where they remained. Many families residing in present-day northwestern Greenland trace their ancestry to the allarsuit — the Canadian migrants.

Qitdlarssuaq’s journey has been told by a number of different people, both Inuit and non-Inuit. As a result, there are many inconsistences and errors in their accounts, making it difficult to ascertain historical fact from fiction. The earliest accounts originate from local and oral histories in north Baffin and especially in Qaanaaq, Greenland, where the Inughuit now live. These accounts have preserved stories about the events and people associated with Qitdlarssuaq’s journey.

The Western world most likely learned about the polar migration from Danish ethnologist Knud Rasmussen, who, in 1905, interviewed some of the journey’s survivors. Additional information about Qitdlarssuaq and his journey have been provided by other ethnographers and scholars, including H.P. Steensby (1910), P. Freuchen (1961), E. Holtved (1967), R. Petersen (1962) and R. Gilberg (1974–5), among others.

A Catholic priest, Father Guy Mary-Rousselière, wrote what is arguably the most well-known account of the journey. He spent 36 years in Pond Inlet, during which time he became closely involved with the descendants of Qitdlarssuaq in Canada and Greenland. He arranged a number of meetings between these descendants to celebrate kinship ties. The meetings came to an end after Mary-Rousselière died tragically in a fire that destroyed his church and home in 1994. Before his death, Mary-Rousselière had become quite knowledgeable about Qitdlarssuaq’s migration and wrote a book about it in 1980: Qitdlarssuaq — l'histoire d'une migration polaire (Qitdlarssuaq — The Story of a Polar Migration).

In 2012, Stephen A. Smith and Julia Szucs directed a National Film Board of Canada documentary, Vanishing Point, which tells the story of present-day Inuit communities in Baffin Island and northwestern Greenland, and their historical connection to one another and Qitdlarssuaq’s migration. Qitdlarssuaq’s descendant, Navarana, who is also an Inughuit elder, describes the cultural and historical ties that bind these communities.

The story of Qitdlarssuaq describes one of the earliest polar migrations by Inuit in Canadian history. The memory of Qitdlarssuaq and his journey is preserved in local and oral history, as well as in various historical and ethnological accounts. His name is also immortalized in Pond Inlet where Mount Qitdlarssuaq bears his name. Qitdlarssuaq’s impact on Inuit community and culture is still seen in the kinship ties that unite the Baffin Island and Greenlandic Inuit.