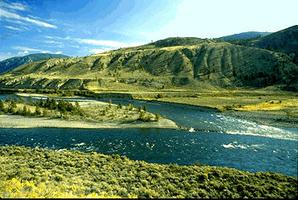 The Fraser River near Lytton, BC (Corel Professional Photos). 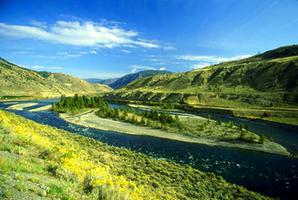 The South and North Thompson Rivers meet at Kamloops in BC and pour into the Fraser at Lytton (Corel Professional Photos).

A river landform is a feature resulting from the movement of water on the Earth's surface. In a geological context, flowing water is the most important external process shaping the Earth's surface. river landforms may be depositional, including floodplains, river terraces, alluvial fans and deltas; or erosional, eg, the valleys, canyons and sculptured badlands that provide some of Canada's most impressive scenery. River processes are especially important in regions ranging through semiarid, subhumid, humid, to very wet, but even in arid regions rare cloudbursts may accomplish a significant amount of geomorphic work.

In the classic era of Geomorphology, which employed an intuitive approach to research and ended around 1950, fluvial landforms were studied in the context of William M. Davis's cycle of erosion. The cycle concept is a simplistic but pedagogically effective way of looking at landscape development in a humid, temperate climate where river action dominates landscape sculpture (eg, southern Canada). Davis's theory states that, after initial uplift of a landmass, the landscape passes sequentially through the stages of youth, maturity and old age. Youth is characterized by V-shaped valleys and irregular gradients; maturity by long valley slopes, meandering streams and floodplain development; old age by sluggish streams, broad floodplains, oxbow lakes and low hills called monadnocks. Such a landscape is shaped essentially through a combination of fluvial and slope-forming processes, leading eventually to the formation of a flat erosion surface or peneplain, close to sea level. Peneplanation may be followed by uplift, resulting in the initiation of a new cycle of erosion. Uplift before the cycle is completed leads to stream rejuvenation, entrenchment and stepped erosion levels. Valley morphology commonly reflects the controlling influence of bedrock geology and of climate. Other important models in fluvial geomorphology have been proposed to account for variations in river form in other climate regions. Modern research is exploring new conceptual approaches in the interpretation of fluvial landforms.

Fluvial activity has played a dominant role in shaping large segments of the Canadian landscape. The scenario is complex because most regions shaped by rivers now also bear the imprint of Quaternary Glaciation. Even today, 10 000 years or more since the last major glaciation, Canadian rivers are still adjusting by continuing to erode glacier-derived sediment. Many of the magnificent valleys that now dissect the cordillera were formed by stream rejuvenation and entrenchment during uplift in the Tertiary period (65-1.65 million years ago), eg, the Fraser, Thompson and Okanagan valleys in the Fraser-Nechako Plateau, BC. Some Cordilleran river valleys were also partly infilled with a combination of glacial and glaciofluvial detritus during the Ice Ages (1.65 million-10 000 years ago), but subsequent postglacial downcutting has left a series of high-level river terraces, eg, Bow River, Alta. Terracing of valley fills is also common in central and eastern Canada.

The flattish Prairies were formed by the long-continued deposition of rock waste eroded from the Cordillera by easterly flowing streams (with some contribution from glacial deposition). The modern streams that traverse the prairies (eg, Saskatchewan) are shallowly entrenched in the underlying glacial materials to a maximum depth of several hundred metres. In some dry parts of Alberta the incision of streams into Cretaceous sediments (144.2-65 million years old) has created a badlands topography, such as the Red Deer River at Drumheller, Alta.

Most of the Canadian Shield had been bevelled by weathering and erosion surfaces long before the advent of the Quaternary ice ages. The preglacial drainage patterns were deranged during the ice ages and valleys were buried under glacial drift, leaving a legacy of lakes. Some of the buried valleys are now being re-excavated by modern stream action. In central Canada, before the onset of the ice ages, the lowland area now occupied by the Great Lakes was drained by normal river systems. The present Great Lakes owe their origin to glaciation. Where Lake Erie now drains into Lake Ontario via the Niagara River, waters flow over an escarpment of Silurian rocks (441-410 million years old) giving rise to Niagara Falls and the downstream Niagara gorge. Farther east the waters drain from Lake Ontario into the St Lawrence River, where, in the picturesque Thousand Islands stretch, the headward-cutting river has scoured an irregular Precambrian rock plain (an erosion surface over 544 million years old).

With its extensive coastline and many rivers and lakes, Canada has its share of deltaic landforms, eg, the deltas of the Mackenzie, Fraser and Red rivers (Lake Winnipeg).

Modern quantitative geomorphology considers fluvial landforms in an open-systems context. The fundamental unit, the drainage basin, is considered an open system with inputs (eg, rainfall, solar energy), throughputs and outputs (river flow, sediment) of energy and matter. The morphology of landforms within the basin develops as a process-response or internal adjustment to the varying inputs and outputs. This conceptual approach also involves the idea of systems equilibrium: if inputs and outputs remain appreciably constant, the morphology of the landscape should assume a time-independent form in which the ridges (of more resistant rock or structure) downwaste at the same rate as the river valleys.

Drainage-network analysis, first introduced by the American Robert E. Horton in 1945, is part of quantitative fluvial geomorphology. Networks can be considered under such headings as pattern (eg, dendritic, rectangular) and composition, the latter involving a study of mathematical relationships, eg, the concept of self-similarity of river fractals.

In the field of applied geomorphology, quantitative criteria for the comparison of riverscapes have also been devised for environmental impact assessments in connection with river development projects, reductions in contaminant transport, river conservation and "natural" channel design. Interpretation of the wide range of fluvial forms is important for the identification of desirable crossing locations for highways, pipelines and railways and for the prediction of bank stability and ice-jam locations. Finally, fluvial geomorphology has important implications for the exploration of placer deposits, and for water-management studies, flood control and river-basin management in general.