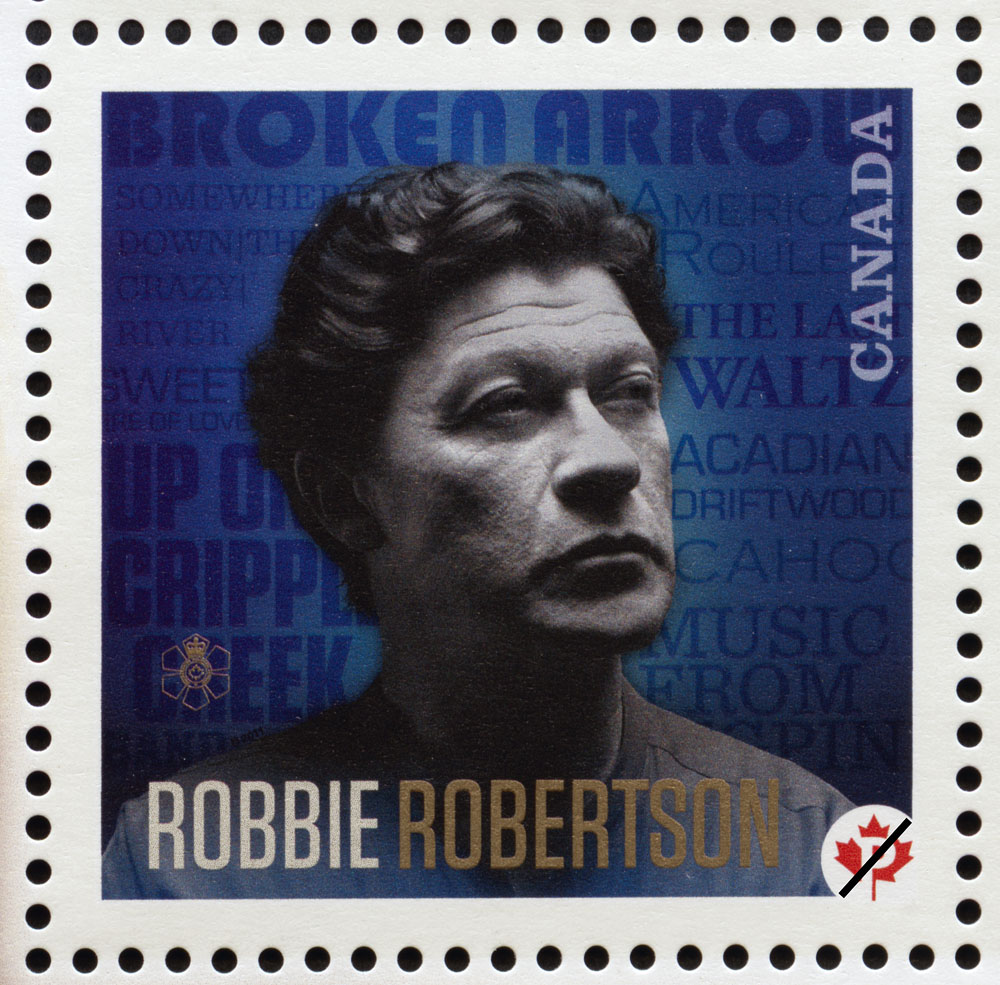 (Jamie) Robbie Robertson (b Klegerman). Guitarist, songwriter, singer, actor, producer, b Toronto 5 Jul 1943; of Mohawk and Jewish parents; honorary LLD (Queen's) 2003, honorary LLD (York) 2005. Robbie Robertson learned to play guitar while visiting the Six Nations Reserve near Brantford, Ont, as a boy. He turned to rock 'n' roll in his teens and joined Ronnie Hawkins' Hawks in 1960. He remained with The Hawks after they left Hawkins in 1965, relocated in the US, and continued 1968-76 as The Band. For The Band, Robertson wrote such classic songs as "The Weight," "The Night They Drove Old Dixie Down," "Up on Cripple Creek," "Rag Mama Rag," "Chest Fever," "Stage Fright," and "The Shape I'm In." Robertson, whose stinging, violently lyrical style brought him recognition as one of the premier guitarists in rock during this period, also appeared (without The Band) on Bob Dylan's Blonde on Blonde (Col C2S-841) and John Hammond's I Can Tell (Atlantic 8152) in 1965 and produced and played on Jesse Winchester's debut album in 1970.

Although regarded as The Band's creative force, Robbie Robertson did not participate in the group's various revivals during the 1980s. Based in Malibu, Cal, he worked instead in film - eg, producing, acting in, and composing music for the feature Carny (1980; soundtrack LP, Warner XHS-3455) and serving as music producer for Raging Bull, The King of Comedy, The Color of Money, and The Gangs of New York. In 1987 he released the LP Robbie Robertson (Geffen XGHS-24160), co-produced with Daniel Lanois. The album, whose lyric and musical imagery evoked Robertson's maternal Iroquois ancestry, included such songs as "Showdown at Big Sky" and "Somewhere Down the Crazy River," which were popular in 1988. It brought Robertson a (US) Grammy nomination in 1988 for best male rock vocal and Juno awards in 1989 for album of the year, as male vocalist, and (with Lanois) producer of the year. Canadian sales exceeded 200,000. A second album, Storyville (Geffen GEFD-24303), was issued in 1991; it received two Grammy nominations.

Robbie Robertson explored Aboriginal music in his next two recording efforts. Music for "The Native Americans" (EMI 1994), a collaboration with Kashtin and other Aboriginal musicians, served as the soundtrack to a PBS television documentary and sold over 75,000 units in Canada. The album earned Robertson a Juno award as best producer. Contact from the Underworld of Redboy (Capitol 1998) likewise earned him another Juno award, as well as a Native American Music Award in 1999. These recordings have been credited with helping Aboriginal music gain mainstream acceptance and peer recognition.

Robertson's songs, decribed by Jay Cocks as "small chapters of freshly minted American mythology, lyric and funny, funky and mysterious," have also been recorded by Joan Baez, Eric Clapton, Jackie DeShannon, Aretha Franklin, Ronnie Hawkins, Emmy Lou Harris (who used "Evangeline" as the title song of an LP in 1981), Diana Ross and the Supremes, and others.

Robbie Robertson joined DreamWorks Records as an executive in 2000. He oversaw the anniversary reissue of The Last Waltz. Robertson received lifetime achievement awards from the National Academy of Songwriters (1997), at the Native American Music Awards (1998), at the Aboriginal Achievement Awards (2003), and from the Governor General of Canada (Performing Arts Award, 2006). Robertson was inducted into the Canadian Songwriters Hall of Fame in 2011. He has been featured on CBC TV's Life and Times (2001) and in the PBS documentary Making a Noise.

Everett-Green, Robert."Still waltzing: Robbie Robertson got turned on to music on a Mohawk reserve," Globe and Mail, 1 Mar 2003

Behind the Music: Robbie Robertson. VH 1