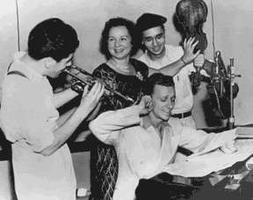 Robert Joseph Farnon, composer, arranger, conductor (b at Toronto 24 July 1917). He is considered one of the most influential film composers of his generation in Europe and North America. Farnon became trumpeter in several 1930s Toronto dance bands and in the Canadian Radio Broadcasting Commission's orchestras of Percy FAITH and Geoffrey WADDINGTON. He was a founding member of CBC Radio's "Happy Gang", 1937-43.

After serving overseas during WWII as conductor of the Canadian Band of the Allied Expeditionary Forces, Farnon settled permanently in Great Britain and built a solid reputation as orchestral conductor, arranger and composer of light music through a series of BBC radio programs and recordings for Chappell and Company Mood Music. His arrangements have been recorded by such well-known performers as Vera Lynn, Lena Horne, Frank Sinatra, Tony Bennett, and George Shearing. In 1995, Farnon received a Grammy award for Best Instrumental Arrangement (for trombonist J.J. Johnson). As well as more than 40 film scores, Farnon's compositions include the popular suite Canadian Impressions and Rhapsody for violin and orchestra (recorded by Steven STARYK).

In 1997 the National Arts Centre Orchestra paid tribute to Farnon, one of Canada's great musicians, in a three-day celebration of his work.