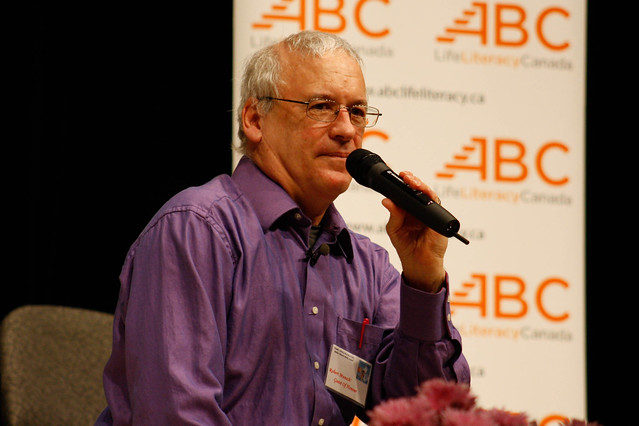 Robert Munsch grew up the fourth of nine children in Pittsburgh, Pennsylvania. By his own admission, he was a terrible student and a perpetual child. “My mother says I never grew up and still act like I was six years old,” he once said. “She may be right, but I figure that I act like a very mature six-year-old.” He has also admitted that, “I never learned how to spell, graduated from eighth grade counting on my fingers to do simple addition, and in general was not a resounding academic success. I did, however, all through elementary school, write poetry. Funny poems, silly poems, all sorts of poems. Nobody thought that was very important, including me.”

Munsch spent seven years in seminary school preparing to become a Jesuit priest. During that time, he also earned a BA in History at Fordham University and an MA in Anthropology at Boston University. He worked part-time at nursery schools and daycare centres, and after leaving the Jesuits he completed a master’s degree in Child Studies at Tufts University. As he once explained, “when I left the Jesuits, I decided to work in daycare for a year till I figured out what I wanted to do; and what I figured out I wanted to do was: work in daycare.”

Munsch started telling stories to his preschoolers in 1972. In 1975, Munsch and his wife, also a daycare worker, moved to Canada to join the Family Studies Department at the University of Guelph. Impressed with his stories and storytelling abilities, his colleagues encouraged him to write and publish them. He submitted his first written story, Mud Puddle, to ten publishers. It was rejected by nine but was published by Annick Press (which became his long-time publisher) in 1979. Mud Puddle sold 3,000 copies in its first year. By the early 1980s, Munsch had quit his job as a daycare worker to focus on his writing.

Very much an oral storyteller, Munsch makes up most of his stories in front of children. He often bases a story on a child’s own experiences and names the main character after him or her. For example, he made up Moira’s Birthday (1987), Makeup Mess (2001) and Smelly Socks (2004) on the same day in 1983. He then tweaks and reworks the stories over the course of many years before publishing them. He has even made changes to stories after they have been published. Mortimer (1983), the first story he ever made up, has about five different versions in publication.

Some of Munsch’s stories, such as Andrew’s Loose Tooth (1998), Pyjama Day! (2014) and Finding Christmas (2012) were inspired by his own family. Purple, Green and Yellow (1992) is about his struggles with depression. Love You Forever (1986), which has sold more than 20 million copies worldwide, began as a song that Munsch wrote to help him and his wife cope with their grief after they had two stillborn babies, one in 1979 and the other in 1980.

The widespread appeal of Robert Munsch’s stories — most of which have been illustrated by long-time collaborator Michael Martchenko — can be partly attributed to his attempts to empower his child characters. They tackle their ordinary and fantastic challenges with wit, bravery and invention. Canada’s multicultural population and broad geographic diversity are also well represented in his characters and settings. Many of Munsch’s books are studied in Children's Literature courses. The Paper Bag Princess (1980), for example, has been lauded as a feminist fairy tale and contemporary classic.

Munsch reportedly receives around 10,000 letters a year and has a very dedicated fanbase of “Munschkins.” He has frequently dropped in unannounced at schools and daycares, much to the delight of the children.

Munsch became a Canadian citizen in 1983 and lives in Guelph, Ontario, with his wife and their three adopted children. He suffered a stroke in 2008 that so interfered with his speech and memory that he has been unable to tour ever since. In 2010, he publicly discussed his recovery from alcohol and cocaine addiction, as well as his lifelong struggles with depression, obsessive compulsive disorder (OCD) and bipolar disorder. When prompted to provide a question he would like to be asked in an interview, he once replied, “How has being a manic-depressive, obsessive-compulsive, recovered-alcoholic nut case changed your writing?” 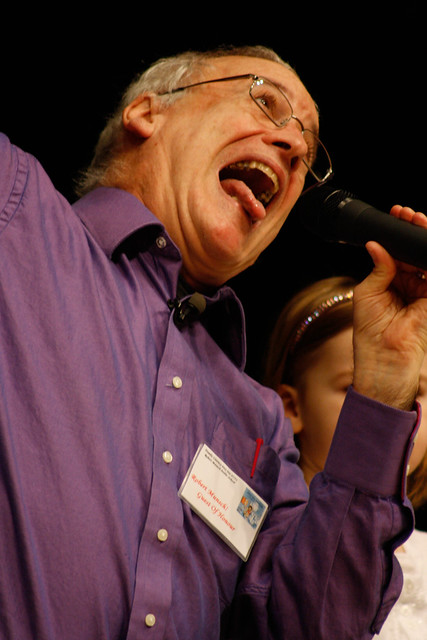 Robert Munsch, known for his hyperactive storytelling style, at Family Literacy Day in 2011.

Many of Munsch’s stories have been adapted for the stage, as both plays and musicals. A Bunch of Munsch (1991–92), an animated TV series based on his stories, was broadcast on CTV in Canada and Showtime in the US. Love You Forever was the basis for a musical composition by Marjan Mozetich. It was premiered by Toronto’s Quartetto Gelato in 2005. In 2010, Irene N. Watts published Munsch at Play: Eight Stage Adaptations for Young Performers. In 2017, the Young People’s Theatre in Toronto staged Munschtime!, an adaptation of several of Munsch’s stories.

Munsch received a Juno Award in 1985 for his recording Murmel, Murmel, Munsch: More Outrageous Stories (1985). His book Thomas' Snowsuit won the Ruth Schwartz Children’s Book Award in 1986. In 1992, he was named “Author of the Year” by the Canadian Booksellers’ Association. He was made a Member of the Order of Canada in 1999 and served as the first Honourary Chair for Family Literacy Day in January 2003. Elementary schools in Whitby and Mount Albert, Ontario, have been named in Munsch’s honour. He was inducted into Canada’s Walk of Fame in 2009.