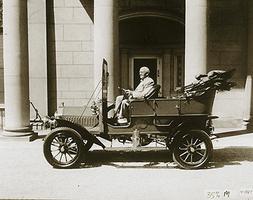 R.S. McLaughlin poses in front of his home in Oshawa with a 1908 McLaughlin Model F, one of the first automobiles made in Canada (courtesy General Motors of Canada Limited). 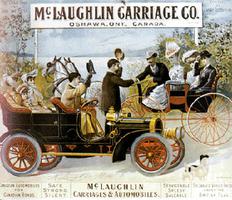 Robert Samuel McLaughlin, industrialist (b at Enniskillen, Ont 8 Sept 1871; d at Oshawa, Ont 6 Jan 1972). After a 3-year apprenticeship in the carriage business owned by his father, Robert McLaughlin, and work in similar establishments in New York, McLaughlin entered into partnership with his father and his brother George in the McLaughlin Carriage Works, Oshawa (1892). When fire destroyed the company's Oshawa factory (1899), 15 municipalities offered financial assistance for relocation near them, but the company stayed in Oshawa, in return for a $50 000 loan repayable "as convenient."

In 1908 McLaughlin began producing Buick car bodies for William Durant, owner of the Buick Motor Co in Flint, Michigan. When Durant moved on to Chevrolets, McLaughlin began producing them too (1915). The business was purchased by General Motors in 1918, and incorporated as GENERAL MOTORS OF CANADA, with McLaughlin as president. He also served as vice-president of the American parent. By the mid-1920s, the Oshawa plant had 3000 employees and produced more cars for the Canadian and Commonwealth market than the rest of the country combined. McLaughlin retired from active management in 1942, becoming chairman of the board, a position he held until 1967.

In recognition of his support for Canadian educational and medical facilities, including the McLaughlin Planetarium in Toronto, and his work in the Boy Scout movement, McLaughlin received honorary degrees from several Ontario universities. He was named a Companion of the Order of Canada in 1967.