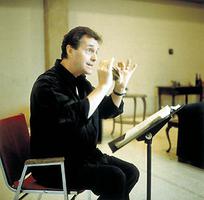 Robin Phillips, OC, director, actor, writer, designer, teacher(born 28 February 1942 in Haslemere, Surrey, UK; died 25 July 2015 in Lakeside, ON). An Officer of the Order of Canada and winner of the Governor General’s Performing Arts Award for Lifetime Achievement, Robin Phillips was regarded as an actors' director (he was known to ring a "perfection bell" in rehearsal for a moment of sublime acting). His stage productions marked by subtle cinematic realism, innovative attention to an extraordinary range of classical texts, and spare, muted design. Phillips will be remembered for sharing his remarkable vision in a way that manifested a new level of theatrical maturity in Canada.

Robin Phillips' acting and directing careers developed almost simultaneously. Trained at the Bristol Old Vic, he made his first professional appearances with the Theatre Royal in Bristol, playing Mr. Puff in The Critic, Konstantin in The Seagull, and Romeo, all in 1959–60, followed by seasons with the Chichester Festival and then the Oxford Playhouse.

Phillips also co-starred in such films as Decline and Fall... of a Birdwatcher and played the title role in David Copperfield. In addition, he made 30 appearances in such TV series as The Forsyte Saga, The Avengers and The Saint, all in the 1960s.

As early as 1961, Robin Phillips was an associate director of the Bristol Old Vic and in 1965 he was the assistant director of two productions for the Royal Shakespeare Company. By 1970, he was attracting attention as a director, staging Tiny Alice on the West End, and Abelard and Heloise in London, Los Angeles and New York.

In 1971, Phillips documented a memorable film version of his London production of Strindberg's Miss Julie, starring Helen Mirren. Major directorial appointments at Chichester and for the Royal Shakespeare Company followed, leading to his artistic directorship of Greenwich's Company Theatre (1973–75) and then of Canada's Stratford Shakespeare Festival (1975–80).

In 1981, Robin Phillips filmed Timothy Findley's award-winning novel The Wars. He returned briefly to acting in 1982, playing the title role in The Dresserat the Vancouver Playhouse. During the 1983–84 season, he ran London, Ontario's newly incorporated Grand Theatre, directing William Hutt in Timon of Athens and directing (for both stage and film) John Murrell's wartime drama of five women, Waiting for the Parade. Five other productions, all with notable flair, sustained financial losses. In 1984–85, he mounted four productions back in Chichester and a Theatre Calgary premiere of John Murrell's New World, and was associate director of the Lincoln Center in New York.

Return to Stratford and Soulpepper

In 1986–87, Robin Phillips made a triumphant return to the Stratford Festival, directing Cymbeline and The School for Scandal on the mainstage and making the Tom Patterson thrust stage very much his own with a quartet of elegant Shakespeare productions and the classic double bill of Oedipus Rex and The Critic. At Stratford, Phillips was a natural teacher; in 1987–88, he recruited a Young Company that won a Tyrone Guthrie Award designed to help them found an actual new company. The idea did indeed, 10 years later, evolve into Toronto's highly respected Soulpepper Theatre.

In 1988, Phillips was in Edmonton to launch the Citadel Theatre’s 25th anniversary season with Arthur Miller's The Crucible and Shakespeare's Midsummer Night's Dream, a pair of productions that he innovatively linked together in a theme of witchcraft. In 1990, he was appointed director general of the Citadel Theatre in Edmonton, where he stayed until 1995.

An interest in music was manifested in his 1991 inaugural Edmonton staging of Andrew Lloyd Webber's musical Aspects of Love, which toured to Toronto in 1992 and ran for six months at the Elgin Theatre, followed by a similar stand in Chicago and an American tour that extended its run into 1993.The Man from La Mancha, with its notable rape scene, was seen in Edmonton and in Toronto's Royal Alexandra Theatre (1992–93), followed by The Marriage of Figaro for the Canadian Opera Company later in 1993. With The Music Man (1994) and The Beggar's Opera (1995) completing his management in Edmonton, he returned to Toronto and The Canadian Opera Company in 1996 to adapt Beatrice and Benedict, and then, in 2000, to design and direct Verdi's Otello. Phillips also directed and designed Jekyll and Hyde (1996) for a small theatre in New York City. It ran for four years and garnered seven separate citations for direction and design, including the Drama Desk and NY People's Awards for 1997, and the Critics Circle for best director in 2001.

In 1998, Albert Schultz and the members of Phillips' Stratford Young Company lured him back to Toronto to be their mentor in the founding of the Soulpepper Theatre Company, and he directed their initial two productions at Harbourfront's Du Maurier Theatre —Schiller's Don Carlos and Molière's Misanthrope. He returned to Soulpepper in 2000 to direct the company's World Theatre Festival production of The Mill on the Floss.

In 2006, Phillips was in Ottawa at the NAC directing Stephen Ouimette in I Am My Own Wife, which was also seen at Canadian Stage Company in Toronto. In 2007, Phillips was back in Toronto delivering a stunning production of The Elephant Man, headlined by Brent Carver.

The University of Western Ontario awarded Robin Phillips a Doctor of Laws degree in 1983. In 2005, he was given the Order of Canada for his remarkable work in Canadian theatre, and in 2010 he received the Governor General's Performing Arts Award for Lifetime Achievement.