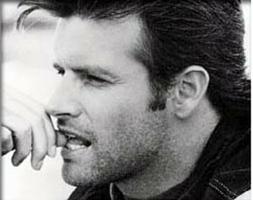 Voisine's album Double, released in 1990, made Voisine one of Europe's biggest pop stars.

Roch Voisine. Singer-songwriter, actor, radio and TV host (born 26 March 1963 in Edmundston, NB). He first pursued a career in hockey (with the Remparts in Quebec City) that came to an end when he hurt his knee at 18. He gave his first major show in 1986 on Canada Day. In the fall, Télévision Quatre Saisons asked him to host 'Top jeunesse', a variety show for teenagers, but it is essentially as Dany Ross in the CBC television series 'He Shoots, He Scores' that the general public came to know him.

In 1989, he recorded the LP Hélène (Star STR-8014), where the title song is a romantic ballad with acoustic guitar accompaniment. Within two years, it had sold over one million copies, most of them to female teenagers with whom Voisine has enjoyed exceptional popularity. He won Félix Awards for pop rock LP, most popular song, and as male performer and discovery of the year in 1989, as well as the Victoire trophy rewarding the best album in the French-speaking world in 1989 and 1990. His boxed set Double (1990, 2-Star STR-CD-8023) achieved a similar triumph.

In 1990, he became the first French-Canadian artist to do a four-night run at the Zénith in Paris. The following year, he launched a European tour (Germany, Italy, Great Britain) with two evenings at Bercy Stadium in Paris. Calling the show 'an absolute commercial and popular success,' Louis-Bernard Robitaille wrote in La Presse (Montreal, 27 Mar 1991): 'Coming from Quebec, we had known several popular singers, and even some headliners. With Roch Voisine, for the first time, we have a star. A real star. Of the kind that unleashes uncontrolled and simultaneous commotion in thousands of teenage girls'.