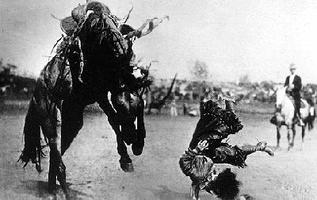 As a relief from the tough work of the range, the cowboys created their own games for their own amusement. These games developed naturally from the skills practised daily with horses, ropes and cattle (courtesy PAA). 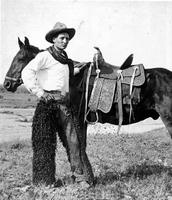 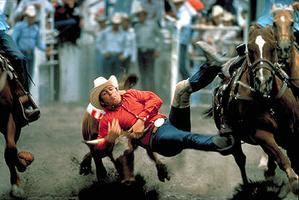 At the Calgary Stampede (photo by Joby Rankin). 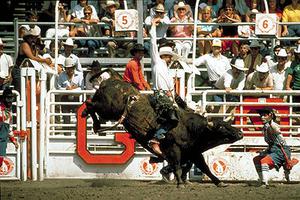 Rodeo means roundup, or the gathering of livestock (usually cattle or horses) to be counted, inspected and branded; as a sport it refers to the public spectacle in which the dynamic elements of a roundup are presented as a cowboy competition: bronc riding, bull riding, steer wrestling, calf and steer roping (with more recent additions such as barrel racing, chuckwagon racing and wild-cow milking), as seen in such annual events as the Calgary Stampede.

History
The name originates in the Spanish verb rodear, "to go around," or the Latin verb rotare, "to turn." Currently drawing spectators to cowboy contests coast to coast, the rodeo is generally associated with life "in the West," the first major official Canadian rodeo being assembled 2 Sept 1912 as "The Last and Best Great West Frontier Days Celebration" at Calgary. Rodeo in N America owes its origin to a variety of historical traditions and entertainment forms. In the 16th century, vaqueros, Mexican herdsmen, used la reata (rope), clothed themselves in chaperajos (leggings) and tended hardy Spanish cattle from the backs of wiry N African riding stock.

The 1847 diaries of travelling Irish military captain Mayne Reid provide perhaps the earliest rodeo documentation of vaqueros roping and throwing steers in the streets of Santa Fe, New Mexico Territory. These fiesta antics, transposed to cattle-driving communities such as Cheyenne (Wyoming Territory), Pecos City (Texas) and the pre-1900 ranches of what later became Alberta, fostered rodeo in its purest form.

In the Canadian West, broncobusting was considered sport at the Military Colonization Company ranch, and rope-throwing competitions were commonplace at the Fort Macleod Agricultural Fair in the 1880s. At the Walrond corral, John Ware is credited with some of the earliest exhibits of steer wrestling in 1892. The first Canadian rodeo was held in Raymond, Alta, in 1903. But it was not until the American show business phenomenon of the "Wild West Show" came to Canada in the early 1900s that spectators paid to see cowboy stunts.

Former American cowpuncher Guy Weadick is responsible for promoting Wild West Shows in Canada, and in 1908 took his idea for an annual frontier day celebration, "pioneer reunion" and cowboy competition for world championship titles to Calgary. With help from local politicians and businessmen, Weadick amassed over $100 000 for the first Calgary Stampede in 1912. It was a 6-day pageant and rodeo attracting more than 40 000 spectators a day, as well as legendary cowboys of the day - including some of Pancho Villa's bandits - in pursuit of $20 000 in prizes and world titles. WWI stalled the momentum of rodeo competition, but the Victory Stampede at Calgary (1919) revived cowboy contests in Canada permanently. Rodeo became an annual international event at Calgary in 1923 combined with an exhibition.

Rodeo's popularity sparked the growth of rodeo organizations in the 1930s, first with the Rodeo Assn of America (which represented primarily rodeo managers). In 1936, at an RAA rodeo in the Boston Gardens, Canadian and American cowboys broke the stranglehold that circuit managers had on rodeo purses when they staged a boycott; rodeo's first strike by professional cowboys succeeded in winning for competitors a greater percentage of the gate and precipitated the formation of the Professional Rodeo Cowboys' Assn in the US and the Canadian Rodeo Cowboys' Assn, founded 1944.

Despite periodic incursions to rearrange rodeo competition along team sport lines, the basic premise of individual human strength and precision against animal and clock has remained.

Bull Riding
Bull riding, pitting a rider's balance and stability against a one-ton Brahma bull's instinct to remove the cowboy from its back, officially entered rodeo competition in 1921.

Saddle-bronc Riding
Saddle-bronc riding dates back to a time when the livelihood of some working cowboys was bronco-busting.

Calf Roping
Calf roping is one rodeo event still practised on the ranch, but in the artificial setting of the rodeo arena it reaches near perfection; when a barrier in front of a horse and rider is released by a bolting calf, the contestant runs down the calf, throws it to the ground and ties any 3 feet; fastest time wins.

Steer Wrestling
The other timed rodeo event, steer wrestling (originally known as bulldogging), moved from the Wild West shows to the first rodeos as a cowboy's test of strength in bringing down a running steer by leaping from a moving horse, locking onto the steer's horns and twisting it to the ground; in the earliest rodeos, the bulldogger had to finish the manoeuvre by taking the steer's lower lip in his own teeth.

World Champions
While world championship titles in early rodeo were usually awarded to the winners of year-end competitions, such as the Pendleton Roundup in Oregon, the Cheyenne Frontier Days in Wyoming or the Calgary Stampede in Alberta, championships are currently determined by a cowboy's prize money accumulation at season's end; that is, at the National Finals Rodeo in Oklahoma City or the Canadian Finals Rodeo in Edmonton.