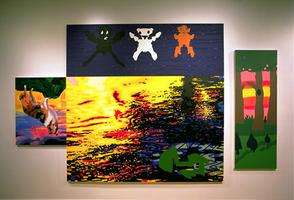 Ronald Benjamin Moppett, artist, teacher, curator, gallery director (b at Woking, Surrey, Eng 12 Mar 1945). Best known as a painter, Moppett has also been influential as a teacher and gallery director. Eldest of four children, he immigrated to Calgary with his family (1957). He graduated with honours from the Alberta College of Art and Design (1967) and received a scholarship to attend the Instituto de Allende in San Miguel Allende, Mexico (1968).

Since 1966, his work has been exhibited extensively in solo and group exhibitions in Canada and abroad. Notable exhibitions with publications include Ron Moppett, the Walter Phillips Gallery, Banff (1982); Curnoe/Ewen/Falk/Moppett, a touring exhibition organized by the MacKenzie Gallery, Regina (1982); Seven Artists from Alberta: Art from this Region, toured by the Alberta Foundation for the Arts to London, Brussels and Paris (1984); Ron Moppett, 49th Parallel Centre for Contemporary Art, New York (1988); and Painting Nature with a Mirror; Ron Moppett, 1974-1989, a travelling exhibition organized by the Glenbow Museum, Calgary (1990-91). His work is represented in many private, corporate and public collections such as those of the Alberta Foundation for the Arts, Cineplex-Odeon Corporation, Canada Council Art Bank, Edmonton Art Gallery, Glenbow Museum, Musée d'Art Contemporain, The National Gallery of Canada, Mackenzie Art Gallery and the University of Lethbridge. In 1997, he received the prestigious Gershon Iskowitz Prize in recognition of his significant contribution as an artist.

Moppett is a prolific artist whose work has been described as masterful, poetic and intelligent. His art is distinguished by the incorporation of signs and symbols which denote both personal experience and abstract concerns. His current work ranges from small- to large-scale multi-panel paintings which often include found objects or images.