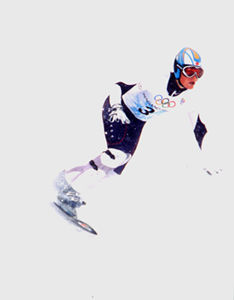 Ross Rebagliati on course to his Olympic gold medal performance in snowboarding at the Nagano games (courtesy Canadian Olympic Association/photo by Mike Ridewood). 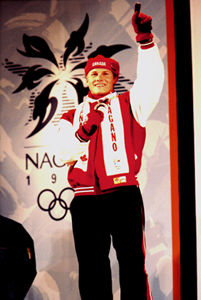 Ross Rebagliati with his Olympic gold medal for snowboarding at the 1998 Nagano games (courtesy Canadian Olympic Association/photo by Mike Ridewood). 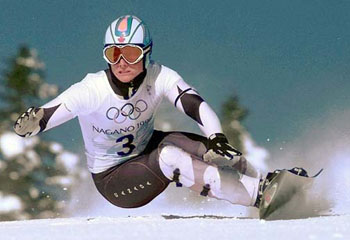 Snowboarder Ross Rebagliati won the first-ever Olympic gold medal in snowboarding at Nagano, Japan, on 8 Feb 1998, overcoming the fierce weather that came in during the first and second runs to edge out Italian Thomas Prugger in the giant slalom (courtesy Canadian Press Images).\r\n
PreviousNext

​Rebagliati began competing as a downhill skier, but took an interest in snowboarding and, at age 16, taught himself to snowboard. He turned professional in the 1991–92 season, winning the Canadian Amateur Snowboard Championship in 1991 and the US Open and European Championships in 1994. He won the world giant slalom title at Sestriere, Italy, in 1996, and in both 1996 and 1997 won the world super-giant slalom title at Whistler.

His crowning achievement was his Olympic gold medal at Nagano in 1998 in the first-ever snowboarding event held at a Winter Games. Because of his fearlessness and prior experience, he was able to overcome the fierce weather that came in during the first and second runs of the event.

However, three days later the International Olympic Committee (IOC) announced that Rebagliati had tested positive for marijuana and stripped him of his medal. Rebagliati adamantly insisted that he had not used marijuana since 1997 and had most likely been exposed to it secondhand during a party held for him by his friends prior to his departure for Nagano. The Canadian Olympic Association appealed the decision and, five days after he won the gold medal, Rebagliati was reinstated by the Court of Arbitration in Sport. Marijuana was a banned substance on the FIS (International Ski Federation) list, but not a banned substance on the IOC list. Since IOC is the governing body of the Olympics the medal was returned. Critics of snowboarding felt that such antics were to be expected from athletes in this new sport with its young following, and chastised the IOC for allowing the event into the Games. Others, however, chose to praise Rebagliati for his calmness under pressure and his unrelenting loyalty to his friends.

Rebagliati continued to compete after the 1998 games at Nagano but retired from competition shortly after the 1999–2000 season. He was inducted into the British Columbia Sports Hall of Fame and Museum in 2005.

Ross Rebagliati continues to promote his sport to youth in his current residence, Kelowna, British Columbia, and he supports numerous charities devoted to youth such as the Big Brothers of Greater Vancouver and the Kids Help Phone. In 2009, he published a history of snowboarding entitled Off the Chain. That same year, he accepted the nomination to become the federal Liberal Party candidate in the area of Okanagan-Coquihalla, but withdrew his candidacy in 2010. In 2013, Rebagliati founded Ross’ Gold, a medical marijuana business that promotes the medical and recreational use of marijuana for athletes.