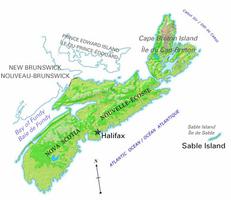 Sable Island, NS, is the only emergent part of the outer Continental Shelf of eastern North America. Sable Island is situated 177 km southeast of the STRAIT OF CANSO. The island's name derives from its sandy composition, being named Isola della rena on the first map of New France (about 1550) by Jacopo Gastaldi.

Shaped like an open crescent, 35 km long and 1.6 km wide at its widest point, it narrows at both ends to West and East Spits, which continue offshore as shallow submerged bars. The island stands on the broad Sable Island Bank of the SCOTIAN SHELF and consists of 2 parallel sand dune ridges separated by a discontinuous, linear depression. The northern dune ridge is the bulkier, rising to 26 m; the narrower southern ridge rises to 12 m.

Sable Island has been evolving as a barrier island during the past several thousand years of postglacial time as the sea has slowly risen over the Continental Shelf. Southerly storm waves have driven sands from the seabed onto the south shore. Currents related to the Gulf Stream cause a northeast drift of beach material along this shore, slowly extending the island in that direction. Along the northern shore, the Belle Isle current shifts sand more slowly southwestwards.

The dune ridges were built by winds behind the northern and southern beaches, but their continuity is broken by linear blowouts formed by intense northwesterly winter storms. A comparison of charts of the island made over the last 200 years shows that the northern and southern ridges were broken in the 1760s, and that after closure in the early 19th century, the central depression was occupied by a lake that has progressively shrunk in size as a result of drifting sand and plant colonization. Lake Wallace, 5.5 km long, is the present shallow remnant of this lake in the western part of the island. Marram grass or low shrub cover, except for extensive blowout areas in the east and west, stabilizes the dunes.

Natural fauna include terrestrial insects, freshwater aquatic life in Lake Wallace, birds and seals. Birds are mainly common sea and shore birds such as gulls and sandpipers, but the Ipswich SPARROW is unique to the island. Grey and harbour seals are present in the thousands, the grey being a permanent resident, the harbour seal a summer visitor. Numerous SABLE ISLAND HORSES still roam the island.

Never permanently settled, Sable Island has, however, seen temporary occupation by shipwrecked sailors, transported convicts, pirates and wreckers. The first recorded shipwreck was of one of Sir Humphrey GILBERT's ships in 1583. In 1598 the Marquis de La Roche landed 40 convict settlers on the island. Only 12 survived, to be rescued in 1603. Manned lighthouses were established in 1873 but have been automated since the 1960s. Canadian government weather- and navigation-station personnel comprise the only inhabitants, but visits are made by maintenance personnel, ecologists and geologists.

Exploratory drilling for oil and natural gas was undertaken here in the mid-1970s but has since been concentrated offshore. Large reserves of natural gas were found in 6 fields offshore, and in 1995 the Sable Offshore Energy Project was formed. In December 1999 natural gas began to flow through a submarine pipeline for Nova Scotia and New Brunswick consumption and for export to the US.

In 2011 an agreement was signed establishing Sable Island National Park Reserve. This designation prohibits drilling on Sable Island and to one nautical mile off its shore.