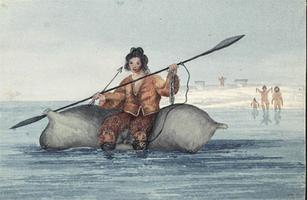 Sadlermiut Inuit, an extinct population from the three islands in Hudson Bay.\r\n

Sadlermiut were the inhabitants of three islands in Hudson Bay: Southampton (Salliq), Coats and Walrus. The original Sadlermiut were annihilated by disease in 1902-03. Their origins, population, development of culture and cause of their decline (from some 200 to 58), prior to their demise, are unknown. The present-day Sadlermiut came mostly from Aivilik (Repulse Bay) and Baffin Island, Nunavut and are not directly related to the earlier group.

Fragmentary excavations and the notes found in journals of explorers and whalers have excited considerable curiosity, as Sadlermiut, in appearance, behaviour, language and material culture, seem to have been significantly different from the relatively homogeneous peoples of the west coast of Hudson Bay.

Three hypotheses have been suggested to account for this: that Sadlermiut were direct descendants of Dorset peoples, who preceded the bearers of Thule culture in the area; that they were Thule whose culture developed idiosyncratically because it was isolated from the mainland Thule culture; and that they were carriers of Thule culture who were both isolated from the mainland and in contact with Dorset people, so that they and their culture derive from both roots, through intermarriage and cultural borrowing. This last hypothesis would account for the mixture of Dorset and Thule traits that characterize the archaeological remains of the Sadlermiut.

The Sadlermiut were isolated from the mainland Inuit; they lived for most of the year in stone and sod houses, and hunted seal, walrus, whales, polar bear and caribou, supplemented with fish and birds. Though they were in contact with whalers between 1860 and 1903, they were not as involved in whaling and trapping as the mainland Inuit.