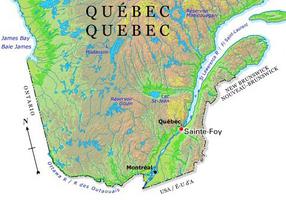 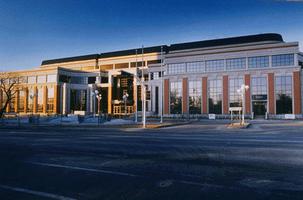 The origin of its toponym is uncertain and can be attributed to a variety of circumstances occurring between 1626 and 1669. The name may have originated from a Huron adolescent who was baptized in France around 1626 or 1627 with the name of Louys de Saincte-Foy. Alternately, it may have come from the presence of Pierre de Puiseaux, seigneur of Sainte-Foy, around 1637. There is one certainty - since 1678, the name Sainte-Foy was frequently used and the military papers of the war of 1759-60 used the name Sainte-Foy exclusively.

The Battle of Sainte-Foy occurred on 28 April 1760. It was the last victory that the franco-canadiennes had over the British. Since 1995 this battle has been officially commemorated in April of each year.

Demographically, the city has grown to 74 328 (1996). This active population has access to l'Université Laval and l'Université du Québec. There are two historical sites: The Maison Hamel-Bruneau, which serves as the cultural centre, and the Maison Routhier.

Sainte-Foy enjoys a geographically strategic position. The north and south banks of the St Lawrence River are connected by 2 bridges, the Québec and the Pierre-Laporte, making Sainte-Foy the entrance to the Québec region. Access to Sainte-Foy is also possible by the Jean-Lesage international airport, a railway station and an interurban bus terminal.

Its diversified economy has made Sainte-Foy one of the major poles of economic development. Expansion is occurring in its commercial and industrial sectors. The research industry is growing rapidly as a result of the growth of l'Université Laval and the establishments in the Parc technologique of metropolitan Québec.