The scouting movement was founded in England in 1907 by Robert Baden-Powell, then a lieutenant-general in the British army. Scouting came to Canada in early 1908 with three troops established almost simultaneously in Merrickville and St Catharines ON and Port Morien, NS, and in 1912 the Boy Scout Association was granted a royal charter throughout the Commonwealth by King George V. The Canadian General Council of the Boy Scout Association, incorporated 12 June 1914, was a branch of the Boy Scout Association until 30 October 1946 when it became an independent member of the Boy Scout World Conference. The name was changed to Boy Scouts of Canada and to Scouts Canada in 1976. Every governor general since Earl Grey in 1910 has been "Chief Scout."

Scouts Canada's stated mission is to contribute to the development of young people in achieving their full physical, intellectual, social and spiritual potential as individuals, as responsible citizens and as members of their communities. Scouts Canada is fully coeducational, with 5 programs including Beavers (for children aged 5-7 years); Cubs (8-10); Scouts (11-14); Venturers (14-17); and Rovers (young adults 17-26). Sponsors include churches, service clubs, professional and business associations, the Canadian Forces, etc.

The organization has publicly declared its commitment to provide a safe and secure experience for its members and has developed standards of training for its volunteers that ensure the achievement of those goals. Those training methods were reviewed and revised after criticism of its methods of handling abuse investigations were raised by the CBC's Fifth Estate examination of the issue in an investigative report in 2011. The organization determined that there was no systemic intent to hide abuse, though it did reveal that there had been cases that were not handled as rigorously as leaders would have liked and that they had handed their files over to police authorities. Scouts Canada apologized to former scouts affected by the abuse.

Scouts Canada currently has over 100 000 members reflecting every faith and culture. The organization is supported by the efforts of 25 000 volunteers with programming offered in more than 19 languages. 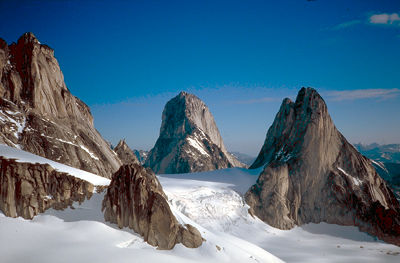