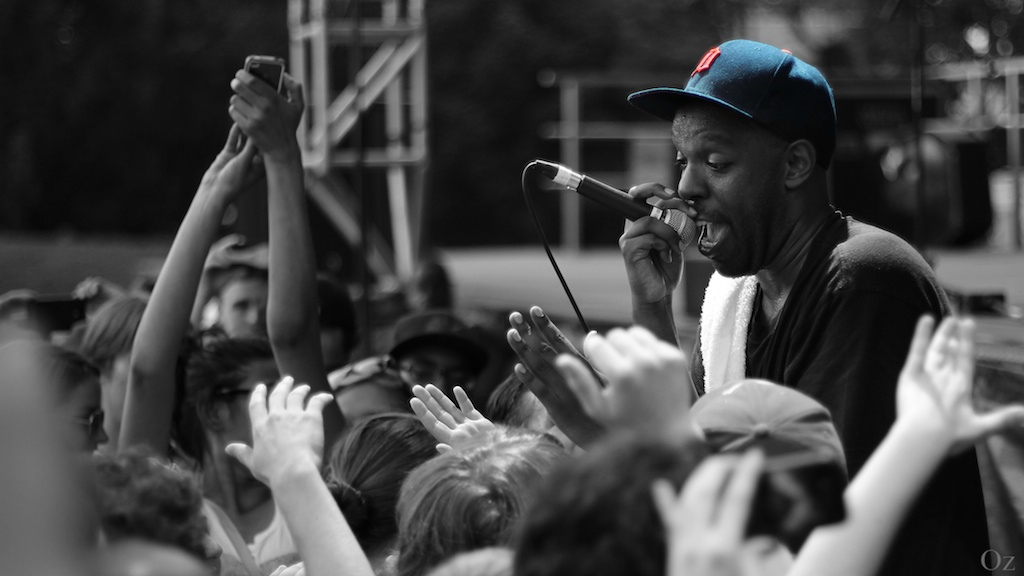 Shad was born in Kenya to Rwandan parents Bernadette and Francis Kabango. When he was about a year old, Shad and his family immigrated to London, Ontario, where his mother worked as a medical lab technologist and his father as a machinist.

Fluent in French and English, Shad attended Wilfrid Laurier University and graduated in 2005 with a degree in Business Administration. In 2004, he won first prize in the solo male category in the annual talent competition Rhythm of the Future. The contest was held by the Kitchener-Waterloo radio station 91.5 FM The Beat, and adjudicated by representatives from Universal Records and the Urban Music Association of Canada. Shad won $17,500 worth of recording time and resources, which he used to record his debut album, When This Is Over (2005), while completing the final year of his undergraduate degree.

When This Is Over was praised by fans and critics for its clever lyrics and unique musical style. Describing the album as “money well spent,” Exclaim! magazine called Shad “the rarest of rappers — one who is talented but humble.” A Sputnikmusic review hailed When This Is Over as “one of the best rap albums of the 2000s. A classic that belongs in every library.” Many listeners noted the unique combination of Shad playing acoustic guitar while rapping, a talent he showcased during his dynamic live shows. The song “I’ll Never Understand” features Shad’s mother reciting an original poem about the Rwandan genocide.

Following the success of When This Is Over, the Mississauga-based record label Black Box Recordings signed Shad to a three-album deal in 2007. In October of that year, they released his sophomore album, The Old Prince. Shad covered a number of topics on this album, including the challenges faced by Black youth (“Brother (Watching)”) and artistic integrity (“Compromise”). He also took a lighthearted look at the pains of living in an expensive world (“The Old Prince Still Lives at Home”).

The Old Prince was met with critical acclaim. Exclaim! magazine hailed it as a “fresh, ingenious record” and Consequence of Sound called it “a satisfactorily smooth listen.” In 2008, the album was nominated for Rap Recording of the Year at the Juno Awards and shortlisted for the Polaris Music Prize. In 2009, Shad won an Indie Award for Favourite Urban Artist.

The music video for the song “The Old Prince Still Lives at Home,” a spoof of the TV show The Fresh Prince of Bel Air, won the CBC Radio 3 Bucky Award for Best Video in 2008. In 2009, it was nominated for two MuchMusic Video Awards: MuchVIBE Hip Hop Video and VideoFACT Indie Video of the Year. Also in 2009, Shad received a shout-out from one of the biggest names in hip-hop when Kanye West posted the music video for Shad’s “Compromise” on his personal blog.

Shad’s third album TSOL (2010) featured collaborations with Broken Social Scene members Brendan Canning (“Lucky 1’s”) and Lisa Lobsinger (“Rose Garden”), and included a song produced by Canadian rapper Classified (“A Good Name”). “Rose Garden” proved to be Shad’s most popular song to date; it has more than one million streams on Spotify and its official music video has more than two million views on YouTube.

Pitchfork praised Shad’s performance on TSOL and called him “spiritual without being preachy, righteous without being self-righteous, and human without sounding mundane,” while Exclaim! ranked TSOL No. 2 on their list of Top Hip-Hop Albums of 2010. TSOL peaked at No. 24 on Billboard’s Canadian Albums Chart and was shortlisted for the 2010 Polaris Music Prize. In 2011, TSOL won Rap Recording of the Year at the Juno Awards, beating out Drake, who was favoured by many to win.

In 2011, Shad and Dallas Green released an original song called “Live Forever” and a remix of the TSOL song “Listen” under the name Shad and Dallas. In between touring and recording, Shad studied part-time at Simon Fraser University and graduated in 2011 with a master’s degree in Liberal Studies.

Leading up to the release of his fourth full-length album, Shad put out two EPs: Melancholy and the Infinite Shadness (2012) and The Spring Up (2013). On Melancholy, Shad sampled songs by such artists as Prince and Lenny Kravitz. The Spring Up is a collaborative EP with DJ Skratch Bastid. It features a track with Cadence Weapon and a song co-produced by DJ Jazzy Jeff.

In 2012, Shad represented the winning entry in CBC Radio’s Canada Reads competition: Carmen Aguirre’s memoir Something Fierce: Memoirs of a Revolutionary Daughter. In 2013, he co-hosted the Polaris Prize gala with Kathleen Edwards.

Shad’s fourth album, Flying Colours (2013),was nominated for Rap Recording of the Year at the Juno Awards and for the Polaris Music Prize. The album peaked at No. 36 on Billboard’s Heatseekers Albums chart and No. 9 on the Canadian Albums chart. The album included a version of Don McLean’s song “American Pie” (“Progress (Part 1: American Pie, Part 2: The Future is Here)”), a collaboration with Lisa Lobsinger and K-os (“Intro: Lost”), and a track with Lights (“Remember to Remember”). In their review of Flying Colours, Paste magazine hailed Shad as “Canada’s most talented, genuine musical artist and one of the industry’s finest poets.”


Adult Contempt (2016) and Other Projects

In July 2016, Shad dropped a surprise album titled Adult Contempt through the record label Arts & Crafts under the pseudonym Your Boy Tony Braxton. Adult Contempt draws inspiration from 1980s and 1990s soft rock and R&B and features Shad singing rather than rapping, an experiment that was met with mixed reviews. Regarding Adult Contempt, Chart Attack called Shad a “soft rock superstar” while NOW magazine described the record as “bland.”

On 28 October 2018, Shad released A Short Story About a War, a “concept record exploring humanity and violence.” The album’s release was accompanied by an art exhibit “exploring themes in Shad’s new album.” It was curated by Toronto rapper and community organizer Just John and held at Toronto’s The Tell gallery.

Describing Shad as “an artist whose positivity radiates through his music,” Erin Lowers of Exclaim! wrote that “A Short Story About a War isn't a one-listen album, but rather one with multiple layers that need to be peeled back to fully grasp its concept.” Mosi Reeves of Rolling Stone called Shad’s album “an intriguing slice of postmillennial agit-hop” that “is typical of his thought-provoking work.”

A Short Story About a War features collaborations with Kaytranada, A Tribe Called Red’s 2oolman and Lido Pimienta, among others. It was shortlisted for the 2019 Polaris Music Prize.

Following the dismissal of Jian Ghomeshi in October 2014, Shad hosted CBC Radio One’s flagship talk show Q (later rebranded as q) for a week-long stint in January 2015 as part of the audition process for a new host. During that time, Shad received some criticism from listeners for his use of the word dope during his interviews. But despite having no previous journalistic experience, he was hired as the new host of out of nearly 250 candidates.

Shad officially began as host in April 2015 and was met with more criticism from listeners and the media. In December, the Globe and Mail published an article titled “Q: Why is Shad so Bad?” that criticized Shad’s interview manner as “stilted and flat,” saying “he assiduously hews to a list of prepared questions and rarely follows up on anything his subjects say… Listening to Shad is an exercise in frustration.” By June 2016, q ratings were down approximately 28 per cent compared to June 2014, and some NPR affiliates in the United States had dropped the show from their programming.

In August 2016, CBC announced that Shad would no longer be the host of q, due to an audience survey showing that the program needed work. In a statement, Shad said that his “relationship with CBC remains strong” and that he was “grateful for an amazing experience.” Susan Marjetti, executive director of CBC Radio English Services, commented that the CBC and Shad were “both very open to exploring new possibilities that will really play to his many, many strengths.”