The Canadian Shield refers to the exposed portion of the continental crust underlying the majority of North America. The crust, also known as the North American Craton, extends from northern Mexico to Greenland and consists of hard rocks at least 1 billion years old. With the exception of the Canadian Shield, the rocks of the North American Craton are buried deep within the continent and covered by soil and other material. At 5 million km2, the Shield makes up roughly 50 per cent of Canada’s land mass. Shaped like a horseshoe — or the shields carried during hand-to-hand combat — the Canadian Shield extends from Labrador in the east to include nearly all of Québec, much of Ontario and Manitoba, the northern portion of Saskatchewan, the northeast corner of Alberta, much of the Northwest Territories and Nunavut and into the Arctic Archipelago. (It also reaches into parts of the United States, in New York, Wisconsin and Minnesota.) While at times a barrier to settlement, the Shield has also yielded great resources, including minerals, coniferous forests and the capacity for hydroelectric developments.

The Canadian Shield refers to the exposed portion of the continental crust underlying the majority of North America. The crust, also known as the North American Craton, extends from northern Mexico to Greenland and consists of hard rocks at least 1 billion years old. With the exception of the Canadian Shield, the rocks of the North American Craton are buried deep within the continent and covered by soil and other material. At 5 million km2, the Shield makes up roughly 50 per cent of Canada’s land mass. Shaped like a horseshoe — or the shields carried during hand-to-hand combat — the Canadian Shield extends from Labrador in the east to include nearly all of Québec, much of Ontario and Manitoba, the northern portion of Saskatchewan, the northeast corner of Alberta, much of the Northwest Territories and Nunavut and into the Arctic Archipelago. (It also reaches into parts of the United States, in New York, Wisconsin and Minnesota.) While at times a barrier to settlement, the Shield has also yielded great resources, including minerals, coniferous forests and the capacity for hydroelectric developments.(This is the full-length entry about the Canadian Shield. For a plain-language summary, please see Canadian Shield (Plain Language Summary).) 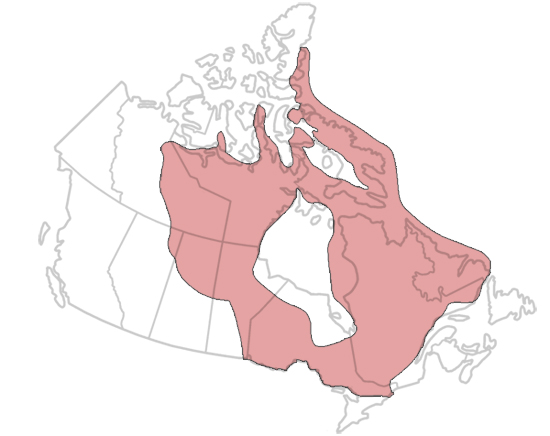 How Was the Canadian Shield Formed?

The Canadian Shield formed over 3 billion years through processes such as plate tectonics, erosion and glaciation. Plate tectonics refers to the movement and collision of the Earth’s outer crust. When these crustal plates collide they may weld together, forming larger landmasses.The Shield can be thought of as a jigsaw puzzle of different crustal blocks, sometimes known as “provinces,” welded together over time. Each block is bounded by a belt of younger rock created when the blocks collided.

When the earth deforms as a result of these collisions, geologists call the deformation process an “orogeny.” Orogenies cause the earth to thrust upward, creating mountain ranges.Because the Shield was formed through a series of orogenies, it was once a mountainous region. One of the largest of these mountain-making events was the Grenville Orogeny. Occurring about 1 billion years ago, the Grenville Orogeny created the GrenvilleMountain Range, stretching from Québec through Ontario and down the eastern side of the continent to Texas.Comparable to the present-day Himalayas in size, the Grenville Mountains may have been the largest mountain range ever created on Earth.

The mountains of the Canadian Shield were subsequently eroded by weather such as wind and rain. Comparable to sandpaper on wood, these forces slowly wore down the mountains, so that by about 800 million years ago, the low-relief surface of the Shieldhad been created. In the case of the Grenville Mountains, it’s estimated that tens of kilometres of rock may have been worn down.

These weathering processes were interrupted by a number of ice ages occurring over the last 2.5 million years. Like weather, as glaciers grow and move they also smooth the landscape,as well as move sediment. When they retreat, glaciers release the material they’ve been transporting and the deposited sediments become the origin of soils.

The most recent glaciation to affect the area was the Wisconsin glaciation that began around 110,000 years ago. During this glaciation, the Shield was covered by the Laurentide Ice Sheet, a giant expanse of ice as much as 3 km thick. As the ice retreatedfrom the southern part of present-day Canada — a process that began as recently as 11,000 years ago — it cut the basins of the Great Lakes as well as the thousands of lakesthroughout the Canadian Shield. 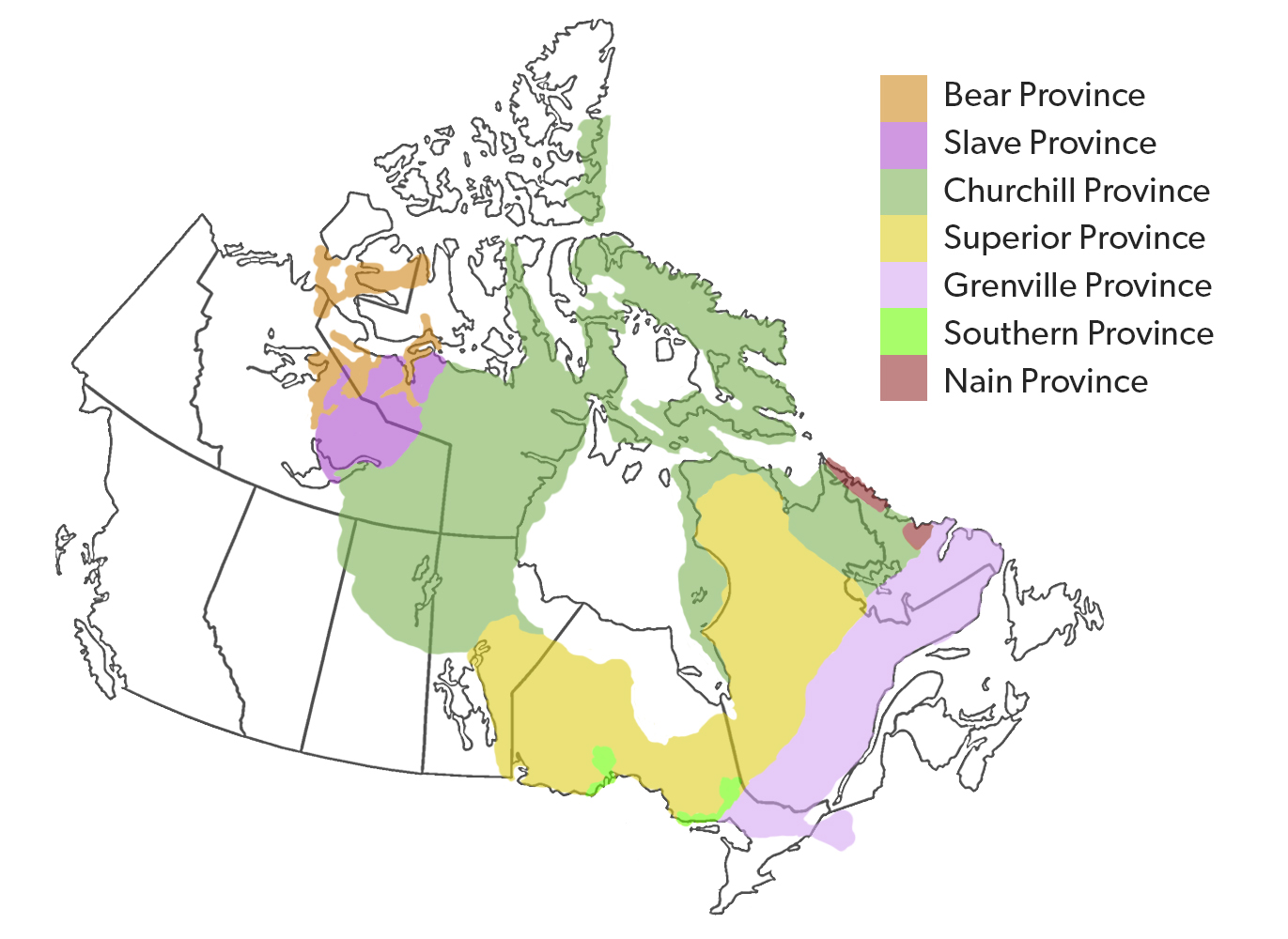 The Shield can be divided into seven geologically distinct regions sometimes referred to as provinces. They are the Nain, Grenville, Southern, Superior, Churchill, Slave and Bear provinces. Each is home to rock of different ages, types and formation characteristics, as well as different mineral deposits. The Southern Province, for example, is home to the mining district of Sudbury, Ontario, known for its production of copper and nickel. North of this region, the Superior Province is one of Canada’s most important sources of metals, including deposits of copper, gold, iron and silver. The Bear province includes deposits of copper and uranium, while the Slave province is being explored and mined for diamonds. The Churchill and Grenville provinces contain deposits of uranium, lead and zinc. Finally, the Nain province is the smallest of the seven regions, and is not a major mineral producer.

DID YOU KNOW?
The Canadian Shield contains some of the oldest rocks on Earth. In 2008, researchers estimated rock found on the northern shore of Hudson Bay, 40 km south of Inukjuak, to be 4.28 billion years old. Its age means the rock was created approximately 300million years after the formation of Earth. Previously, the oldest rocks in the world were thought to be southeast of Great Bear Lake, in the Northwest Territories. These rocks were estimated to be 4 billion years old. 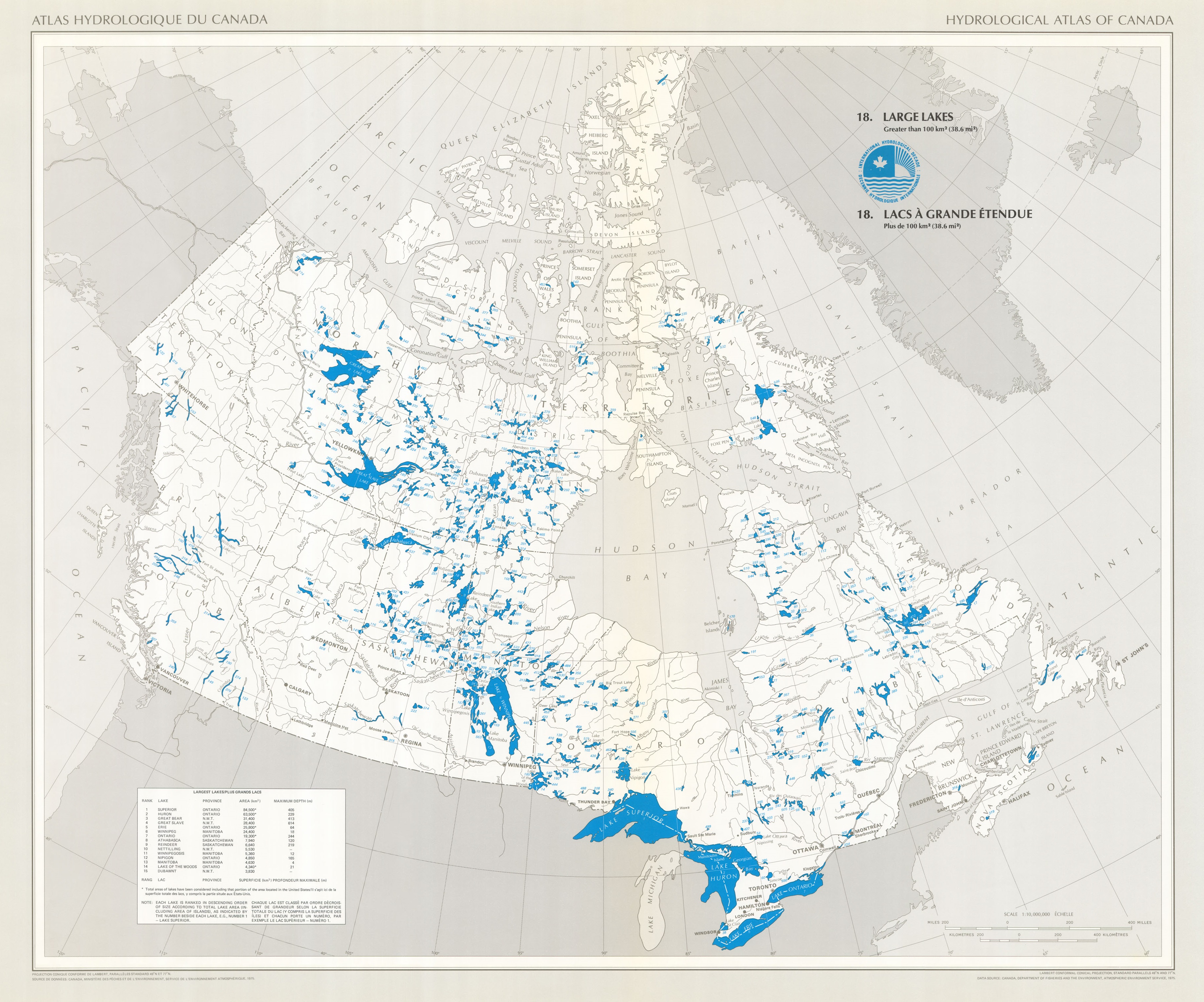 This map shows Canadian lakes that are larger than 100 square km. Note that lakes (in blue) form roughly the shape of the Canadian Shield. There are many thousands of lakes in the region.

The Canadian Shield’s most notable physical features are thousands of small lakes, thin layers of soil and rolling hills. Lakes are largely the result of glacial erosion during the last ice age. Other evidence of past glacial structures include striations (lines scraped into rocks) and drumlins (long hills of glacial sediment).

In addition to the thousands of small lakes throughout the Shield, the region also borders many of the larger lakes and waterways of Canada: the eastern shores of Great Bear Lake,Great Slave Lake, Lake Athabasca and Lake Winnipeg;the northern shores of Lake of the Woods, Lake Superior and Lake Huron;and the north shore of the St. Lawrence River. 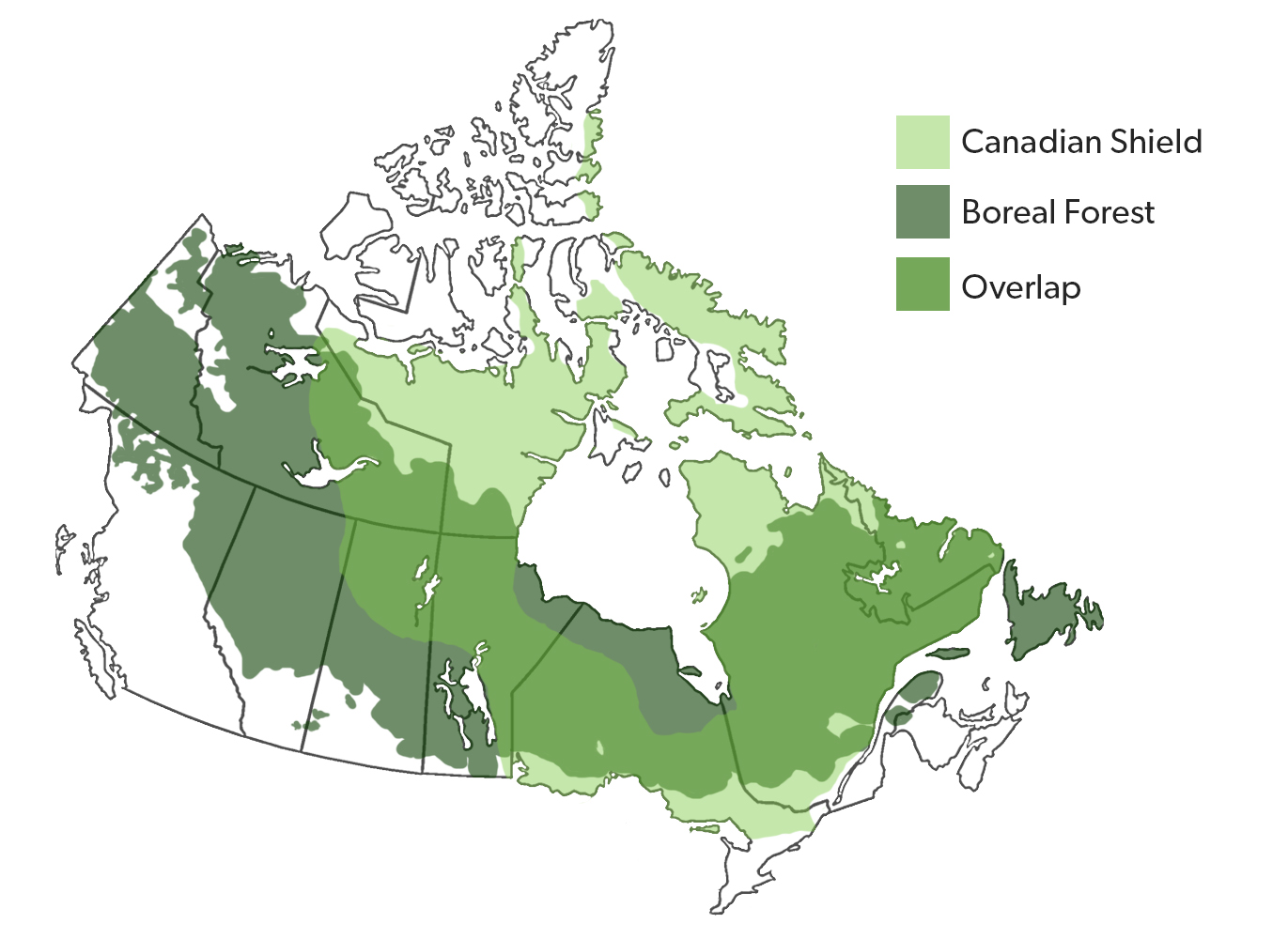 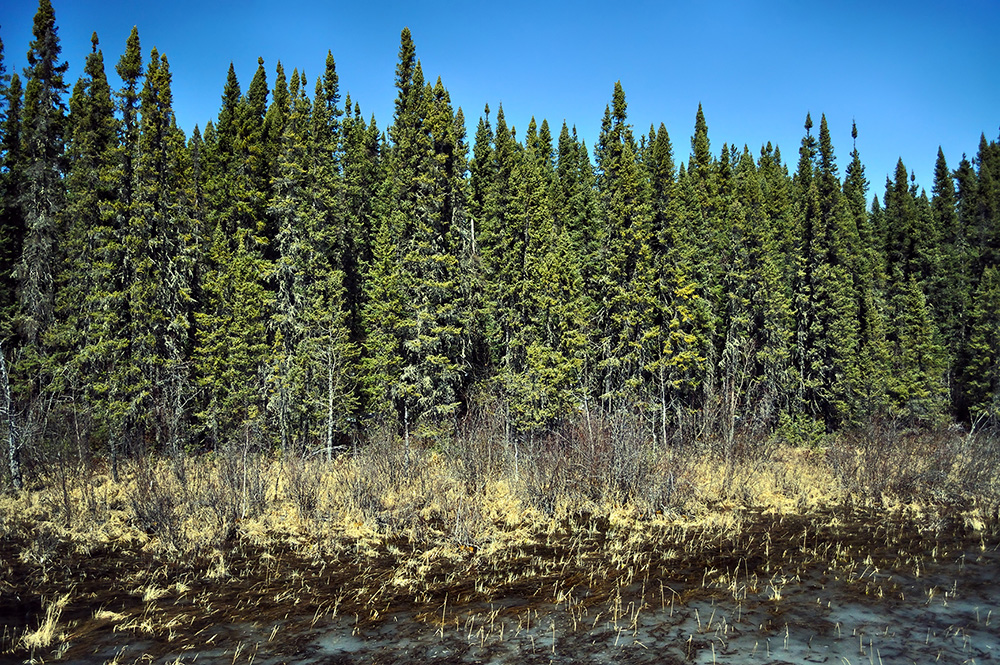 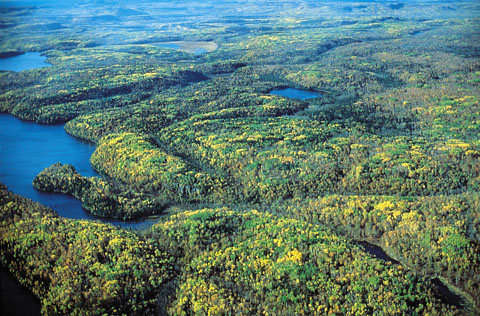 An aerial view of tamarack, aspen and spruce on a fall day in Northern Ontario.
PreviousNext

North of the boreal forest is the Arctic tundra ecozone, characterized by low-growing vegetation and few to no trees. Because most of the tundra is underlain by permafrost,vegetation is not able to put down deep roots, stunting growth. 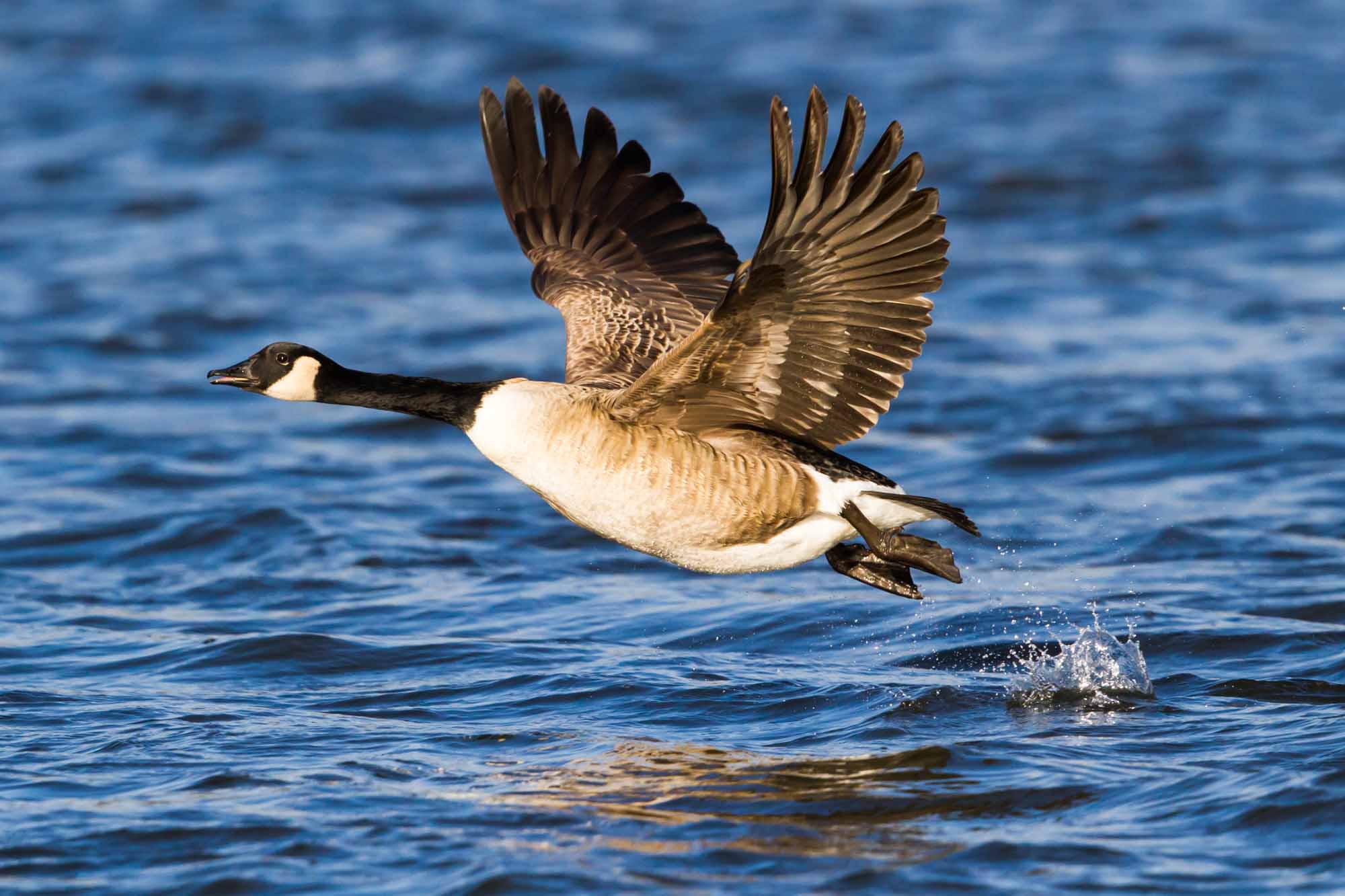 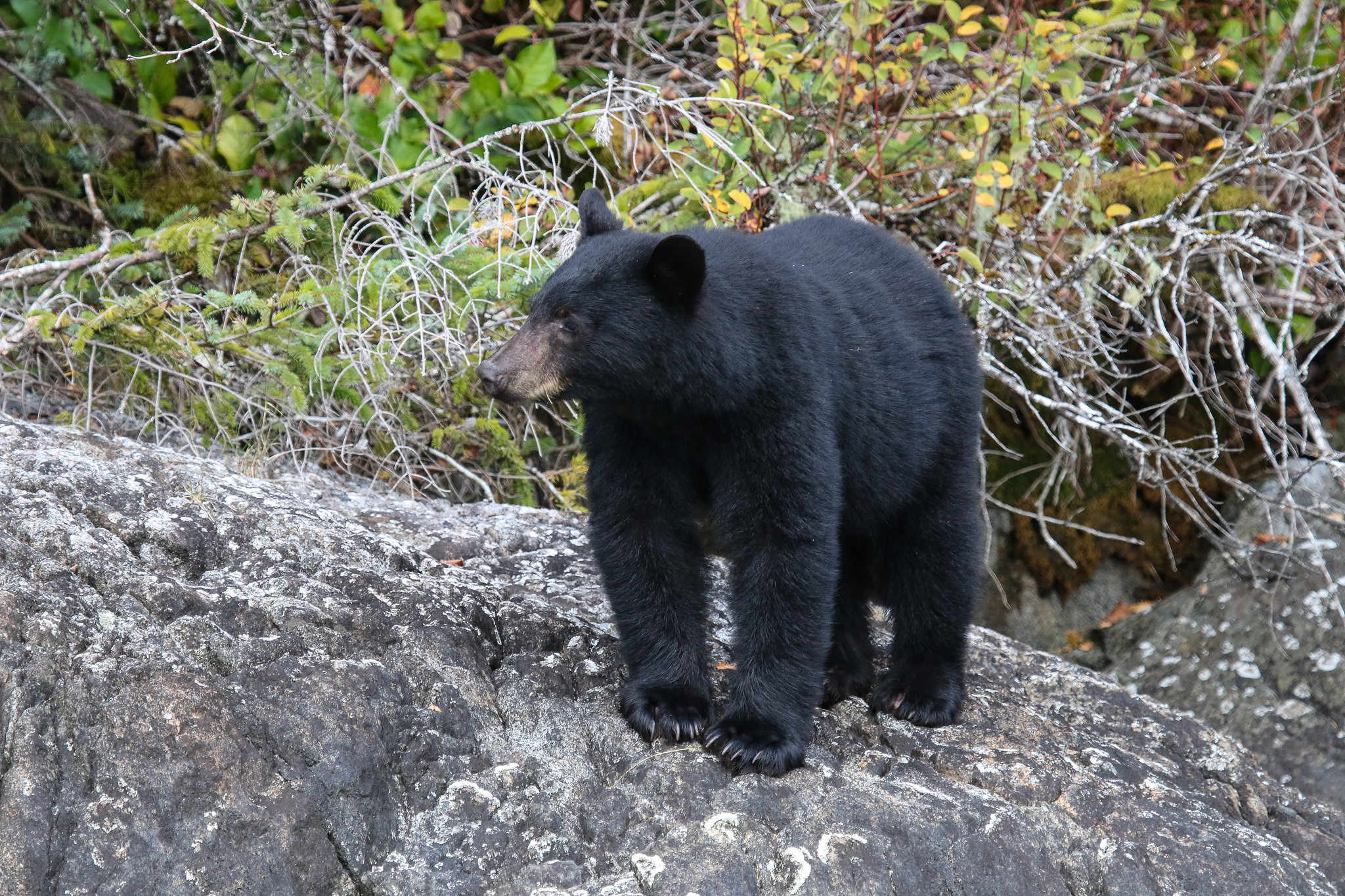 A wide range of wildlife calls the Canadian Shield home. Lakes and rivers in the south house a variety of fish species including trout, burbot and northern pike. In addition to fish, lakes are often spotted with a mix of waterfowl including wood ducks, Canada geese and American black ducks. Other birds include boreal owls , great horned owls, blue jays and white-throated sparrows, while mammals include caribou, deer, wolves, lynx, moose, black bears and beavers .

Moving north into the tundra, wildlife, like vegetation, becomes increasingly sparse. Animals in the Arctic portion of the Shield include polar bears, Arctic fox,Arctic hares, snowy owls and rock ptarmigan. 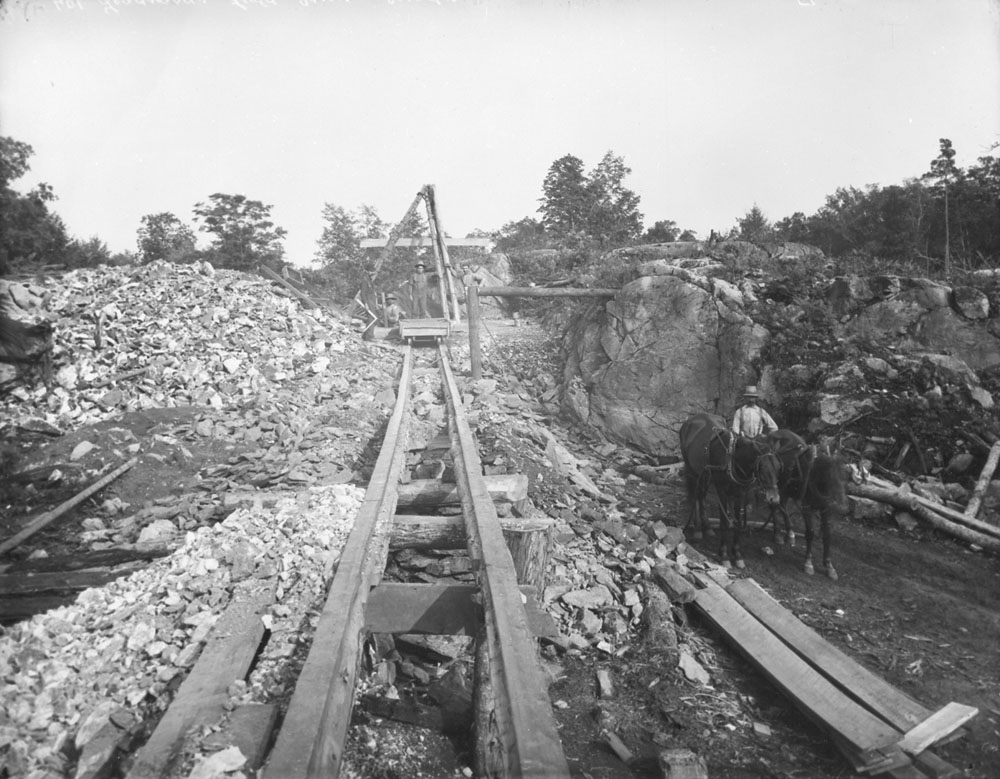 Ledyard's Gold Mine, in Madoc, Ontario. Gold was discovered in Madoc in 1866. 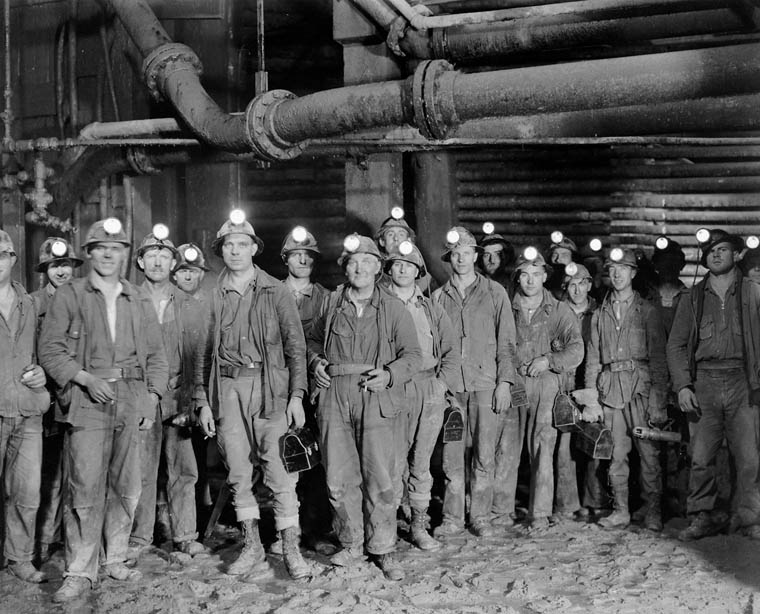 Over 540 m below the earth, miners wait for the cage to return to the surface of the Hollinger Mine in Timmins, Ontario, in 1936. 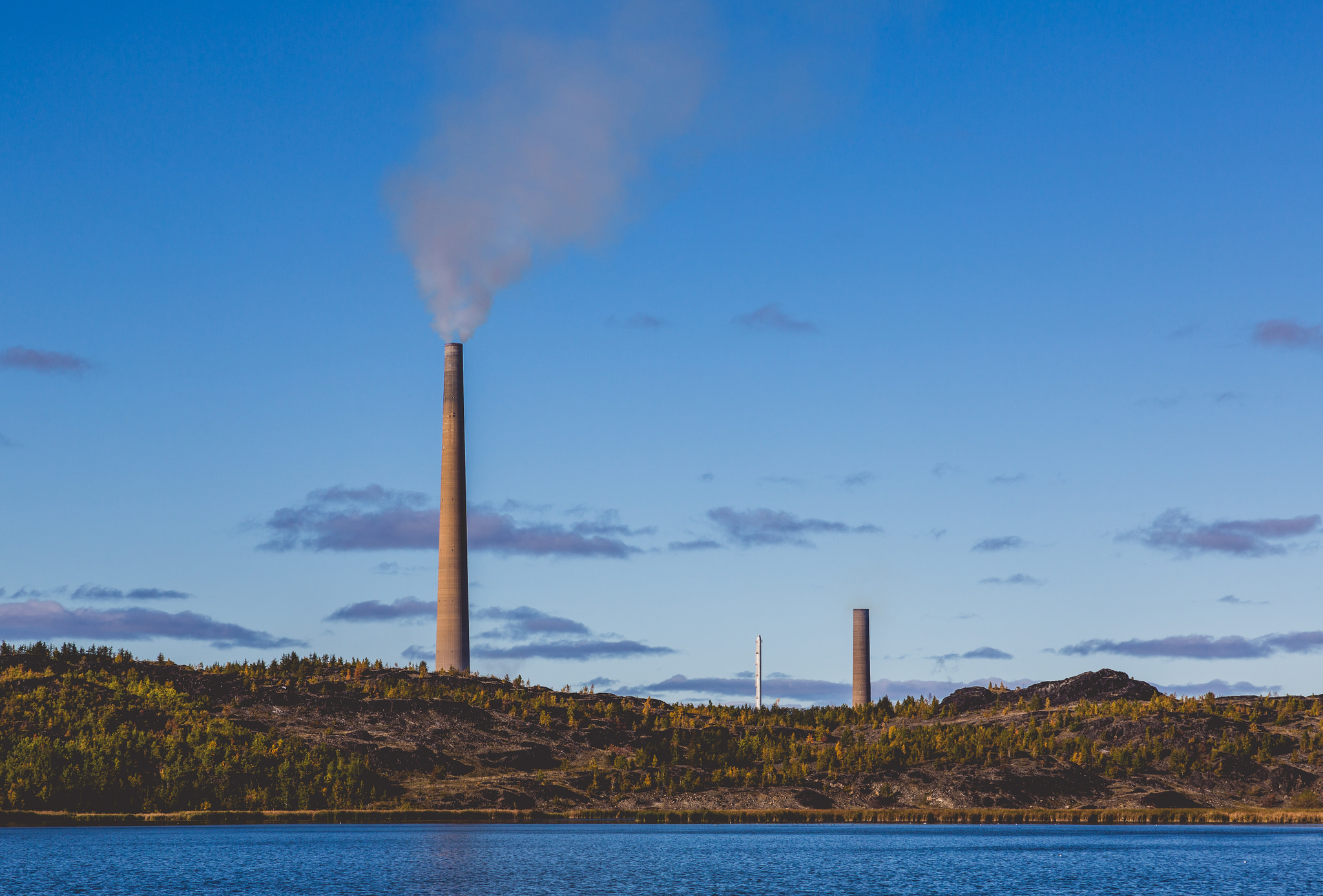 The Canadian Shield is rich in natural resources, including minerals, forests and freshwater. Mining began in the region in the mid-19th century and was key to Canada’s economic development. Various minerals and precious stones have been mined or continue to be mined on the Shield, including gold, silver, copper, zinc, nickel, iron, uranium and diamonds.

The first modern hard-rock mine in the Canadian Shield, near Madoc, Ontario, opened in 1866 after gold was found there. Substantial gold discoveries were also made in Ontario at Kirkland Lake in 1906 and Timmins in 1912, and in Québec at Rouyn-Noranda in 1920. Around the same time, silver was discovered near Cobalt , Ontario, in 1903. The town prospered during the silver rush of the early 20th century, before going into decline in the 1920s. While gold mines still operate near Kirkland Lake and Timmins, there are no longer any active mines in Colbalt or Rouyn-Noranda — a reality not uncommon for early mining towns.

Today, the largest concentration of active mines on the Shield — and in the world — is located around Sudbury, Ontario. Metals mined here include copper, nickel, gold andpalladium.

Kimberlites — formations where diamonds can be located — are scattered throughout the Shield, with the largest deposit located near Lac de Gras, Northwest Territories,about 300 km northeast of Yellowknife. Canada’s first diamond mine — called Ekati — opened there in 1998.

The Canadian Shield also contains iron ore, including deposits near Wawa, Ontario. Canada’s largest iron ore deposit, however, is known as the Labrador Trough or New Québec Orogen,and runs in a strip through northeastern Québec and western Labrador.

DID YOU KNOW?
Sudbury, Ontario, was hit by a meteorite about 1.85 billion years ago, creating a crater known as the Sudbury Structure. The basin is 60 km long and 30 km wide and home to the rich metal resources found in the area. Metals such as copper and nickel arethe result of the Earth’s crust melting after the meteorite hit.


Given the prominence of the boreal forest throughout the Canadian Shield, forestry is also a prominent industry. Many of the small towns and villages scattered throughout northernOntario and Québec were founded around pulp and paper mills and other forestry-related activities (e.g., Atikokan, Ontario).

Due to its numerous rivers, the Canadian Shield region produces a significant amount of hydroelectricity. Some of the highest producing hydroelectric dams include Churchill Falls,Labrador, and James Bay, Québec.

The Canadian Shield is the traditional territory of several Indigenous peoples. The Innu made their home on the Shield in what is now Québec and Labrador, while the Cree, Anishinaabeg and Métis occupied large swaths of the region through Québec, Ontario, Manitoba,Saskatchewan and Alberta. The traditional territory of the Dene and Inuit includes the sections of the Shield now covered by the Northwest Territories andNunavut. As Europeans began to settle and colonize the country, beavers found in the Shield region became a source for the fur trade (see also Exploration). Learning from Indigenous people, coureurs de bois, voyageurs and explorers used the birchbark canoe to travel and trade along the Shield’s many waterways. Later, beginning in the mid-1800s, railway construction meant blasting throughCanadian Shield rock, exposing valuable minerals in the process. While the bare rock, thin soils, muskeg and insects of the Shield made living there difficult, the development ofresource-based industries, such as mining and forestry, promoted increased settlement. Hydroelectric developments such as those at Churchill Falls, Labrador, James Bay,Québec, and Kettle Rapids, Manitoba, continue to feed electricity to urban centres in the south.

The historic mapping of this area was done by Alexander Murray, who, in 1851–52, examined the geology around the Gananoque, Ottawa and St. Lawrence rivers, as well as theperimeter of the Shield from Kingston to Lake Superior. (See also Geological Survey of Canada.)

Geography of Newfoundland and Labrador