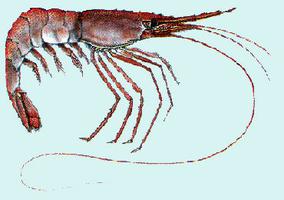 Shrimp differ from other decapods (crabs, crayfish and lobsters) in being adapted for swimming (artwork by Kendall Morris).

Shrimp are decapods ("10-footed") crustacean, differing from other decapods (crabs, crayfish, lobsters) in being adapted for swimming, a fact reflected in the large, laterally compressed abdomen and well-developed pleopods (pairs of swimming legs). All shrimp native to Canada are marine, although the large, freshwater Malaysian prawn (Macrobrachium) has been reared experimentally. In Canadian waters, there are more than 100 species of shrimp, of which 85 have been recorded off the Pacific coast. These vary considerably in size, ranging from less than 20 mm to well over 200 mm in length. Females are almost always larger than males; some species are protandric, ie, grow up and mature as males, then change into females for the balance of their reproductive lives.

The most valuable commercial species in Canada are the prawn (Pandalus platyceros) on the Pacific coast, and the pink shrimp (Pandalus borealis) on the Atlantic coast. Although the terms "shrimp" and "prawn" are used interchangeably in N America, a culinary distinction may be made between small shrimp and large prawns.