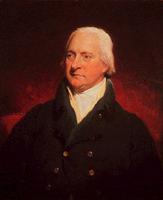 Simon McTavish, fur-trade merchant (b in Stratherrick, Scot c 1750; d at Montréal 6 July 1804). He immigrated to North America at age 13, probably as an apprentice to a merchant. After engaging in the fur trade out of Albany, New York, he moved to Montréal in the mid-1770s. He is not known to have travelled west of Lake Superior but he financed trading expeditions to the Saskatchewan River and the Northwest generally. In 1779 he was a key figure in the creation of the first NORTH WEST CO and he may have been behind the reorganization of 1783. After joining Joseph FROBISHER in 1787 to form McTavish, Frobisher and Co, chief outfitter and sales agent for the NWC, his control of the latter firm tightened. His pre-eminent position in Montréal business circles and his personal style were reflected in his nickname, "The Marquis."