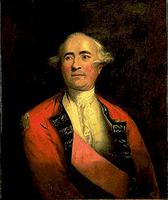 Sir Frederick Haldimand, army officer, governor (b at Yverdon, Swit 11 Aug 1718; d there 5 June 1791). As governor of Québec, Haldimand concentrated on defending the province militarily and the status quo politically. After service in Prussia and Holland, he transferred to the British army in 1756. He served in N America during the SEVEN YEARS' WAR, and after the CONQUEST of Canada he was twice military governor of Trois-Rivières. He was named Guy CARLETON's successor as governor of Québec in 1777, although Carleton remained in office until June 1778 when Haldimand finally arrived to take over. Haldimand's appointment lasted until 1786 but he was in the province only until 1784. He attempted to improve the province's defences and sent raiding parties against the American frontier. Politically, Haldimand agreed with the French party that the QUEBEC ACT represented the charter of government and rejected the English-speaking community's demands for English institutions. As the AMERICAN REVOLUTION ended, he was responsible for establishing the LOYALIST refugees in what is now Ontario, a task he carried out efficiently, and for reconciling the Six Nations to their resettlement in Canada.