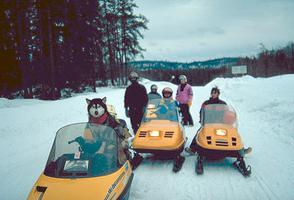 The explosion of snowmobiling brought serious concerns in the early years about noise, ecological damage and safety (courtesy Mike O'Conner).

After an initial growth in the sport of snowmobiling through the 1970s, participation and the sale of new snowmobiles fell off in the early 1980s. In recent years, however, snowmobiling participation has seen a dramatic increase in popularity with growth averaging 8-10% per year. In 1990 there were 429 689 registered snowmobiles in this country. By 2000 there were close to a million. The actual number of snowmobiles in use is much higher. The increase in popularity is largely due to advances in snowmobile technology and related clothing and equipment, and the development of a network of snowmobile trails. In Canada and the US (which together make up 90% of the world market for snowmobiling) there are an estimated 400 000 km of speically groomed and designated trails. Most snowmobilers today appreciate this "touring" aspect of the sport. In Canada, it is now possible to ride across the country on interconnected provincial snowmobile trains. In 1998, 14 Canadians snowmobiled from St Anthony, Nfld, to Squamish, BC. The more than 8000 km of trails that they followed are provincially established and maintained. Each province and territory has a non-profit organization that represents its separate clubs within the province. In most cases membership is required to use provincial trails, which are designed and maintained by individual clubs in conjunction with the province and private landholders.
×

Canada at the Olympic Winter Games