Stoney-Nakoda or îyârhe Nakodabi, "Rocky Mountain Sioux," are culturally and linguistically allied to the Plains Assiniboine, but in Saskatchewan and Montana are characterized by differences in language and culture. They speak the northern dialect of the Dakota language. Stoney oral tradition (see also Indigenous Oral Histories and Primary sources) asserts that their forefathers resided along the Rocky Mountain foothills from time immemorial.

Stoney-Nakoda or îyârhe Nakodabi, "Rocky Mountain Sioux," are culturally and linguistically allied to the Plains Assiniboine, but in Saskatchewan and Montana are characterized by differences in language and culture. They speak the northern dialect of the Dakota language. Stoney oral tradition (see also Indigenous Oral Histories and Primary sources) asserts that their forefathers resided along the Rocky Mountain foothills from time immemorial. 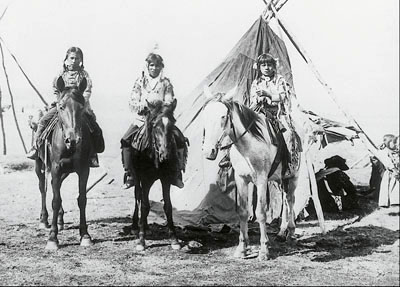 The first recorded story (cited in the Jesuit Relations) was that the Stoney-Assiniboine separated from the Dakota/Lakota Nation sometime before 1640. It is believed that they migrated westward with the Cree as the fur trade moved west along the Saskatchewan River trade routes.  Hudson's Bay Company employee Henry Kelsey travelled with Assiniboine-Stoney traders in 1670. The next recorded contact was made by trader Anthony Henday, who met Stoney-Assiniboine camps on his journey to Alberta in 1754. Father de Smet reported in 1840 that the Rocky Mountain Stoney separated from the Plains Assiniboine about 1790. However, de Smet might have been referring to groups such as the Bearspaw band, who have by oral accounts had a tradition of fleeing westward to escape devastating smallpox epidemics (see Epidemics in Canada).

The Stoney-Nakoda bands, commonly composed of extended families, lived and continue to live along Alberta's Rocky Mountain foothills from the headwaters of the Athabasca River south to Chief Mountain in Montana. These forest and foothill people hunted bison and other big game animals (see Buffalo Hunt). With the establishment of Edmonton House (1795) and Rocky Mountain House (1799), they traded furs, hides and fresh meat, and were invaluable guides to traders, explorers (Lord Southesk, John Palliser, James Hector), surveyors (Canadian Pacific Railway;  Geological Survey of Canada) and missionaries. They were introduced to Christianity by Methodist missionaries after 1840.

The Methodist Mission at Morleyville on the Bow River was established by Reverends George and John McDougall in 1873. The Stoney, led by Chiefs Jacob Bearspaw, John Chiniki (also Chiniquay) and Jacob Goodstoney, accepted Treaty 7 at Blackfoot Crossing in September 1877. The original reserve of 109 square miles was surveyed adjacent to the Morleyville mission in 1879. The Bearspaw and Wesley Nations later claimed additional reserve land to the south and north. After years of petitions and negotiations, both the Bighorn (Kiska Waptan) reserve (west of Nordegg) and the Eden Valley reserve (west of Longview) were established in 1948. Descendants of the Wood Stoney people also live on the Alexis and Paul reserves west of Edmonton, which were set aside under the provisions of Treaty 6 (1876).

The traditional way of life based on hunting, fishing and trapping along the Rocky Mountain foothills has been largely replaced by agricultural activity and mixed farming.

The economic base of the Stoney-Nakoda includes trapping, big-game hunting, guiding, ranching, lumbering, handicrafts, labouring and various professions. The Bearspaw, Chiniki, Stoney and Wesley Nations at Morley enjoy a high standard of living based on natural gas royalties and operate several commercial enterprises (such as stores, restaurants, service stations, a rodeo centre, a campground and the Nakoda Lodge). Their social life centres on family and cultural activities, including powwows, Treaty Days, rodeos, stampedes and camp meetings. Members of the four Nakoda Nations live at Morley, Bighorn, Eden Valley.  As of 2016, their population was over 3,700.