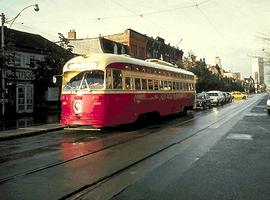 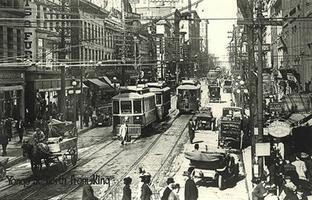 Street railways (also known as streetcars or trams) began operation in Canada during the era of horse-powered local TRANSPORTATION, expanded rapidly with electrification, shrank with a public policy switch in favour of rubber-tired vehicles, and recently re-emerged as light rail transit. With a simple, robust technology, street railways have had a profound impact on our society, not only as a transportation mode but also in the development of the electric-power industry and on the shaping of our cities.

The low rolling resistance of steel wheels on steel rails, plus the simple guidance mechanism offered by flanges, has made rail-bound transport attractive for a variety of applications. Montréal and Toronto were the first cities with horse-drawn tramcars in Canada, using systems incorporated in 1861 by Alexander Easton of Philadelphia. In spite of the need to substitute sleighs for the cars in winter, both operations did well. Toronto had 109 km of track, 361 trams and 100 sleighs at its peak. The Montréal network extended over 40 km, using 150 trams, 104 sleighs and 49 horse omnibuses. Other cities to establish such services included Hamilton, Winnipeg, Halifax and Saint John.

Railway lines between cities developed rapidly, moving to steam power and long trains. As cities grew, so did urban railways, which were characterized by smaller vehicles more appropriate for mingling with pedestrians and other street traffic. Steam and later cable traction systems were applied in some US cities but never caught on in Canada. The major breakthrough came with electric power in the 1880s, and here Canada was a leader. In 1884 the Toronto Industrial Exhibition (now CANADIAN NATIONAL EXHIBITION) offered railway service at the initiative of a local citizen, J.J. Wright. In 1885 this service was converted to trolley-pole operation, using the technique of Belgian inventor Charles J. Van Depoele.

As the technology matured, the typical system had tracks mounted flush with the pavement, current collection by trolley, and overhead wire supported by poles, often also used for lighting. Costs for both installation and operation were low, and streetcar services spread rapidly. Windsor, Ont, installed the first Canadian electric tram system in 1886. Vancouver followed in 1890, Winnipeg in 1891, Montréal, Hamilton and Toronto in 1892, Edmonton in 1908, Calgary in 1909 and Regina in 1911. By WWI, 48 Canadian cities and towns boasted streetcar systems.

The first intercity application of electric street railway technology was at St Catharines in 1887, with a line to Thorold, Ont, followed by construction of a 13-mile (20 km) interurban system between New Westminster and Vancouver in 1891. Some of these interurban lines were later overtaken by urban expansion and became part of city streetcar lines (eg, the Long Branch line in Toronto); others provided a right-of-way for eventual rapid transit construction (eg, Vancouver to New Westminster). In the 1930s the street railway industry responded to increased competition from automotive transport by developing lightweight, high-performance cars, best typified by the (US) Street Railway Presidents' Conference Car. Licensed for manufacture in Canada, these popular, comfortable machines were used in Vancouver, Montréal and Toronto. Toronto still uses them, but in other cities they gave way to the motorbus and trolleybus, which can operate on roads built at public expense, rather than requiring track provided by the transit system itself.

Technological changes came into play again during the 1970s and 1980s, with the use of trains of modern articulated cars (having several body sectors joined together by flexible joints) to provide transit service that has many of the characteristics of conventional "heavy" rapid transit with lower costs. Capable of running on city streets, Light Rail Transit services are reinstating the street railway. Edmonton opened the first all-new LRT service in N America in 1978, using a combination of subway and freight railway alignments. In 1981 Calgary followed, combining a new streetcar operation downtown, with short tunnel sections, roadside alignments and a freight railway line. A second line, opened in 1985, made extensive use of central medians of major roadways. The success of these installations has inspired plans for LRT lines in Toronto and Vancouver and in a number of western US cities.

Transit systems were the first major consumer of electricity and promoted the use of electricity for other purposes, such as lighting. Many electric-power companies began life as streetcar companies, eg, those of Winnipeg, Montréal, Québec City, Saint John, Halifax, Victoria and Vancouver. Some power companies operated transit systems into the 1970s: Nova Scotia Light and Power ran motorbuses and trolleybuses until 1969, and BC Hydro in Vancouver and Victoria until 1978.

Electric street railways produced a revolution in social and political life. The low price and widespread availability of streetcar service meant that for the first time people could gather en masse from all over a city and, in an era preceding radio or widespread telephones, have a major impact on political responsiveness and institutions. Streetcars also had a major impact on the shape of cities. "Streetcar suburbs" offered an entirely new way of life for Canadians, providing access to urban amenities while at the same time permitting relatively low-density housing, yet avoiding the major sprawl often associated with later auto-dominated suburbs.