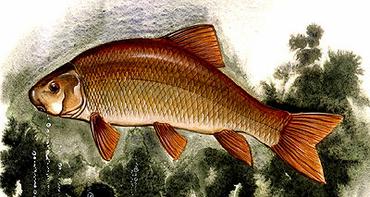 Most species of sucker feed on small, bottom-dwelling organisms which are sucked up, giving rise to the common name (artwork by Jan Sovak, 1989).

Sucker, freshwater fishes of the family Catostomidae, and closely related to minnows. There are about 13 genera and 72 species of suckers; most occur in North America but one extends into eastern Siberia and another occurs only in China. There are 7 genera and 18 species in Canada (and additional fossil species); none are found in Newfoundland or Vancouver Island. Longnose and white suckers have the largest distribution, in lakes and rivers from the Maritimes to British Columbia. The longnose sucker even extends north to near the arctic coastline. The family also includes quillbacks (carplike fishes) and redhorses (which can have reddish fins).

Very few suckers exceed 40 cm in length. Most species have a ventral mouth (located on lower body surface) with large lips covered with papillae (small, nipple-shaped protuberances). Most species feed primarily on small, bottom-dwelling organisms, which are sucked up (giving rise to the common name).

Suckers, unfortunately often regarded as coarse fish, are rarely fished commercially or recreationally in Canada, although they occur in large numbers and can be readily taken. Their common name, with its connotations, probably does not help make these fishes more acceptable than they are for fishing and eating. Although bony, they are eaten occasionally (sometimes misleadingly marketed as "mullet") and are used for dog food. Suckers are important in the diets of many other fish. They may compete with salmonids, but the extent is not well known and is probably exaggerated.