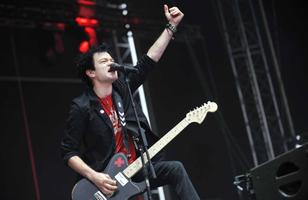 Sum 41's four members were still in high school when they formed the band, but their music, energetic performances and overall irreverence eventually landed them deals with EMI Music Publishing Canada, Aquarius Records (for Canada) and Island Records (for the rest of the world). An introductory 2000 record titled Half Hour of Power was produced by former Treble Charger member Greig Nori (who also became the group's manager) and caught attention with the single "Makes No Difference." It sold 50,000 copies to be certified gold in Canada. It established Sum 41 as a band that could effectively mix pop-punk with rock and hints of heavy metal and rap. It earned a Juno Award nomination for best new group.

That set the stage for the 2001 All Killer No Filler breakthrough, which was produced by Jerry Finn (Rancid, Blink-182) and included the hits "In Too Deep," "Fat Lip," "Motivation" and "Handle This." The first two tracks also established Sum 41 as a video-friendly band, which increased its exposure around the globe. The album was certified triple-platinum in Canada, double-platinum in the United States and United Kingdom, platinum in Ireland and Japan, and gold in France, Indonesia and Australia. All Killer No Filler received Juno nominations for best album and best rock album, while Sum 41 got an award for best group.

Sum 41 kept the momentum rolling with 2002's harder-edged, Nori-produced Does This Look Infected?, which included the hits "Still Waiting," "Over My Head (Better Off Dead)" and "The Hell Song." It included a bonus DVD titled Cross the T's and Gouge Your I's that featured clips from the group's alter ego parody metal band, Pain for Pleasure. Sum 41 received the 2003 Juno for group of the year while Does This Look Infected? received a rock album nomination a year later. It was supported by extensive touring that helped it achieve platinum status in Canada and Japan, and gold in the US, UK, France, Indonesia and Australia. A five-song live EP and DVD titled Does This Look Infected Too? was released in 2003.

Chuck came out in 2004 and was titled in honour of Canadian peacekeeper Chuck Pelletier, who helped evacuate Sum 41 when they were in the Democratic Republic of Congo with the War Child charity and were caught in a gun battle. The trip resulted in a documentary called Rocked: Sum 41 In The Congo, which showed the devastating effects of the country's longstanding civil war. Chuck showed more breadth than previous records, revealing Sum 41 at its heaviest while also introducing cello, piano and acoustic guitar. Chuck included the singles "We're All To Blame," "Some Say," "No Reason" and "Pieces," which was a number one rock radio hit in Canada, where the album reached number two on the sales chart. Sum 41 received another best group Juno nomination while Chuck won the 2005 Juno for best rock album and was certified double-platinum in Canada, platinum in Japan and gold in the US and Indonesia.

A live album titled Happy Live Surprise was released in Japan in 2005 and came out in Canada the next year under the title Go Chuck Yourself. Baksh announced that he was leaving Sum 41 in May 2006 so he could focus on his own band, Brown Brigade. The next album, Underclass Hero, was produced by Whibley and debuted at number one in Canada. It included the singles "Underclass Hero," "Walking Disaster" and "With Me" and was certified gold in Canada and Japan. It was nominated for a best rock album Juno.

A greatest hits compilation titled 8 Years of Blood, Sake and Tears was released in Japan in November 2008 and came out under the title All the Good Shit in the rest of the world in March 2009. It included the previously unreleased "Always" and a DVD featuring all of Sum 41's videos.

Gob guitarist Tom Thacker replaced Baksh in concert but not in recording the Whibley-produced Screaming Bloody Murder, which faced delays before arriving in March 2011. The title track and "Baby, You Don't Wanna Know" were issued as singles. Live at the House of Blues, Cleveland 9.15.07 was released in August 2011. Tour dates in South America, Europe and Asia in September and October 2011 were cancelled after Whibley was put "under doctor's orders to start a rehabilitation program and to recuperate for the rest of 2011." Sum 41 returned to the road in 2012 and started working on a new album in 2013.

Whibley married Canadian pop star Avril Lavigne in July 2006 and worked on her music before she initiated divorce proceedings in October 2009. McCaslin has released two albums with his other band, The Operation M.D.

Blackie and the Rodeo Kings