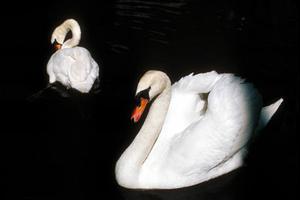 The mute swan, native to Eurasia, has become established as a breeding bird in Canada (Corel Professional Photos). 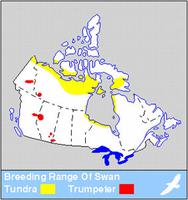 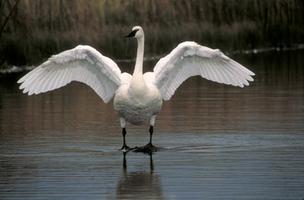 The voice of the trumpeter swan (loud and trumpetlike) helps differentiate it from the tundra swan (Corel Professional Photos).
PreviousNext

The swan is a large waterfowl with an elongated neck and narrow patch of naked skin in front of the eye. Swans have longer necks with more vertebrae (23-25), shorter legs and larger feet than geese, which they superficially resemble.

Swans (genus Cygnus), the largest members of family Anatidae, are found in north and south, temperate and arctic zones, including Australia and South America.

There is some dispute as to the number of genera. Seven species of true swans are recognized. Tundra and trumpeter swans (Cygnus columbianus and C. buccinator) are native to Canada.

The tundra swan breeds in the lower arctic islands, Mackenzie Delta, northern Hudson Bay and northeastern Manitoba. The trumpeter swan breeds in the Yukon, the Grande Prairie region of Alberta and the Cypress Hills. It has been reintroduced at Swan Lake, near Vernon, BC, and winters in western British Columbia. The mute swan (C. olor), native to Eurasia, has become established as a breeding bird in Canada.

The tundra swan, the most numerous swan in North America, has a population of about 200 000; the trumpeter swan, now greatly reduced, fewer than 15 000; the mute swan, perhaps 5000 feral individuals in North America.